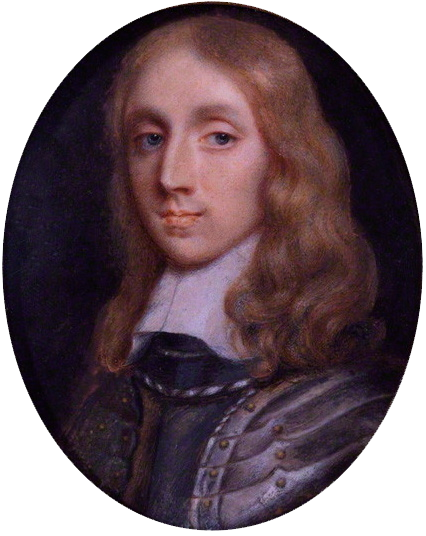 Ever since his own time it has been agreed that Richard Cromwell was not the man his father was, which may have been no bad thing. Born in 1626, he remained in the background as the Civil War ended, Charles I was executed and the Commonwealth established. After his marriage in 1649 he lived quietly among the Hampshire gentry, enjoying hunting and country pursuits, acting as a magistrate and playing an occasional minor role in local government. His father criticised him for his ‘idleness’ and his fondness for good living, which ran him into debt. He was 27 when his father became Lord Protector of the Commonwealth at the end of 1653.

Richard was now elected to the House of Commons as a member for Hampshire, but he did not take a prominent part in Parliament. Under the country’s new constitution, however, Oliver Cromwell was required to name his successor and from 1657 he began moving his son more into the public eye. Richard was appointed to the new second chamber of Parliament and to the council of state, both of which he conscientiously attended. Whether Oliver did or did not name Richard to succeed him is uncertain, but he fell seriously ill in 1658 and when he died in September, the council decided that the Protector had nominated Richard as his successor and unanimously declared ‘the Lord Richard Cromwell’ as head of state.

Oliver’s Secretary of State, John Thurloe, was said to have played a key role in this decision, but why the council reached it is unknown. Perhaps it was precisely the fact that Richard, still only 32, was not the dominating figure his father had been and not a military man. He was proclaimed as Lord Protector all over the country to general satisfaction. As John Thurloe put it: ‘There is not a dog that wags his tongue, so great a calm are we in.’

The calm did not last. The Commonwealth was probably on its last legs by this time in any case. It was deeply unpopular, the regime was heavily in debt and a gulf had opened up between the army and Parliament. The fact that Richard had little or no military experience and his lack of ostentatious godliness did him no good with many officers in the army, of which he was now officially commander-in-chief. According to some observers, a power struggle developed in the council between those who supported the military and Thurloe and others who did not. Parliament was summoned for January 1659 and the same conflict developed there, with the military fearing that a majority in the Commons would shrink the army in size and also chip away religious freedom.

According to Thurloe, in March there was ‘much underhand working’ going on ‘to disaffect the officers of the Army’. Things grew worse as Parliament refused to vote for the higher taxation needed to support the army at its current size and declined to release imprisoned Quakers. When the House pressed on with moves to reduce and reorganise the army and take a tighter grip on it, senior officers demanded that the Protector send Parliament packing. Richard refused and the officers massed troops threateningly in Westminster. Richard gave way and dissolved Parliament in the early hours of April 22nd.

He remained Protector in name, but the army had taken control and, though treated with outward respect, Richard seems to have been living under house arrest in Whitehall Palace. The army summoned the surviving members of the old Rump Parliament back to Westminster and Richard’s great seal as Protector was formally destroyed in the House of Commons on May 14th. Accepting Parliament’s offer to treat him honourably, pay his debts of close to £30,000 (equivalent to nearly £4 million today), and provide him with a pension, he formally resigned his office in a letter that may have been dictated to him. Promising to support the new regime, he wrote that ‘I trust my past Carriage hitherto hath manifested my acquiescence to the Will and disposition of God, and that I love and value the Peace of this Commonwealth much above my own concernments’.

Unkind nicknames – ‘Tumbledown Dick’ and ‘Queen Dick’ – failed to recognise how impossible Richard’s situation had been. He now retired to Hampshire. The new regime failed to pay his debts or his pension and when Charles II was welcomed back to the throne to popular rejoicing the following year, Richard went into exile abroad, possibly more to avoid his creditors than the Stuart regime, which made no attempt to harass him. He returned to England after 20 years or so. His wife was dead by then and he spent the rest of his long life unobtrusively in a succession of lodgings until he died at the age of 85 at Cheshunt in Hertfordshire in 1712.