Having made many powerful enemies, the Dominican friar and puritan fanatic Girolamo Savonarola was executed on 23 May 1498. 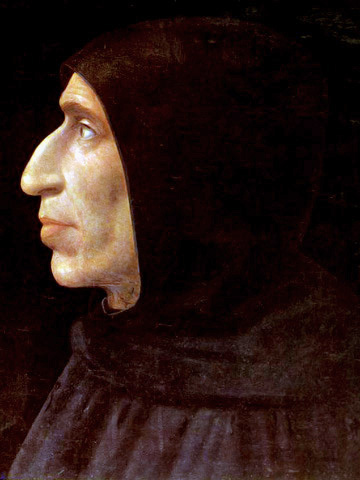 Girolamo Savonarola, Dominican friar and puritan fanatic, became moral dictator of the city of Florence when the Medici were temporarily driven out in 1494. Sent to Florence originally a dozen years before, he made a reputation for austerity and learning, and became prior of the convent of St Mark (where his rooms can still be seen). A visionary, prophet and formidably effective hellfire preacher, obsessed with human wickedness and convinced that the wrath of God was about to fall upon the earth, he detested practically every form of pleasure and relaxation.

His opponents called Savonarola and his followers ‘Snivellers’ and he grimly disapproved of jokes and frivolity, of poetry and inns, of sex (especially the homosexual variety), of gambling, of fine clothes and jewellery and luxury of every sort. He denounced the works of Boccaccio, nude paintings, pictures of pagan deities and the whole humanistic culture of the Italian Renaissance. He called for laws against vice and laxity. He put an end to the carnivals and festivals the Florentines traditionally enjoyed, substituting religious festivals instead, and employed street urchins as a junior gestapo to sniff out luxurious and suspect items. In the famous ‘bonfire of the vanities’ in 1497 he had gaming tables and packs of cards, carnival masks, mirrors, ornaments, nude statues and supposedly indecent books and pictures burned in the street. The friar also disapproved of profiteering financiers and businessmen.

Not surprisingly, Savonarola made many powerful enemies. Among them was the Borgia pope, Alexander VI, who had good reason to feel uncomfortable with the Dominican’s denunciation of the laxity and luxury of the Church and its leaders, and who eventually excommunicated the rigorous friar. On Palm Sunday in 1498 St Mark’s was attacked by a screaming mob and Savonarola was arrested by the Florentine authorities with two friars who were among his most ardent followers, Fra Dominico and Fra Salvestro. All three were cruelly tortured before being condemned as heretics and handed over to the secular arm by two papal commissioners, who came hotfoot from Rome for the purpose on 19 May. ‘We shall have a fine bonfire,’ the senior commissioner remarked genially on arrival, ‘for I have the sentence of condemnation with me.’ 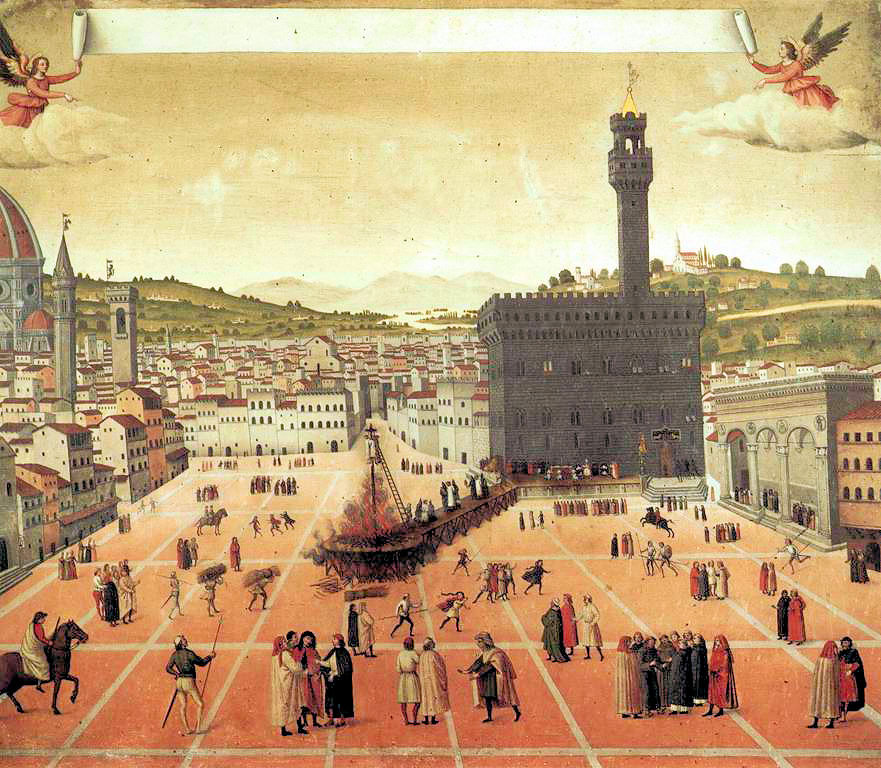 On the morning of 23 May a crowd of Florentines gathered in the Piazza della Signoria, where a scaffold had been erected on  a platform (a plaque marks the spot today). From the heavy beam dangled three halters, to hang the friars, and three chains, to support their bodies while they were subsequently burned to ashes. Wood for the burning was heaped up below. Some of the crowd screamed abuse at Savonarola and his two companions, who were formally unfrocked and left in their under-tunics with bare feet and their hands tied, before their faces were shaved, as was the custom. It is said that a priest standing near asked Savonarola what he felt about this approaching martyrdom. He answered, ‘The Lord has suffered as much for me,’ and these were his last recorded words.

Fra Salvestro and Fra Domenico were hanged first, slowly and painfully, before Savonarola climbed the ladder to the place between them. The executioner made cruel fun of him and then apparently tried to delay his demise so that the flames would reach him before he was quite dead, but failed, and Savonarola died of strangulation at about 10am. He was forty-five years old. With the piles of wood below the scaffold set alight, the flames quickly engulfed the three dangling bodies while a trick of the heat made Savonarola’s right hand move so that he seemed to be blessing the spectators. Some of them burst into tears, but others, including excited children, sang and danced delightedly around the pyre and threw stones at the corpses. What little was left of the three Dominicans was thrown into the River Arno. 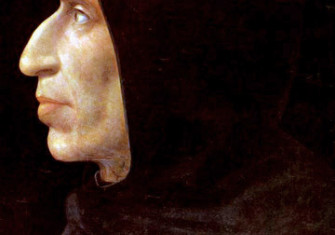