No Island is an Island

The world does not influence Britain’s native culture, the world is its culture, as anyone with a grasp of the country’s history will understand, argues Suzannah Lipscomb.

History Today in October 2016): the day that the Viking King Cnut of Denmark became King of England.

Reflecting on the kingdom that was created by the union of these two countries, Kjær told his audience that the borders of England and of Britain are not natural, but historic constructions. Historical evidence suggests that British elites drew on a pan-European culture. England could have remained part of a nation that included Scandinavia, or joined a nation that included parts of France. ‘National borders and identities’, Kjær remarked, ‘are no more than froth on the coast of history, waiting for a fresh wave of the North Sea to wash them away.’ European influences have been part of the constant narrative of Britain’s history.

How far does the history of our country truly reflect this? At a time when issues of immigration and religious and cultural differences seem deeply problematic, it is worth considering the historical data.

The story we can glimpse through three vignettes from the history of the capital is one of a city built on immigration, ethnic diversity and global influence. The Tower of London was built by immigrants: the Normans. In 1078, to signal the might of Norman rule, William the Conqueror even had the White Tower constructed in stone imported from Caen. This marked the beginning of the dominance of French culture over England’s elites: not until 1216 did the country have a king born on native soil – Henry III. And not until Edward III in 1327 did England have a king who spoke English.

London has also been ethnically diverse for far longer than we might suspect. By 1600, as Miranda Kaufmann has shown, there were around 360 black Africans living in London. There are 2,000 or so references to black or Asian Londoners in the baptismal registers of the parishes of London and Middlesex between 1597 and 1856. Gylman Ivye, described as a ‘negro’ or ‘Ethiop’, had two children, Elizabeth and Richard, with Anna Spencer of Dyrham, Gloucestershire in 1578 and 1581 and, in October 1616, George, a ‘blackamoor’, married Marie Smith in Kent. David Olusoga’s work on black British history over the last 1,800 years has started to reveal the full extent of this story of integration.

At the same time, London was being influenced by global culture. Jerry Brotton has also brought to light the Elizabethan links with the Islamic world, including the Moroccan ambassador, Abd-el-Ouahad ben Messaoud ben Mohammed Anoun, who stayed on the Strand for six months, during which time he had his portrait painted and tried to negotiate a military and commercial alliance between Moroccan Sunni Muslims and Protestant England against Catholic Spain. In the same year, Shakespeare wrote Othello and Brotton has shown that Elizabethan England was flooded with new ideas, words and products from the Islamic world. It never was an isolated ‘sceptred Isle’.

Yet London also bears testament to a tendency to blame foreigners for all evils. St Lawrence Jewry, next to Guildhall, named after the nearby Jewish quarter, is a reminder of the expulsion of the Jews from England in 1290, well before the Spanish expulsion of 1492. In 1517, there were riots in London against immigrants, which erupted during the May Day celebrations at St Andrew Undershaft (so called because of the maypole erected alongside the church every spring). The Great Fire of London was blamed on ‘popish’ foreigners, as the Monument once stated. That is well before we get to the Gordon Riots of 1780 or the Notting Hill race riots of 1958. The history of London has never been one of purely peaceful coexistence.

But it is only in this chequered mix of immigration and integration, of ill will and imitation, that Britons find ourselves and their heritage. There is no unique English or British culture or history distinct from the influence and presence of continental Europeans and other foreigners. As Kjær put it, European influences ‘are not things that happen to a stable native culture: European influences are our native culture’.

Suzannah Lipscomb is Senior Lecturer in Early Modern History at New College of the Humanities.

This article has been corrected. It originally stated that by 1600 there were 900 black Africans living in London. 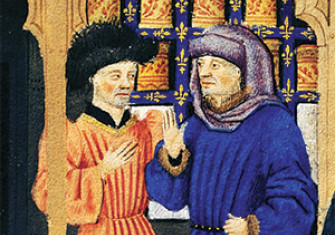