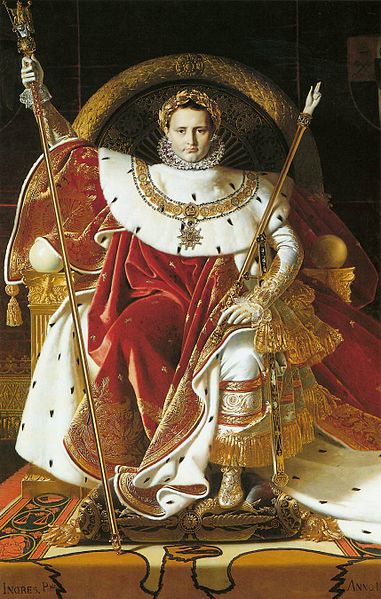 The coup of 18/19 Brumaire in the Year VIII of the republican calendar is generally taken to mark the end of the French Revolution and the beginning of Napoleon Bonaparte's dictatorship. The Corsican had returned from Egypt on October 9th. His success in evading the British confirmed the growing belief in Napoleon's 'star'. In Paris he had a furious row with his wife, Josephine, who had been enjoying a love-affair in his absence, but they made up, and he went about with studious modesty while speculation about his intentions grew feverish.

The regime which Bonaparte was about to bring down was the Directory, a committee of five, which had been set up in 1795 after the fall of Robespierre. The Directors were Paul Barras, a former lover of Josephine Bonaparte and a byword for cynicism and corruption; the Abbé Sieyès, an industrious political theorist; a general named Moulin; Roger Ducos, a protégé of Barras; and a lawyer called Gohier.

The government was bankrupt, while inflation, taxation and unemployment were soaring. The regime had lost control in much of the country, and there was virtual civil war in some areas. There were fears of both a Jacobin resurgence and a royalist restoration, and Barras was rumoured to be planning to sell the country back to the Bourbons.

On October 23rd, the first day of Brumaire, Napoleon's elder brother, Lucien Bonaparte, was elected president of the Council of Five Hundred, one of the two assemblies set up under the 1795 constitution. The other was the Council of Elders, with 250 members. Inside the Directory itself, Sieyès was determined to introduce a new system. He and Napoleon agreed to work together. Sieyès totally underestimated the younger man in imagining that Bonaparte would tamely serve his purposes. Talleyrand, the former and future foreign minister, and the police chief Joseph Fouché were both involved in the coup. The banker Jean-Pierre Collot put up the money.

Action began when Sieyès announced the discovery of a Jacobin plot. The two assemblies, alarmed, moved from central Paris and the dreaded Parisian mob to the former Royal palace at Saint-Cloud. To ensure their safety they put General Bonaparte in command of all troops in the capital and he moved 6,000 men into place around the palace under his future Cavalry commander Joachim Murat. Barras resigned and Talleyrand pocketed the two million francs he had been given to bribe him if required. Sieyès and Ducos also resigned and Moulin and Gohier were put under house arrest.

The Directory was dead and the plotters' plan was that next day, November 10th, the assemblies should put a new executive in place, but the deputies irritatingly argued until Napoleon lost patience. He stumped in to the hall of the Elders and made a speech defending himself against charges of being a Caesar or a Cromwell. Making little impact, he marched angrily into the Orangery, where the Five Hundred were in session. In fury at this intrusion, some of them pummelled him, bawling 'Outlaw!', 'Down with him!', and 'Kill, kill!' Shaken and bleeding from a scratched face, the general retreated. It was, he afterwards admitted, one of the few occasions in his life when his nerve failed him.

The conspiracy was saved by Lucien Bonaparte, who came out and addressed the soldiers guarding the assembly. He told them that some deputies, probably in the pay of perfidious Albion, had terrorised the majority and tried to assassinate the general. Putting his sword dramatically against his brother's breast, Lucien swore to kill him if he ever tried to destroy French freedom. The guards, suitably impressed and not anxious to antagonise Murat's men outside the palace, advanced to clear the Orangery. The deputies left in some haste, some by jumping from windows. A few hours later Lucien scoured the locality for a compliant remnant of the two assemblies -- some deputies were found still hiding beneath bushes in the park -- who obediently appointed three Consuls to run the government while a new constitution was prepared. The Consuls were Sieyés, Ducos, and Napoleon. They agreed to preside in turn, but there was little doubt whose hands now held power.

On December 13th the new constitution was formally proclaimed, with Napoleon as First Consul with full executive powers. Five years later he would be Emperor of the French.