A mutual defence treaty between Communist states was signed on 14 May 1955. 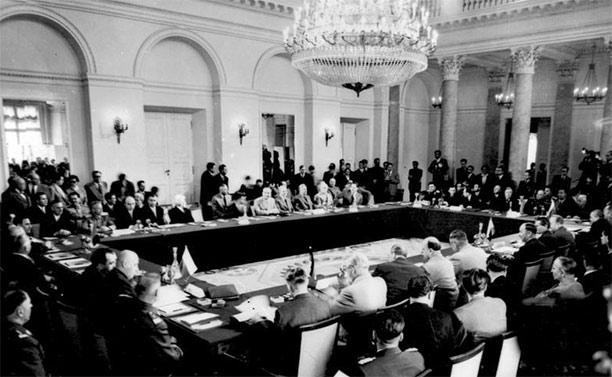 The Treaty of Friendship, Co-operation and Mutual Assistance concluded after three days of discussions in Warsaw created a belated eastern military counterpart to the western powers’ North Atlantic Treaty Organization. In particular, it was a reaction to West Germany becoming an independent nation and joining NATO. The Soviet Union’s delegation to Warsaw was led by the premier, Nikolai Bulganin, with foreign minister Molotov and two formidable military men in Marshals Zhukov and Koniev. The prime ministers of the Ukraine, Belorussia, Latvia, Lithuania and Estonia were also dutifully present, along with a Communist Chinese general as an observer. The treaty was duly signed by the Soviet Union and seven obedient eastern European states: Albania, Bulgaria, Czechoslovakia, East Germany, Hungary, Poland and Romania, whose prime ministers and defence ministers all attended the conference. Yugoslavia was conspicuously absent.

The pact’s main object was to keep the Soviet empire in being and the satellite states in line, and the key provision was the one which gave Moscow the right to go on keeping troops stationed in the satellite countries. The treaty was to last for twenty years in the first instance or until an acceptable East-West security pact came into being. Renewed in 1975 and again in 1985, it provided for a unified military command, initially under Marshal Koniev, dominated by the Red Army and with its headquarters in Moscow. Weapons were standardized and Red Army military manuals introduced, with joint training, annual manoeuvres and Red Army-style uniforms. The treaty committed the members to come to each other’s immediate assistance if attacked and to consult among themselves on important international questions related to their common interests, and there was a political consultative committee made up of the members’ Communist party secretaries. Other states declaring ‘their readiness to assist the efforts of the peace-loving States for the purpose of safeguarding the peace and security of nations’ were welcome to join. None did.

The continued presence of Soviet troops in the member countries exacerbated discontent in Poland and Hungary, where there was trouble in 1956, but enabled the Soviet regime to deal with dissent the more readily. In Poland, Nikita Khruschev backed away from a confrontation, but not in Hungary, where the government’s determination to withdraw from the Pact was met with force and in Budapest people fought Soviet tanks with their bare hands. The treaty was invoked in 1968 when the Soviet Union moved Warsaw Pact troops from Poland, East Germany, Hungary and Bulgaria into Czechoslovakia to regain control of the regime in Prague. Suitably enough, it was in Prague at a conference of representatives of the remaining member states in July 1991 that the Warsaw Pact was officially pronounced dead.