Saint Marie-Bernarde Soubirous saw the first of her 18 'visions' in Lourdes on 11 February 1858. 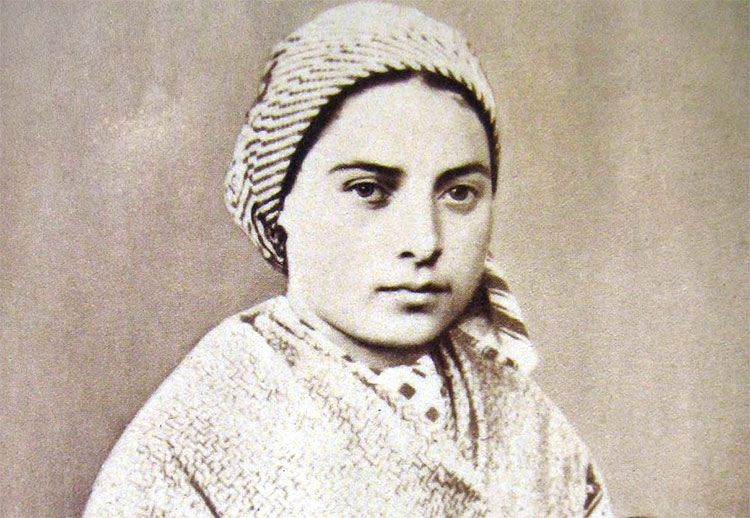 Lourdes in 1858 was an inconspicuous little French town on the Gave de Pau River at the foot of the Pyrenees, with around 4,000 inhabitants. One of them was a former miller named François Soubirous, who had fallen on hard times. He and his wife Louise had six children. The eldest was their daughter Marie-Bernarde, known as Bernadette. Desperately poor, the family lived squashed into one small room. Bernadette spent part of her childhood brought up by an aunt, had little in the way of schooling and was unable to read or write.

Bernadette went back to the grotto seventeen more times and saw the Lady, though no one else ever did. Her story spread round the town like wildfire. The Lady was generally assumed to be the Virgin Mary and more and more townspeople began to go to the grotto with Bernadette, but there was considerable scepticism, from the parish priest among others.

On February 25th the Lady told Bernadette to drink the water of a spring that flowed under her rock. As there seemed to be no spring, Bernadette dug in the ground. Nothing happened, but a day or so afterwards the water started to flow. Bernadette drank it and washed in it and others did the same and the water acquired a reputation for healing properties. The spring is still flowing at the rate of 32,000 gallons a day, but analysis of the water has found nothing remarkable about it.

On February 27th and March 2nd the Lady told Bernadette that the priests should be told to build a chapel at the site and have people come there in processions. Word of what was going on reached the French newspapers and the crowds acompanying Bernadette to the grotto swelled to thousands and had to be controlled by the police.

On the feast of the Annunciation of the Virgin Mary on March 25th, the Lady at last proclaimed her identity. Speaking to Bernadette in the local Lourdes patois, she said ‘I am the Immaculate Conception’. The doctrine of the Immaculate Conception had been proclaimed only a few years before, in 1854. Bernadette saw her last apparition on July 16th, the feast of Our Lady of Mount Carmel.

Bernadette was rigorously cross-examined by the local police, but stuck to her story. The authorities were sceptical and in 1858 the town mayor had the grotto and the spring barricaded off, allegedly on grounds of hygiene. In 1862, however, after a thorough enquiry by a Church commission, the local bishop decided that the visions were genuine and approved the cult of Our Lady of Lourdes. A church was started the same year. Bernadette spent much of the rest of her life in the convent of the Sisters of Charity at Lourdes, where she died in 1879 at the age of thirty-five. She was beatified in 1925 and canonized in 1933.

Pilgrims began flocking to Lourdes from all over France and 100,000 people attended the consecration of the church in 1876. The town was to become one of the Christian world’s most celebrated pilgrimage centres and the numbers increased to such a degree that a second church was begun in 1883. The centenary year of 1958 brought six million pilgrims to Lourdes and the usual annual figure is said to be five million. Many of them are sick and hoping to be healed. The first cure was reported in 1858 and in 1861 a commission of enquiry pronounced fifteen of a hundred reported cures to be miraculous.

Bernadette’s body was exhumed in 1909 and was found ‘incorrupt’. Reburied in a new casket, she was exhumed again in 1919 and the body was still well preserved, though the face was slightly discloured. She was exhumed yet again in 1925 and reburied in the Chapel of St Bernadette in the Sisters of Charity convent which is visited by huge numbers of pilgrims.