In Search of Michael Wood

Historian and film-maker Michael Wood recently visited Bristol Grammar School to talk about the BBC2 series The Story of India. Before the event began he was interviewed by sixth-form students Imogen Parkes and Nicholas Barrett; Oliver Chard transcribed the tape.

Cartoons can allow us to see ourselves as others see us, often uncomfortably. Mark Bryant looks at cartoons produced across Europe about Britain’s involvement in an unpopular war in South Africa at the turn of the twentieth century.

Janet Voke describes how fifty tons of gold were evacuated from Norway four hours ahead of the Nazi invasion in spring 1940.

Sheila Rowbotham introduces the ‘hands-on’ utopian, C.R. Ashbee, and the Guild of Handicraft he established in 1888, shedding light on late nineteenth and early twentieth century Arts and Crafts ideas about work, consumption and society.

Jason Burke describes how war correspondents benefit from a knowledge of history, and how history might benefit from their work in turn.

Peter J. Beck describes the work of Honoré Daumier, born 200 years ago this month, which provided an early visual documentary newsreel and commentary on the key political and social movements in mid-nineteenth century France.

Mark Knights and a team of colleagues introduce a new method of working for researchers and students.

The Orsini Affair and the Crisis of 1858

Terry Jenkins explains why a failed assassination attempt on Napoleon III brought down the British government in 1858.

Charles Freeman explains why AD 381 was a defining moment in the history of European thought.

The Right to Choose: Women, Consent and Marriage in Late Medieval England

Jeremy Goldberg examines three stories of disputed marriages and discusses definitions of consent and how they impinged on a medieval woman’s right to marry when and whom she chose. 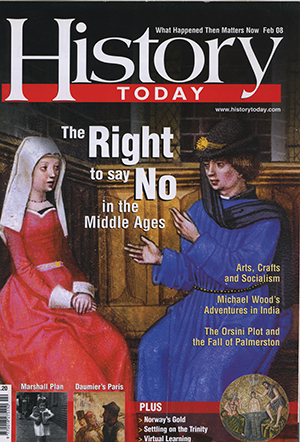