Richard Cavendish records how Germany sank its own navy in the aftermath of the First World War, on 21 June 1919. 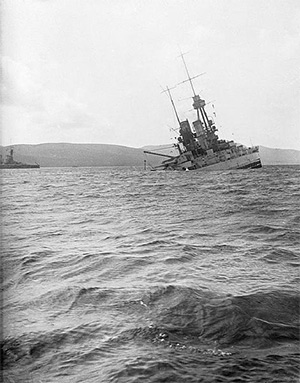 The handing over to the Allies of the German high seas fleet was one of the terms of the armistice that ended the First World War in November 1918. The arrangements for the surrender were worked out a few days later between Admiral Sir David Beatty for the Allies and a German rear-admiral named Hugo Meurer along with four other German naval officers. Privately, Beatty felt sorry for his former foes but it was a tense moment when 70 German battleships, cruisers and destroyers under the command of Rear-Admiral Ludwig von Reuter arrived on the Scottish coast off the Firth of Forth on November 21st. Beatty’s ships were at action stations ready for anything the Germans might try.

After the Germans had been shepherded in to anchor at Rosyth, north-west of Edinburgh, Beatty signalled them that the German flag was to be hauled down at sunset and not hoisted again without permission. All passed off peacefully and Beatty wrote to his wife: ‘Well, Pansy, we have met the High Seas fleet at last ... It has been misty all day and that rather impaired the spectacle as we could never see more than about half a dozen big ships and a dozen or so of the destroyers at one time.’ Altogether he considered it an ‘unutterably dull and monotonous’ day for most of those involved.

The Allies had not yet decided what exactly was to happen to the German ships. They were moved to Scapa Flow in the Orkneys to be interned until the peace arrangements were settled. Four more German warships arrived in the next few weeks, making 74 altogether, manned by some 20,000 German seamen. Most of them were gradually sent back to Germany and the caretaker crews that were left were forbidden from going ashore or visiting other ships. Food supplies arrived from Germany twice a month plus plenty of cigarettes and alcohol. Some fraternising went on between the German and British seamen, to which the authorities sensibly turned a blind eye, but the German officers had trouble keeping control of their bored and mutinous men as the months went by while discussions about the fate of their ships continued at the peace conference in Paris. The French and the Italians wanted some of the ships for themselves but the Americans did not approve and nor did the British who wanted them all destroyed.

On June 17th, 1919 Von Reuter prepared to scuttle his fleet to prevent the British from seizing it. The British were planning to do exactly that on June 23rd but, on the morning of a beautiful sunny midsummer day, Von Reuter gave the order to scuttle. All his ships hoisted the German flag, the seacocks, portholes, watertight doors, hatches and torpedo tubes were opened and the crews now totalling fewer than 2,000 men took to their lifeboats as the ships began to sink with tremendous hissings of steam, spouts of water and huge sucking and gurgling sounds. A party of Orkney schoolchildren on an outing in a small steamer had an unforgettable view of the battle fleet foundering.

The few British ships on guard in the harbour boarded some of the German ships to try to stop the scuttling, towed some of them into shallower waters and beached them or tried to force German sailors back onto their vessels. The two sides came to blows, leaving German casualties reported as nine killed and 16 wounded. It was the war’s final death tally. The Royal Navy regarded the scuttling as a blessing in disguise as it disposed of the question of how to redistribute most of the ships among the Allies while German officers felt that the stain of surrender to the British had been erased.

Of the German ships, 52 were sunk, some of them with their upper works still visible above the water. The rest either stayed afloat or were beached and the islanders, in the traditional fashion, quietly helped themselves to anything useful. The surviving ships were later parcelled up among the Allied navies. The sunken ones were left on the bottom and a few of them have remained there ever since to become a focus for diving expeditions. In the 1920s, however, salvage attempts started and a swashbuckling young British scrap-metal dealer called Ernest Cox bought two sunken battlecruisers and 26 of the destroyers from the Admiralty and began operations to refloat them. He had divers patch holes in the hulls and then pumped air into them so that they could be towed away to yards at Rosyth and Lyness where they could be profitably broken up. He bought more ships later but his task proved difficult and expensive. By 1931 he had managed to salvage more than 30 ships and decided he had had enough. Cox was known to his death in 1959 as ‘the man who bought a navy.’