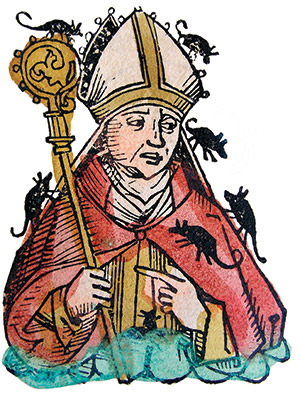 After the death of Charlemagne in 814 the Carolingian empire was broken up by his competing sons and grandsons. In 843 most of the territory east of the Rhine – the nucleus of modern Germany – was split off as the kingdom of the East Franks. Within it were various semi-independent lordships, of which the most important from north to south were Saxony, Franconia and then Swabia, with Bavaria to its east.

The future Hatto I, a Benedictine monk from a noble family in Swabia, was the trusted adviser of the East Frankish king, Arnulf of Bavaria, who in 891 made him Archbishop of Mainz in Franconia. He accompanied Arnulf on invasions of Italy in the mid-890s and was tutor to Arnulf’s son, known as Louis the Child. When Arnulf died in 899 and Louis inherited the East Frankish throne at the age of six, Hatto took over the regime as regent.

A forceful character in the complicated politics of the time, Hatto believed in a strong central monarchy and it seems he could be ruthlesss.

There was a feud in Franconia between two families, one headed by Duke Conrad the Elder and the other by the rival Babenbergs, and Hatto took Conrad’s side. In a battle in 906 Conrad and two of the three Babenberg brothers were killed. It was said that Hatto called the remaining Babenberg brother to court with a guarantee of safe conduct and then had him beheaded. When Louis the Child died in 911, Hatto made sure that Conrad the Younger of Franconia succeeded as king of the East Franks.

Hatto died two years later, aged about 63, and improbable stories began to spread about his death. As punishment for his evil deeds, supposedly, he was struck by lightning or thrown into the crater of Mount Etna by the Devil. The weirdest tale was that he was overwhelmed and eaten alive by an army of mice, which he deserved because of his cruel treatment of the poor during a famine. The same story was later told of one of his successors, Hatto II of Mainz in the 10th century, presumably because they had the same name. Attacked in his home by innumerable mice, the archbishop fled to a tower on an island in the Rhine near Bingen. He hoped the mice could not swim, but they swarmed across and though many drowned the rest gained the island, gnawed through the tower’s doors and scampered up the stairs to the top floor where Hatto was hiding. There they devoured him bite by tiny bite. The tower is known to this day as the Mäuseturm, or Mouse Tower.