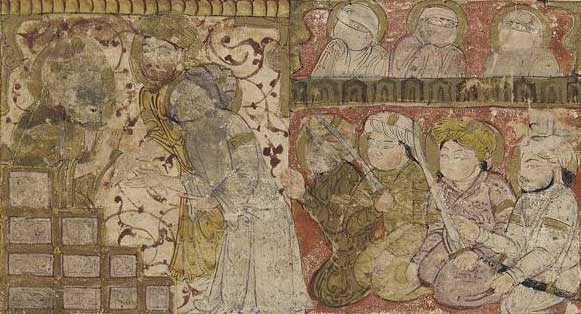 The first two caliphs, or ‘successors’, to the Prophet Muhammad, who left no male heir when he died in his early sixties in 632, were Abu Bakr and Umar, who presided over the campaigns which carried Islam outside Arabia into Palestine, Syria, Mesopotamia, Persia, Egypt and North Africa. Both men had been friends and disciples of Muhammad since the early days in Mecca and they were the fathers of two of his wives. Another obvious candidate for the caliphate was Ali ibn abu Talib, Muhammad’s young cousin and adopted son, who married Muhammad’s daughter Fatimah. Their two sons were the prophet’s only male descendants.

However, when Umar died in November 644 the tiny group of disciples responsible for choosing the new caliph passed over Ali and selected a seventy-year-old, Uthman ibn Affan, a merchant prince of Mecca, who had been another early convert. Barnaby Rogerson suggests in his book, The Heirs of the Prophet Muhammad that there may have been an uneasy feeling that the choice of Ali could make the caliphate hereditary. Uthman was no warrior, but he was an efficient administrator. His most influential achievement was the creation of the first definitive written edition of the Koran, completed by 650. Discontent mounted, however, over the favour Uthman showed to his own Ummayad family, who seemed to enjoy a monopoly of influential and lucrative appointments.

In 656 armed men from Egypt arrived in Medina and demanded the dismissal of the Egyptian governor, which the caliph pretended to grant. On their way back to Egypt, however, they caught an African slave, a messenger from Uthman riding fast to the governor and carrying orders for their leaders’ execution when they reached home. They went back to Medina, stoned Uthman in the mosque and knocked him unconscious, and then besieged him in his house. The elderly caliph told his friends and servants not to resist, to spare their lives, and the rebels broke in and stabbed him to death. His own treasured copy of the Koran was soaked with his blood.

Ali was appointed caliph, but was murdered in 661, when the caliphate was taken over by Muawiya, the Ummayad governor of Syria. This began the major split in Islam between the Shia, who regard Ali as the Prophet’s true heir, and their opponents, the Sunni. It has lasted ever since and its murderous consequences are all too evident now in Iraq.