Access to land was once a common right; we have lost more than just the freedom to roam.

Enclosure in Britain was a long, slow process. Bit by bit and then all at once, swathes of the countryside were fenced off for the exclusive use of landowners. It arguably began with the Norman Conquest but accelerated in the 18th and 19th centuries when, in the name of modernisation and industrialisation, enclosure was formalised by Acts of Parliament – a Parliament which was, of course, filled with landlords. This process of rescinding common right transformed ancient ways of life. In doing so, it created workers dependent on waged employment, limiting not just their use of the land but also how they spent their time and for whose profit.

The spirit of enclosure continues today and is an ongoing process. Each extension to laws of trespass or new limitation on rights of way continues the centuries-old work of putting up fences. This became especially visible during the pandemic, with lockdown walks hemmed in by ‘no trespassing’ signs. There has since been a resurgence of right to roam protests, asking us to consider alternative ways to think about our natural resources.

It is difficult to imagine a time when access to land was a common right. J.M. Neeson, historian of enclosure and the commons, wrote that the first problem in understanding this seismic reshaping of our landscape is one of imagination: the commons are lost to us and with them the ways of seeing the world they depended upon and created. But there are witnesses to the coming of enclosure, artists and writers who captured images of the world as it changed and who can help us think back to a time when the natural world was a shared resource.

This oft-quoted folk song reveals something of the feelings of loss and anger that swirled around enclosure, as well as the power structures that allowed it to happen:

Though an English song, it was well known in Ireland, too. Enclosure criminalised ancient ways of life and perpetuated theft, legitimised by law. Poaching could be punished by deportation. This song echoes the pastoral poet John Clare’s heartbroken denunciation in ‘The Mores’ (1820) of ‘lawless law’s enclosure’. Though there are many explanations for Clare’s struggles with mental illness, the loss of nature looms large in his work as a source of anguish and estrangement. He wrote from the asylum: ‘People tell me I have got no home in this world.’ For Clare and many others enclosure meant something like a spiritual homesickness.

Jean-François Millet’s The Gleaners (1857) is sometimes interpreted as a simple image of backbreaking labour, but it shows us a communal life already endangered when Millet painted it. Gleaning was a right which allowed access to the remnants of the harvest, mitigating against waste and want, allowing a living to people (often women) who needed it. It faded out with enclosure. In The Gleaners and I (2000) the filmmaker Agnes Varda points out the communal aspect of women working side by side. When she says ‘there is another woman gleaning in this film, that’s me’, she claims lineage with workers of the commons, in making something out of the leftovers, challenging ideas of usefulness and paying attention to life on the margins.

In Ways of Seeing (1972) the writer John Berger points out the role oil painting played in celebrating land ownership – it renders it in ‘all its substantiality’. A painting can itself become a valuable piece of property. Thomas Gainsborough’s Mr and Mrs Andrews (c.1750) plays on and subverts the idea that art should celebrate private property. The sitters pose in front of their land, which rolls away into the distance. Their proprietorial attitude is palpable, not merely complacent but practically sneering. But their clothes are rumpled and limp, their expressions sour and behind them the blue sky darkens; this is not a flattering likeness by any stretch of the imagination. Fences run across the middle of the landscape, cutting it in two. To underline the point, in episode three of the TV version of Ways of Seeing, Berger draws a ‘keep out’ sign above their heads.

The shift in values which marks the enduring legacy of enclosure can be seen in the word common itself, which means ‘shared’ but also means ‘ordinary’. Today it is often used as an insult. Contemporary critics and subsequent historians weighed the value of the commons in terms of the vocabulary of the market. They could not believe, as Neeson writes, that commoners were really content with merely ‘enough’, when their own watchword was ‘growth’.

A substantial reversal of enclosure is unlikely. Yet lessons might be learnt from the concept of the commons, even if it is only that it allows us to imagine life beyond the dogmas of the market: community over growth, a right to nature, connection rather than more boundaries. As John Clare put it:

These paths are stopt – the rude philistine’s thrall
Is laid upon them and destroyed them all
Each little tyrant with his little sign
Shows where man claims earth glows no more divine
But paths to freedom and to childhood dear
A board sticks up to notice ‘no road here’.

Camilla Cassidy is Senior Lecturer in the Humanities at Leuphana University of Lüneburg. 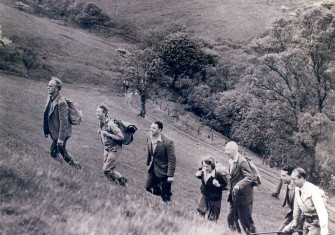 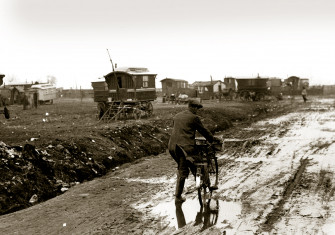 Rough Roads for Travellers and Gypsies