The Sharp siblings show the power of family to help and support each other towards greatness. 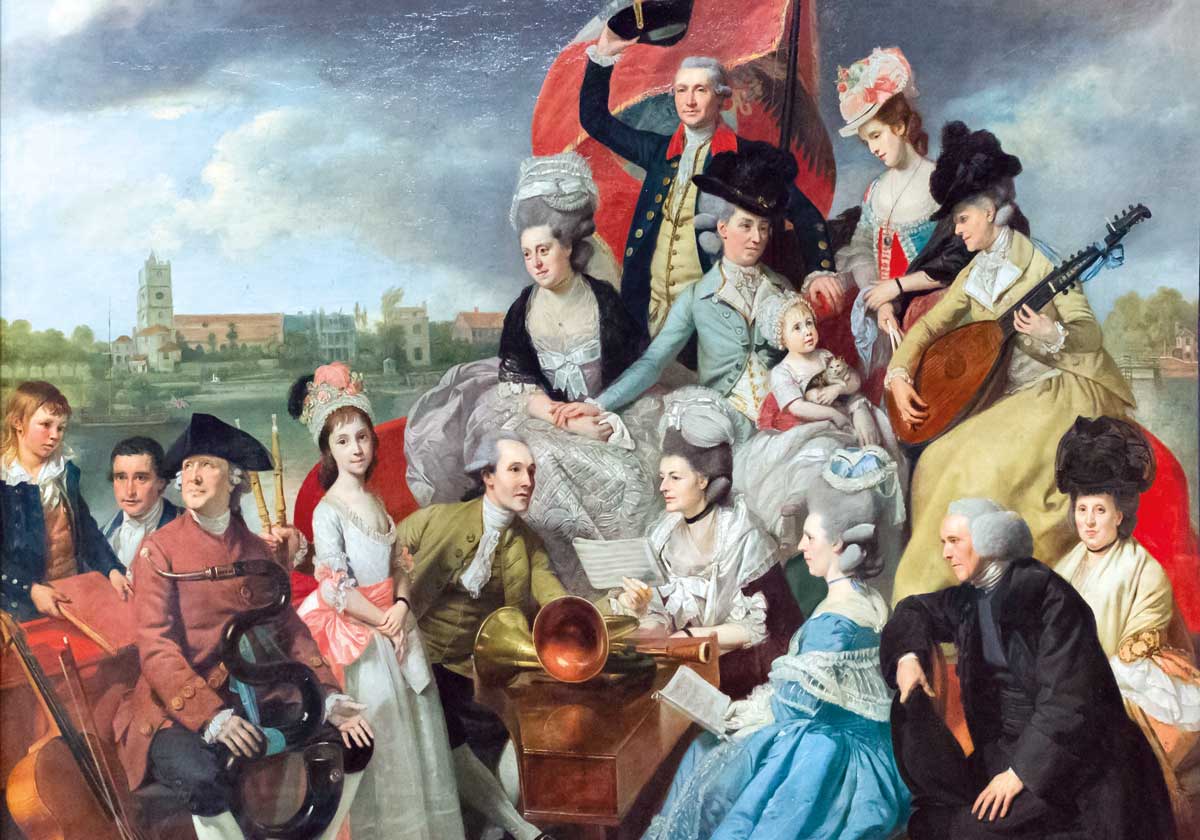 The Union, ‘a most capacious and elegant pleasure yacht’, set sail from Kew Bridge on 29 August 1777 to begin a 12-day maiden voyage. As she plied her course along the Thames to Reading, her passengers enjoyed the amenities of a ‘Convenient Cook Room’, bedchambers, a State Room, a butler’s pantry and two water closets, while being entertained by an orchestra. At Windsor, George III and Queen Charlotte drank tea on deck and Lady Onslow entertained the party with a concert starring the Duke of Cumberland on first violin. On the return journey, David Garrick came on board for a cup of chocolate, as the yacht lay anchored by the actor’s riverside Temple to Shakespeare at Hampton.

Contrary to appearances, William Sharp, the owner of the Union, was not a gilded aristocrat of independent means, but a hardworking London surgeon from a relatively humble background. He was accompanied on the voyage by four of his six siblings. The event demonstrates both the extent of the surgeon’s professional and social success and the part which his family played in it.

The son of an archdeacon, William grew up with his three brothers and three sisters in a rectory near Rothbury in Northumberland, where they forged bonds of loyalty and affection that would endure throughout their joint lives.

Today the siblings are known principally as the subject of Johan Zoffany’s celebrated group portrait, The Sharp Family, which William commissioned in 1779. The portrait, which depicts the seven siblings playing music together on a barge on the Thames at Fulham, offers a representation of the Sharps at the height of their social success, while the harmony of its composition is an apt metaphor for the strong ties that bound them together.

But the Sharps were also remarkable individuals in their own right and their lives illumine the age in which they lived. John, the eldest brother, established an extraordinary social enterprise at Bamburgh Castle in Northumberland, providing free healthcare and education and subsidised food to the poor, while also commissioning the first known lifeboat; James was a visionary manufacturer, inventor and canal pioneer; Elizabeth ran a large estate in Northamptonshire on the philanthropic principles espoused by her brothers; William was a fashionable surgeon, but he also ran a free surgery for the poor of London; and Granville, the youngest brother, is remembered as a leading abolitionist – his chance encounter with the enslaved boy Jonathan Strong set him on a course that would culminate in one of the great set pieces of English legal history – and the judgment, delivered by Lord Mansfield in Westminster Hall, that a slave becomes free on British soil.

As well as their individual achievements, the Sharps were also a famously musical family, and it was this that Zoffany evokes in his portrait. They played music together from early childhood and between them mastered a dazzling array of instruments. Granville, for example, was a proficient on the hautbois, clarinet, flute, double flute (an instrument requiring the performer to play two parts of music simultaneously), kettledrums and traverse harp. William gave renowned concerts at his mansion in the City, featuring performances by the most sought-after virtuosi of their day; and in the summer months the family hosted water parties on barges sailing up and down the Thames. The star of these occasions was the Sharp band, led by the Italian violinist Felice Giardini, in which family members played alongside professional musicians. To the rousing strains of a Handel overture, the Sharp barge would glide sedately upriver, accompanied by a ‘great number of boats with companey’ who turned out to enjoy the festivities of the day.

The Sharp family nexus also provided practical and emotional support. When Granville resigned his post at the Ordnance Office in July 1775, in protest at the government’s prosecution of the American Revolutionary War, he could rely almost unquestioningly on his brothers’ financial aid. For, as James put it in a letter to Granville endorsing his decision: ‘If we have the needful amongst us, it matters not to whom it belongs.’ The two unmarried sisters, Judith and Frances, enjoyed privileged positions in the households of their brothers throughout their adult lives. Judith in fact turned down two advantageous offers of marriage, apparently concluding that female autonomy would be better served in the household of a compliant brother than in the untested waters of matrimony.

Family solidarity came into its own at moments of crisis: when James fell dangerously ill with a ‘paralytic disorder’ in July 1783, nine members of the extended family – including William, his wife Catharine, five-year old daughter Mary and her governess Miss Wrather accompanied him to Weymouth in search of a seaside cure.

The Sharps were so closely entwined that it is sometimes difficult to untangle the achievement of one sibling from the contribution of others. Granville’s journey on the road to the emancipation of slaves began at William’s surgery for the poor in Mincing Lane and it was James’ membership of the Common Council of London that gave an outlet to Granville’s political idealism. At least four members of the family contributed to John’s charitable enterprises at Bamburgh, which in their turn provided the model for Elizabeth’s philanthropy at Wicken Park. This finely wrought network of mutual aid was underpinned by the Sharps’ adherence to a common value system. Radical and freethinking, the siblings negotiated with deft skill the competing demands of an increasingly elevated social position with their commitment to political and social reform.

Johan Zoffany’s luminous depiction of the siblings is the defining image of this most harmonious of families. Two hundred and fifty years later, the story of the Sharps remains a testament to the power of the family to enrich and sustain the individuals within it.

Hester Grant is the author of The Good Sharps: The Brothers and Sisters Who Remade Their World  (Chatto & Windus, 2020).