W. Bruce Lincoln describes how Nicholas exercised a more personal control in state affairs than any other ruler since Peter the Great.

‘Mount your horses, gentlemen, a republic has been declared in France,’ were the words popularly attributed to the Russian Emperor Nicholas I in 1848 when he learned that the government of Louis Philippe had fallen.

To be sure, such an account of the Emperor’s reaction to the revolution has little basis in fact, for he was too astute a statesman to consider putting down a revolution so far from his borders, and he was not at all unhappy to see the King of the French, whom he had never considered to be a legitimate sovereign, removed from power.

Yet the popular tale of the Emperor exhorting his Imperial Guards officers to ride with him to Paris is interesting and instructive precisely because it is apocryphal. For it illustrates a fundamental misconception about the nature of absolute monarchy as it existed in Russia at the time. 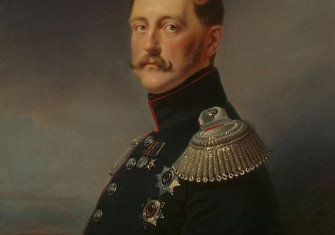 Death of Tsar Nicholas I of Russia

The Emperor Nicholas I in England