It was not until a year after the armistice that the remaining American divisions were withdrawn from Korea, on August 18th, 1954. 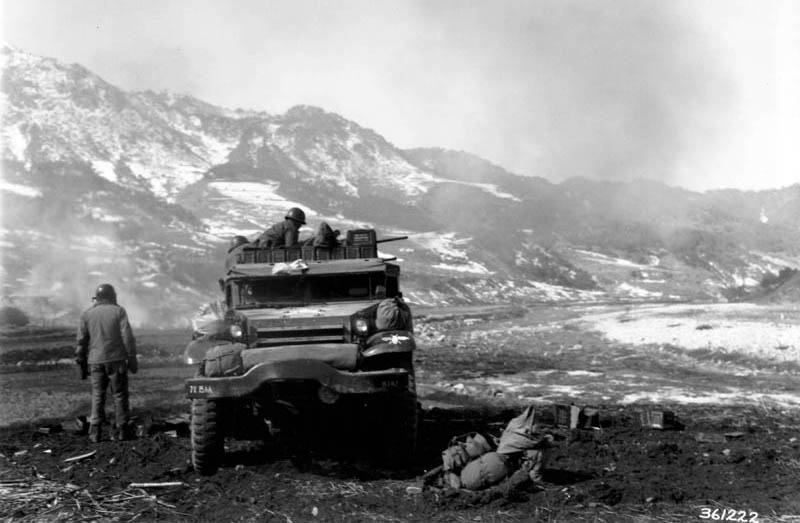 The Korean War took a long time to sort out. It began in June 1950 and after a military stalemate truce talks started in July 1951, but dragged on and on while fighting continued, until in 1953 the newly elected President Eisenhower let the Chinese Communists know privately that he would use nuclear weapons and invade China itself if matters were not resolved. An armistice was signed at last in July 1953, though South Korea refused to sign. Operation Big Switch to repatriate prisoners-of-war swung into action on August 5th after the South Koreans had released thousands of North Korean prisoners into the South Korean countryside and given them clothing and shelter. Communist prisoners being loaded onto trucks for return north, on the other hand, followed their orders and ostentatiously threw away cigarettes and chocolate they had been given and tore off their American-issued jackets and boots, which they threw at the watching pressmen and photographers. The returning British prisoners included the heroic Colonel Carne VC of the Gloucestershire Regiment and his men. All he would say about his nineteen months in solitary confinement was, ‘The food was rotten and I was damned bored.’

Intense mutual suspicion kept both sides fully armed, but at the end of 1953 President Eisenhower said that American forces in Korea would be reduced ‘as circumstances warrant’. Two US divisions went home early in 1954, but it was not until a year after the armistice, in August, that the US Defence Department announced the withdrawal of four of the remaining six American divisions. Beijing announced a reduction of seven divisions of Chinese troops on September 5th. Reductions in British, Canadian, Australian and New Zealand forces were announced in the same month and battalions of troops from the Netherlands, Belgium, Colombia and the Philippines left in September and October. The grim task of exchanging the bodies of war dead had begun on September 1st. The total butcher’s bill for the war has been reckoned at above four million, with far the heaviest toll taken of the Koreans and the Chinese. Many of the North Korean and South Korean casualties were civilians and in South Korea the war left 600,000 widows and a million orphans behind it. The conflict fathered a widespread economic boom, but it has been described as a war that both sides claimed to have won and both felt they had lost.