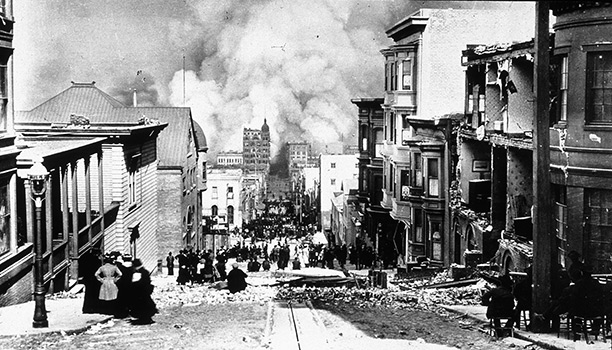 San Francisco in 1906 was the premier city of the American West, the principal port on the Pacific coast of the United States and a major financial centre. It had known earthquakes and fires before, but nothing approaching what happened in 1906.

On the night of April 17th, Enrico Caruso sang in Carmen at the Opera and stayed at the Palace Hotel. San Francisco high society turned out in force and the audience included the actor John Barrymore. Restaurants, clubs and brothels did their usual roaring trade and by about 2 am the city had mostly settled down for the night.

Around 5am, as the sky began to get light, the gas street lighting switched off, the cable cars began to move and so did a few early risers. At or soon after 5.10, as Simon Winchester put it, ‘the earth very briefly shrugged’. There was a terrifying rumbling sound, which one observer described as like the noise of an enormous train, and the surface of the ground seemed to rise up and move in a succession of waves into the city from the Pacific. A policeman on duty in the produce market saw it coming up Washington Street. ‘The whole street was undulating. It was as if the waves of the ocean were coming towards me, billowing as they came.’ Buildings lurched to and fro, roofs and chimneys caved in, people were thrown out of their beds, windows smashed, the cablecar tracks twisted and cracks opened in the pavements. The Palace Hotel seemed to be dancing a jig. Journalists in the office of the Examiner newspaper were sent staggering about until they fell flat on their faces, where they seemed to be glued to the floor. The City Hall shook so violently that those inside had to hold on to doors to stay upright, while the furniture jumped about and plaster fell off the ceilings.

Within a few seconds fires began raging, driven on by the wind from the Pacific and reducing hundreds of damaged buildings to ashes. The business and industrial districts were virtually wiped out and the fashionable Nob Hill area was threatened by the flames. Around 5.30 James Hopper, a reporter for the San Francisco Call, went out into the city. ‘The streets were full of people, half-clad, dishevelled, but silent, absolutely silent, as if suddenly they had become speechless idiots.’

Thousands of people took to living in the city parks and thousands more fled in ferries and on trains, while the authorities took an admirably effective grip on the situation, led by Brigadier-General Frederick Funston of the US Army and the city’s mayor, Eugene Schmitz. A committee of fifty citizens appointed to assist them had to hold its first meeting in the open air because the buildings were unsafe. Funston’s troops had orders to shoot looters dead on sight. All sale of liquor was banned and all bars and saloons closed. Gas and electricity services were suspended, the city was left in darkness at night and a curfew was imposed. Fire-fighting was desperately difficult because the water mains had all been destroyed, but the army’s dynamite was used extensively and the fires burned out after three days, at which point it started to rain. The number of lives lost has been estimated at 3,000, and 225,000 people were left homeless. According to official records, a total of 28,188 buildings were destroyed in an area of about four square miles. The city soon recovered its spirit and a far more beautiful San Francisco rose to replace the old.