A rebellion erupted on the Russian battleship Potemkin on 14 June 1905. 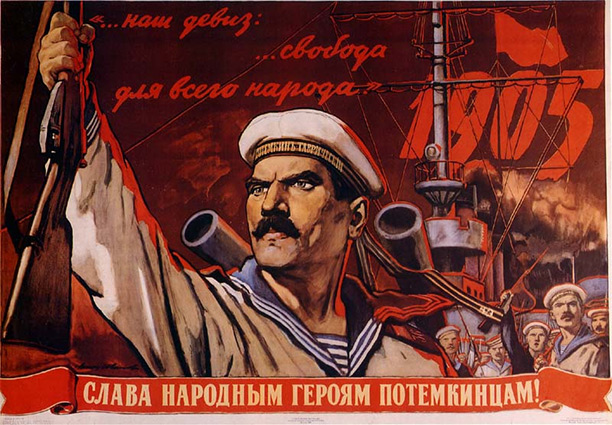 The Russian navy in the year of the abortive revolution of 1905 still preserved the harsh conditions and brutal punishments of an earlier age. The Potemkin was a new battleship of the Black Sea fleet, commissioned in 1903, with a crew of 800. It was not a happy ship and some of the crew harboured revolutionary sympathies, in particular a forceful young non-commissioned officer named Matyushenko, who took a leading part in what followed. At sea on June 14th (June 27th, Old Style), the cooks complained that the meat for the men’s borscht was riddled with maggots. The ship’s doctor took a look and decided that the maggots were only flies’ eggs and the meat was perfectly fit to eat. Later a deputation went and complained to the captain and his executive officer, Commander Giliarovsky, about worms in their soup. Their spokesman was a seaman named Valenchuk, who expressed himself in such plain language that  Giliarovsky flew into a violent rage, pulled out a gun and shot him dead on the spot. The others seized Giliarovsky and threw him overboard. As he floundered in the water he was shot and killed.

Others of the crew joined in. The captain, the doctor and several other officers were killed and the rest of the officers were shut away in one of the cabins. The Potemkin hoisted the red flag and a ‘people’s committee’ was chosen to take charge. The chairman was Matyushenko.

The ship made for the port of Odessa, where disturbances and strikes had already been going on for two weeks, with clashes between demonstrators, Cossacks and police. The trains and trams had stopped running and most of the shops had closed. People began to gather at the waterfront after the Potemkin arrived in the harbour at 6 am on the 15th. Valenchuk’s body was brought ashore by an honour guard and placed on a bier close to a flight of steps which twenty years afterwards would play an immortal and immensely magnified role in the famous ‘Odessa steps’ sequence of Sergei Eisenstein’s film. A paper pinned on the corpse’s chest said, ‘This is the body of Valenchuk, killed by the commander for having told the truth. Retribution has been meted out to the commander.’

Citizens brought food for the seamen and flowers for the bier. As the day wore on and word spread, the crowd steadily swelled, listening to inflammatory speeches, joining in revolutionary songs and some of them sinking considerable quantities of vodka. People began looting the warehouses and setting fires until much of the harbour area was in flames.

Meanwhile, martial law had been declared and the governor had been instructed by telegram from Tsar Nicholas II to take firm action. Troops were sent to the harbour in the evening, took up commanding positions and at about midnight opened fire on the packed crowd, which had no escape route. Some people were shot and some jumped or fell into the water and drowned. The sailors on the Potemkin did nothing. The casualties were put at 2,000 dead and 3,000 seriously wounded.

Calm was quickly restored and Valenchuk was allowed a decent burial by the authorities, but the sailors’ demand for an amnesty was turned down and on June 18th the Potemkin set out to sea. The crew were hoping to provoke mutinies in other ships of the Black Sea fleet, but there were only a few minor disturbances, easily put down. The mutineers sailed west to the Romanian port of Constanza for badly needed fresh water and coal, but the Romanians demanded that they surrender the ship. They refused and sailed back eastwards to Feodosia in the Crimea, where a party landed to seize supplies, but was driven off. The Potemkin sailed disconsolately back to Constanza again, and on June 25th surrendered to the Romanian authorities, who handed the ship over to Russian naval officers.

The incident had petered out, though it caused the regime serious alarm about the extent of revolutionary feeling in the armed forces. Its most lasting legacy was Eisenstein’s film, The Battleship Potemkin, (1925) and a riveting essay in propaganda rather than history.