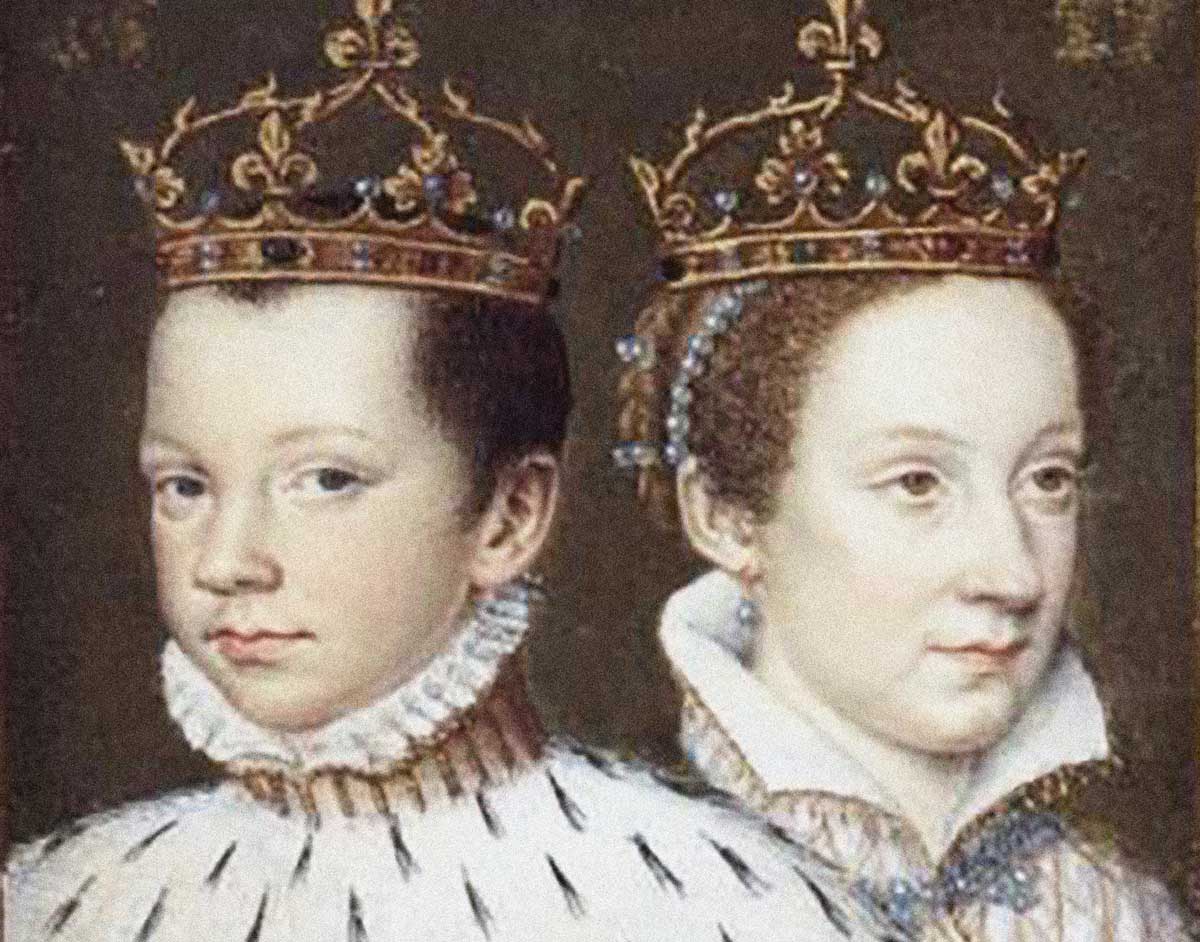 Mary became Queen of Scots when she was less than a week old, on the death of her father, James in December 1542. Crowned at nine months, she was in the charge first of the Earl of Arran and then of her redoubtable mother, Mary of Guise, who was from one of the most powerful aristocratic families in France. A Roman Catholic and regent from 1554, she had to contend with both the rising tide of Protestantism in Scotland and the machinations of the English who had tried to force a marriage between the baby queen and Edward Tudor, the young heir to the English throne.

It was not a prospect Mary of Guise could tolerate and in 1548 the five-year-old Mary was sent to her grandmother Antoinette of Guise in France, where her Scottish entourage was considered appallingly barbarous and swiftly got rid of, and she was brought up as a Catholic Frenchwoman. French became her first language, she always called herself Marie Stuart and she loved dancing and hunting. She grew up delightfully charming, graceful and attractive, the French fell in love with her and Henry II of France resolved to marry her to his son and heir, the sickly dauphin Francis. A marriage treaty was signed with the Scots, which provided that Scotland and France should eventually be united under Mary and Francis as one kingdom. There were also secret agreements, which the youthful and inexperienced Mary signed, that would have made Scotland a mere adjunct of France.

Mary was fifteen and Francis fourteen when they were married with spectacular pageantry and magnificence in the cathedral of Notre Dame, Paris, by the Cardinal Archbishop of Rouen, in the presence of Henry II, Queen Catherine de’ Medici, the princes and princesses of the blood and a glittering throng of cardinals and nobles. The Duke of Guise was master of ceremonies. Mary in a white dress with a long train borne by two young girls, a diamond necklace and a golden coronet studded with jewels, was described by the courtier Pierre de Brantôme as ‘a hundred times more beautiful than a goddess of heaven … her person alone was worth a kingdom.’ The wedding was followed by a procession past excited crowds in the Paris streets to a grand banquet in the Palais de Justice with dancing far into the night.

Mary became Queen of France when Henry II died the following year, but Francis died prematurely in 1560. Whether the marriage was ever consummated is uncertain. Mary’s mother also died in 1560 and it suited the French to send her back to Scotland and claim that she was the rightful queen of England as well. She would eventually meet political and romantic disaster in Scotland, enduring years of imprisonment in England where, too dangerous a threat to Elizabeth’s throne, she was executed in 1587, at the age of forty-six.