The traumatic but ultimately victorious march of Mao Zedong and the Chinese Communists ended on 22 October 1935. 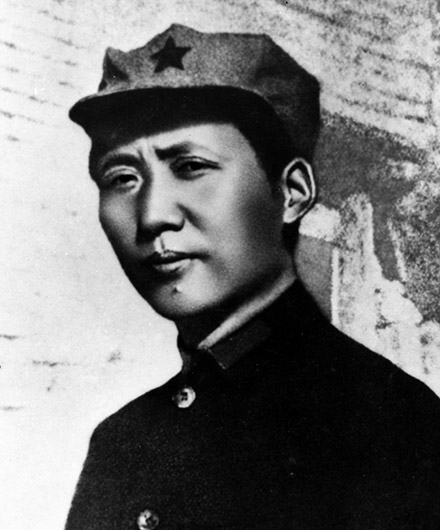 One of history’s great journeys began in October 1934 and ended a year later after covering a distance variously estimated at between 3,000 and 8,000 miles across China. Figures for the numbers involved vary hugely, but fewer than one in ten of those who started the trek apparently reached the end of it. The Long March made the survival of the imperilled Chinese Communist Party possible, gave Mao Zedong a secure grasp on its leadership and ultimately led to the creation of the People’s Republic of China. As a remarkable feat of determination and endurance it became a bulwark of Chinese pride and patriotism, skilfully exploited as such by Mao and his circle. Recently, however, the Maoist version of events has come under fierce attack.

The Chinese Communist Party was founded in 1921 and ten years later set up a Chinese Soviet Republic in the Jiangxi province of southern China, some way north of Canton. The Communists fell out with the Nationalist Party, the Guomindang, which established a national government under General Chiang Kai-shek. The Guomindang army made repeated attacks on the Communists and blockaded them so effectively that by the middle of 1934 their position was becoming impossible. They decided to retreat north to find a base where they would be safe. To go straight north would have taken them into Guomindang territory, so they took a circuitous route, starting westwards and then turning north.

According to one estimate, the First Red Army, which set out on October 16th, 1934 with most of its important leaders, numbered about 60,000 fighting men with another 30,000 auxiliaries, party officials and porters. It would be followed by three more armies. Close to 30,000 people, mainly wounded and women, were left behind to the vengeance of the Nationalists.

Mao, who was 40 at this point, was not yet the accepted Communist leader. The military commander was Zhu De, an aristocratic former imperial army officer in his late forties, who had joined the Communists in the 1920s and trained the Red Army units in the south. His Guomindang counterpart was a similarly aristocratic Prussian, General von Seeckt. It was Zhu De who organised the escape from Jiangxi and frustrated the attacks of the pursuing Guomindang forces. The army marched through territory controlled by minor local warlords, who let it through or were brushed aside, and made its way through mountains, over rivers and across uncharted country in the high, cold swamps along the border of Tibet to reach the small town of Yan’an in the province of Shanxi among the remote mountains of the north.

It was during the march that Mao manoeuvered himself into position as the dominant Communist leader. At a key meeting in January 1935 he exploited rivalries and discontents in the party politburo to wrongfoot his opponents and take control. There were some fierce battles along the route, but desertion, starvation and disease rather than military action accounted for most of those who failed to reach Yan’an. Mao said the distance covered was 8,000 miles, but the figure now most often cited is 6,000 miles, meaning that the marchers covered an average of about 16 miles a day. Some authorities think it was only 3,000 miles.

According to Mao: The Unknown Story, the bestselling 2005 book by Jung Chang and Jon Halliday, the march was not remotely as heroic as Maoist legend made out. Details of skirmishes and occasional battles were exaggerated for effect and some of the battles were simply made up. The leaders, including Mao, did very little marching, incidentally; they were carried along in litters.

Even more surprising was the book’s assertion that ‘the Long March was to a large extent steered by Chiang Kai-shek.’ It suited Chiang for the Communists to move to a remote region in the north where he could box them in and their departure might allow him to take a firm hold on the Chinese south-west. He also needed a good relationship with the Soviet Union because China was being threatened by Japan and his son was held hostage in Moscow. His troops were really escorting the Reds while pretending to attack them and his airforce and artillery took care not to bomb or shell them effectively. The difficulties the marchers encountered were largely the result of incompetent decisions by their own leaders, especially Mao.

The book received rave reviews at first, but considered judgments by academic experts on China were more critical. That the story of the Long March had been tweaked and burnished to reflect the maximum credit on Chinese Communism in general and Mao in particular was generally accepted, but beyond that the revisionist account given by Jung Chang and Halliday was widely rejected as more fantasy than fact.