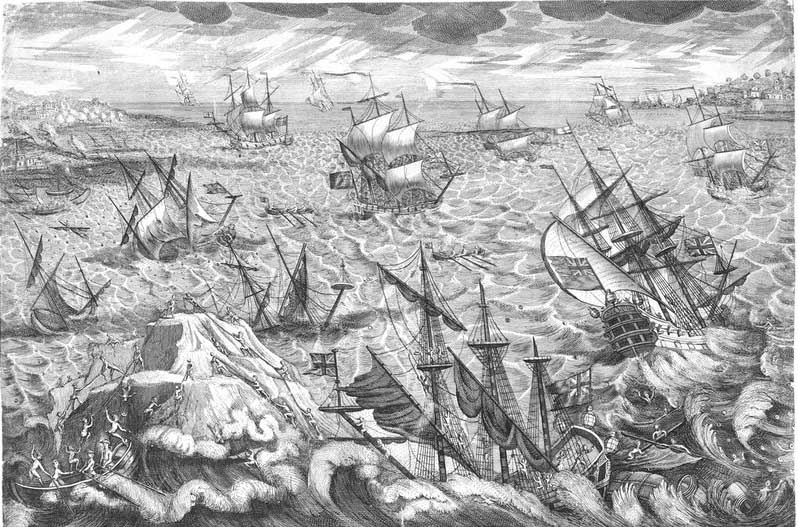 The week-long hurricane that struck the south of England and the English Channel at the end of the month was beyond anything in living memory. John Evelyn described it in his diary as ‘not to be paralleled with anything happening in our age or in any history almost ... every moment like Job’s messengers brings the sad tidings of this universal judgement.’ Winds tore across the country, sending the roofs of houses flying, levelling barns and knocking flat thousands of trees, which lay prostrate in rows like regiments fallen in battle. It was reported that 4,000 oaks perished in the New Forest and an attempt to count the toll of trees in Kent gave up at 17,000. Evelyn himself lost more than 2,000 on his Surrey estate. The chimneys of Wells Palace fell in, killing the bishop and his wife in their bed.

At sea the Eddystone Lighthouse with its 120ft tower was swept away and the six people in it were killed. Ships overtaken by the gale were wrecked and sunk and the loss of life was estimated at 8,000 men. Off the Kent coast shipwrecked seamen managed to find a foothold on the Goodwin Sands, but they knew the rising sea would drown them if they were not taken off. A man named Thomas Powell of Deal organised the rescue of some 200 of them, but it was said that many citizens of Deal were too busy looting the wrecked ships to help the sailors.

The storm struck on a Wednesday evening and in London Daniel Defoe had a narrow escape in the street when part of a nearby house fell down. On the Friday, the 26th, the wind began to blow even harder and when he checked his barometer, he found the mercury sunk lower than he had ever seen it. After midnight the gale swelled to such force that it was almost impossible to sleep. The noise of the chimneys of neighbouring houses coming down made the family fear that their own solid brick house might collapse on their heads. But when they opened the door to escape into the garden, they saw tiles hurtling through the air, some travelling thirty or forty yards and then driven eight inches deep into the ground. The Defoes decided to stay inside and trust in God’s providence.

The storm did not abate until December 2nd, and the next day Defoe went to the Pool of London, where he saw some 700 ships all piled up into heaps together. He advertised in the London Gazette for witnesses to send in their accounts of the gale and published The Storm the following year.

Evelyn and Defoe, like their contemporaries, believed that the storm was a visitation of the anger of God. After it had blown out, Queen Anne’s government announced that the calamity ‘loudly calls for the deepest and most solemn humil-iation of our people’ and proclaimed a national day of fasting on December 16th in recognition of the ‘crying sins of this nation’. The archbishops and bishops were to write special prayers for the occasion in the hope of averting further manifestations of the divine wrath.