The Execution of Admiral Byng

During the Seven Years War, Admiral Byng was charged with 'failing to do his utmost'. He was executed on board the Monarch on March 14th, 1757. 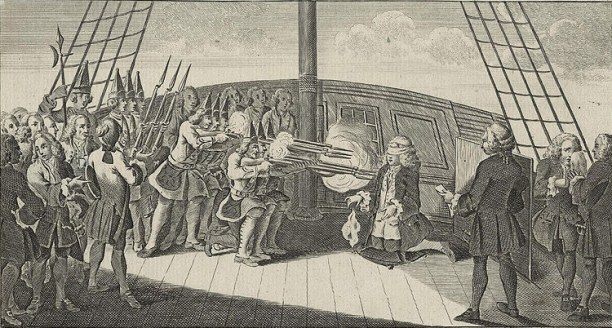 A quiet, shy man, the unfortunate John Byng was no coward – he faced his death with cool courage – but he seems to have been too cautious, passive and defeatist for command in the British navy. He went to sea at 13 and rose up the ladder to captain at 23 and rear admiral at 40.

Aged 50 in 1756 when the Seven Years’ War broke out, Byng, now a full admiral, sailed with ten ships of the line to Gibraltar. His orders were to prevent the French in Toulon from capturing the British stronghold of Fort St Philip on the island of Minorca, and to this end he was to carry a detachment of 700 men from the Gibraltar garrison to Port Mahon.

When Byng reached Gibraltar, however, he discovered that the French had already landed a sizeable force on Minorca and were besieging the fort. He and his council of war decided against landing more troops and he wrote to the Admiralty to explain that carrying out his orders would not stop the French and would be a needless waste of manpower.

The letter, which arrived at the end of May, aroused consternation and fury in London. George II said flatly: ‘This man will not fight!’ Then came news of an inconclusive encounter in June between the British fleet under Byng and the French, from which the French had sailed away scot free, and late in June Fort St Philip surrendered. Byng was summoned home and put under arrest on arrival. Mobs went about chanting ‘Swing, swing Admiral Byng’ and the court martial, which convened at the end of December, was reported in detail in all the newspapers. Byng was charged with ‘failing to do his utmost’. He defended himself, but the court found against him and with the utmost reluctance sentenced him to death.

The government ignored the court’s unanimous recommendation to mercy and George II declined to use his prerogative to spare Byng. In a howling gale in Portsmouth harbour that March day a heavy coffin was hoisted on board the Monarch at 7am. It was already inscribed, ‘The Hon. John Byng, Esqr. Died March 14th 1757.’ The admiral himself followed and by 11am boats were bringing officers from every warship in the harbour and numerous other vessels were heaving up and down filled with eager spectators.

At noon Byng came out on deck in a light grey coat, white breeches and a big white wig. He had been persuaded with difficulty to be blindfolded, on the grounds that it would not be fair to the firing party to have to see his face. He was escorted out onto the quarter deck, ‘with a stately pace and a composed countenance’ according to the Evening Post, to see nine marines in their scarlet uniforms lined up in three rows. The rear row were in reserve. In front of him was a cushion and a heap of sawdust, sodden from the rain.

He knelt on the cushion, tied the blindfold round his head and held up a neatly folded white handkerchief in his right hand. After a few agonizing moments he dropped the handkerchief, the six marines fired and the admiral fell gently on his side. He was fifty-two.

The rights and wrongs of the matter have been disputed ever since, but Byng was not a political victim and Voltaire’s comment in Candide, that ‘in this country, it is good to kill an admiral from time to time, in order to encourage the others’ probably hit the nail on the head.