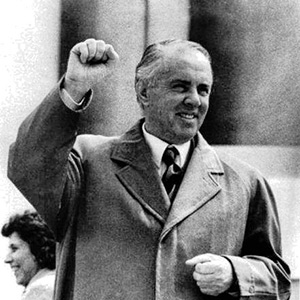 The man who held Albania in an iron grip for 40 years was a devout Marxist-Leninist, a fervent admirer of Stalin and a committed moderniser. When he was born to a Muslim family in 1908, Albania was still an obscure province of the Ottoman Empire. Enver Hoxha (pronounced to rhyme with ‘lodger’) came from a comfortably off family, was sent to a French school in Albania and in 1930 won a state scholarship to the University of Montpellier in France. R.J. Crampton, the historian of the postwar Balkans, describes him as ‘the only intellectual among the Communist leaders of Eastern Europe’, with the possible exception of Matyas Rakosi of Hungary. Hoxha joined the French Communist Party and lost his scholarship because of his involvement in leftwing politics. He returned home in 1936 to teach at his old school.

Albania at this time was a backward, poverty-stricken, largely illiterate country, theoretically ruled by the self-appointed King Zog, with almost no industry, no railways, no universities and no town with a population of more than 20,000 people. The peasantry were under the control of their local chiefs, as they had been for centuries, and Zog’s regime was heavily dependent on Mussolini’s Italy. In 1939 Mussolini annexed Albania and sent Zog packing. Hoxha now lost his job at the school because he refused to join the newly formed Albanian Fascist Party. He opened a tobacconist’s shop in the capital, Tirana, which became the headquarters of the Communist group that he began to build up. In 1941 he founded the Albanian Communist Party.

When German troops occupied Albania in 1943, various small resistance groups, ranging from Communists to royalists, fought them and each other. Hostile Albanian groups sometimes collaborated with the Germans against Hoxha and his people, whose superior efficiency and ruthlessness enabled them to dominate the Albanian National Liberation Army. Late in the following year, with the Germans pulling out of the country, an anti-Fascist congress declared Hoxha president of a new democratic Albania and he made a victorious entry into Tirana after taking the opportunity to have 400 of his opponents in the city murdered. His new government was recognised by the United States, the Soviet Union and Britain in 1945.

As the People’s Republic of Albania’s prime minister, foreign minister, minister of defence and commander-in-chief of the army, Hoxha began an effective modernisation policy with the same ruthlessness he had demonstrated during the war. Land was confiscated and organised into collective farms. The prewar ruling class was destroyed and the banks and other businesses were nationalised. Modern industries were developed, the traditional subordination of women was ended (officially at least), education was dramatically improved and an Albanian language was constructed out of the traditional dialects. Religion was outlawed and all churches, mosques and religious institutions were closed down, while the state took a firm grasp on the country’s cultural and intellectual activities.

Opponents, including political rivals, protesting Christians and Muslims, landowners and recalcitrant peasants, were tried for crimes against the people and sent to prison camps or executed. Some were simply murdered, including Koci Xoxe, the head of the secret police, who by 1948 was in altogether too strong a position for Hoxha’s liking. One report had him strangled by the man who succeeded him, Mehmet Shehu.

Hoxha had suffered from diabetes for many years and by the 1980s he knew his days were numbered. He wanted a young colleague named Ramiz Alia to succeed him and cleared the way for him by eliminating Mehmet Shehu, his righthand man since 1948, who was now prime minister and minister of the interior. In 1981 it was announced that he had suffered a nervous breakdown and committed suicide. The official story did not stand up and there were whispers in Tirana that Shehu had been shot and killed at a meeting of the politburo, perhaps by Hoxha himself. It was presently given out, highly improbably, that he had been spying for the Americans, the British and the Vatican. His wife was sentenced to 20 years in a labour camp (where she died in 1988) and the secret police were purged of his supporters. In 2001 Shehu’s corpse was found near a river in the countryside outside Tirana.

Diabetes finally carried Hoxha off in Tirana in 1985 at the age of 76. He had transformed Albania from a primeval relic of the Ottoman Empire into a modern industrialised country under the strictest government control in Europe. Ramiz Alia duly succeeded him.