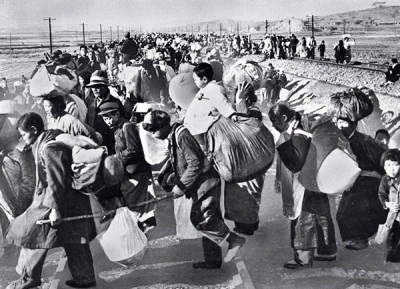 After a ninety-minute artillery barrage starting at 4 o’clock on Sunday morning, North Korean tanks and infantry crossed the Thirty-Eighth Parallel and drove south through gaps in the border hills in intermittent driving rain. Most of the South Korean army units in the area had stood down for the weekend and many of the officers and men were relaxing in Seoul, the South Korean capital. The invasion was almost certainly launched with Soviet and Chinese Communist approval in the expectation of a quick walk-over, after Dean Acheson, the American Secretary of State, had publicly declared in January that the United States would not guarantee any area of the mainland of Asia against military assault.

Spearheaded by heavy tanks, the North Koreans took the town of Kaesong and crossed the Imjin River. Some South Korean soldiers resisted with suicidal courage, tying explosives to their bodies and throwing themselves onto the enemy tanks as human bombs, but the North Korean superiority in numbers and equipment was overwhelming. The American ambassador in Seoul cabled Washington and the United Nations commission in Korea reported to the Secretary General that the invasion ‘is assuming the character of a full-scale war’. The Security Council met that Sunday afternoon – the Soviet delegate stayed away – and adopted an American resolution condemning North Korea’s attack and demanding an immediate cease-fire and withdrawal across the border. Next day, the 26th, President Truman announced that the United States government would ‘vigorously support’ the Security Council.

On Tuesday the 27th, American air and sea forces were ordered to South Korea’s assistance and General Douglas MacArthur, the seventy-year-old Supreme Allied Commander in Japan, was put in command of all American units in the operations. The Security Council met that evening, again without the Soviet representative, and adopted an American resolution recommending the members of the United Nations to ‘furnish such assistance to the Republic of Korea as may be necessary to repel the armed attack and to restore international peace and security in the area.’ The North Koreans were now within a few miles of Seoul and the city fell on the 28th.

General MacArthur flew to Korea on the 29th, the Thursday, with a retinue of pressmen, to see the situation for himself. His aircraft, a Constellation, was ‘bounced’ by an enemy warplane, which was driven off by the escorting Mustangs while the general watched, entirely unperturbed, which was more than could be said of the journalists. After landing, he was driven around the rear areas of the battlefield in a jeep and saw huge numbers of refugees flooding south, South Korean soldiers among them. US naval units were meanwhile bombarding Inchon, the port of Seoul, which the North Koreans had captured. President Truman told a press conference that the United States was not at war, but was taking ‘police action against a bunch of bandits’.

That night the North Koreans broke through the South Korean defence line on the Han River, ferrying tanks across under cover of darkness. In Washington next day the President announced that he had authorised the US Air Force to act against targets in North Korea, a naval blockade of the whole Korean coast and the employment of American ground units in Korea. Meanwhile armed support was pledged by the British government and those of the leading Commonwealth countries.

The war had begun in earnest and after the first week over half the South Korean army had disappeared. The United States would send well over 5 million men to the Korean theatre of war before the conflict ended three years later, but the war would involve servicemen from an extraordinary gallimaufry of other nations – the United Kingdom, Canada, Australia and New Zealand, South Africa, India, France, the Netherlands, Belgium and Luxemburg, Colombia, Greece, Ethiopia, the Philippines, Thailand and Turkey – and would cost United Nations and South Korean forces more than 200,000 casualties before the independence of South Korea was restored.