Julius Caesar first landed in Britain on August 26th, 55 BC, but it was almost another hundred years before the Romans actually conquered Britain in AD 43. 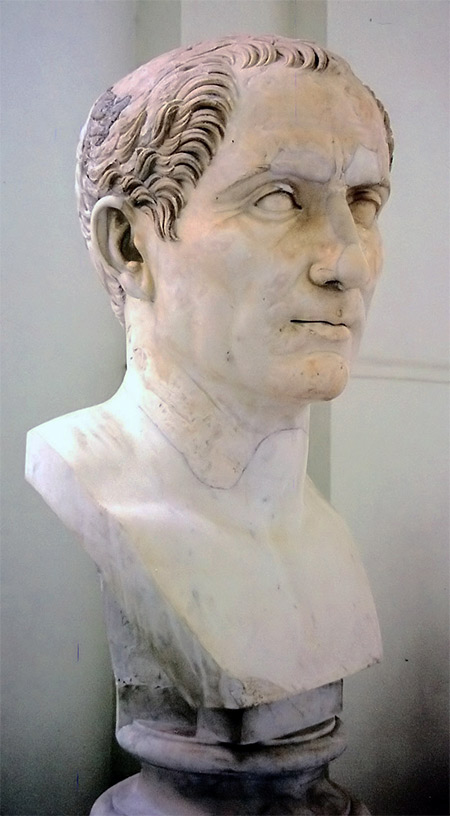 Having subdued Gaul, or so it seemed at the time, Julius Caesar launched an expedition to Britain. It was late in the campaigning season and it is doubtful if he was bent on conquest, more likely a reconnaissance in strength. He would certainly have hoped to increase his prestige at home and he might have wanted to postpone a recall to Rome, where his enemies could get at him. He was probably encouraged by some British chiefs, hoping to use the Romans as allies against rival tribes. Whatever Caesar’s intentions, he was defeated by the British weather.

A Gaulish chieftain named Commius was sent across the Channel to enlist support for the Romans among the British tribes, while a trusted officer took a fast galley to reconnoitre the coast. Caesar assembled eighty ships at Boulogne to carry two legions, the Seventh and the Tenth, plus irregulars, altogether some 12,000 men. The cavalry and their horses were to sail separately from Ambleteuse, a few miles north. After waiting for a wind the Roman ships left Boulogne in the early hours of August 26th and came in sight of the white cliffs of Dover around 9am. The cliffs were bristling with menacing British warriors, horsemen and war chariots. It was obviously no place to land, but Caesar waited for hours offshore for the cavalry, which had got penned in Ambleteuse by tide and wind. In the afternoon the Roman fleet sailed north-east without them to pass the South Foreland and come in sight of the long stretch of flat shore to the north. The Britons moved along on land to keep pace.

The Roman ships drew in and anchored offshore, probably about where Deal is now, and the legionaries were faced with wading to land, burdened with weapons and gear, while the Britons threw javelins at them and galloped menacingly to and fro on the beach. It was not an agreeable prospect and the soldiers hung back until the eagle-bearer of the Tenth jumped into the sea and shouted to his comrades to follow him and defend the standard. This they did and more and more of the Romans struggled through the waves to the beach. After savage fighting, the legionaries managed to form up, charge the Britons and drive them in flight. With no cavalry this could not be followed up and the Romans made camp.

The Britons sent emissaries to Caesar to sue for peace, along with Commius with his tail between his legs. Caesar took hostages from them and after four days, on the 30th, the cavalry transports at last appeared, but were blown away by a sudden fierce storm and forced back to Gaul. The gale coincided with an exceptionally high tide and many of Caesar’s ships dragged their anchors and were wrecked on the beach. The Britons took note and started to muster their forces again. The Romans began repairing the ships, but now they were short of food. Parties ventured into the countryside to reap corn and gather supplies, but legionaries of the Seventh were ambushed by British chariots and horsemen. Fortunately for the Romans, the attack raised such a cloud of dust that Caesar saw it from the camp and hurried up with reinforcements. After several days of incessant rain Caesar managed to bring the British to a pitched battle, which was what Roman commanders always wanted against a barbarian and comparatively undisciplined enemy. The British were defeated with heavy casualties, but again could not be effectively pursued. Caesar had had enough. He embarked his men on the ships and sailed back to Gaul.

Caesar tried again the following year, launching a stronger and better prepared force of five legions on a second expedition, which carried him across the Thames at Brentford, but again the weather was abominable and gales played havoc with his ships and supplies. After concluding a face-saving treaty with the local British king he returned to Gaul once more. It was almost another hundred years before the Romans actually conquered Britain, in AD 43.