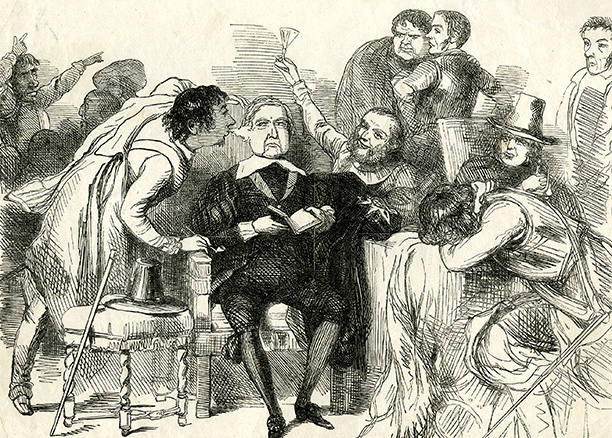 In the Spring of 1846 the Tory Prime Minister Sir Robert Peel was a perplexed and exasperated man. His government’s proposed legislation to phase out the Corn Laws, which protected British agriculture by imposing tariffs on imported grain, was being resolutely and vociferously opposed by increasing numbers of his own backbenchers. The terms in which they did so resonate sharply with the same sort of arguments put forward by Eurosceptic Conservative MPs today. Although the terms of the debate are different, the underlying concern with foreign trade is a familiar one.

The pretext for Peel’s decision to reform the Corn Laws was the outbreak of famine in Ireland in 1845 caused by the catastrophic failure of the potato crop. The prime minister had already become a convert to the idea of free trade on economic and social grounds and the corn tariffs were the main outstanding symbol of the protectionism that he thought was holding back British commerce. For many Tory backbenchers from the shires, however, the Corn Laws offered a bulwark for their supporters’ economic interests. If they were removed, not just agriculture but other conservative institutions, including the aristocracy and the Church of England, would eventually be threatened by foreign pressure.

Peel could not understand their arguments. A progressive agriculturalist himself, he had become convinced intellectually of the case for change and was frankly contemptuous of those on the other side of the debate. ‘How can those who spend their time in hunting and shooting and eating and drinking know what were the motives of those who ... have access to the best information?’, he wrote in December 1845 to his wife Julia, at home on the family’s Staffordshire estate.

What he had not calculated on was the degree of organisation being mobilised against reform by the so-called Anti-League, set up in 1843 in opposition to the Anti-Corn Law League of northern manufacturers, which was campaigning for repeal. The Anti-League, organised through county agricultural societies, held its annual meeting each December at the Smithfield livestock show in London, which in 1845 coincided with a political crisis during which it became obvious that Peel would move for repeal of the Corn Laws when Parliament met the following January.

Over Christmas 1845 the Anti-League got to work, holding local meetings of farmers and pressurising MPs to pledge that they would vote against their own government. The gatherings across England were attended by landowners and wealthy aristocratic patrons, though mainly by tenant farmers and those from rural businesses, corn chandlers, millers and land agents: the kind of men who had been given the vote in the 1832 Reform Act. Astutely, the organisers allowed the tenantry to speak up first at meetings, to give confidence to the rest that they could take a political stand. They were told that they were being betrayed by those they had elected. The meetings were assiduously reported by Tory newspapers opposed to repeal, such as the Morning Post, which encouraged opposition.  ‘Even if it ends in defeat,’ said an editorial in the Standard of February 1846, ‘a prolonged parliamentary campaign would consolidate and discipline the true Conservative Party and direct it to its true leaders.’

When Parliament resumed, the Duke of Richmond, patron of the Anti-League and owner of the Goodwood estate in Sussex – who had been aide-de-camp to Wellington at Waterloo – stood up in the Lords and berated his old chief, who was loyally supporting Peel: ‘Whether or not we are to have these modern innovations passed into law, whether we are to be rendered dependent on foreigners for the supply of our population, whether we are to be constantly changing because there happens to be some popular clamour, I will use every parliamentary means of opposition in my power – be it called fractious, I care not.’ Queen Victoria in her journal the following day described it as ‘a most absurdly violent speech’ and Peel dismissed Richmond privately as ‘that great goose’.

But the insurgency grew. In the Commons Peel’s opponents, led by Lord George Bentinck and Benjamin Disraeli, dragged out the debate for weeks and the number of rebels mounted. They saw Peelites, such as the government minister Lord Lincoln, defeated in by-elections and the Tory opposition grew bolder in attacking Peel. At the end of the third reading debate in May, Eliot Yorke, MP for Cambridgeshire, stood up at 3am as the House rose and launched one more wrecking amendment: that the Corn Bill should be renamed the Foreign Lands Improvement Bill because it would ‘displace the labour of our hardworking countrymen in order to give employment to foreign serfs’.

Peel got his bill, but was forced to resign the same night. The Tories would be out of power for nearly 30 years and the Anti-League faded into history, its role somehow overlooked by Disraeli when writing up how he and Bentinck defeated Peel.

Stephen Bates' book 1846: An Immense Scheme in View will be published by Head of Zeus in 2014 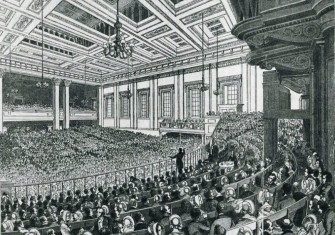 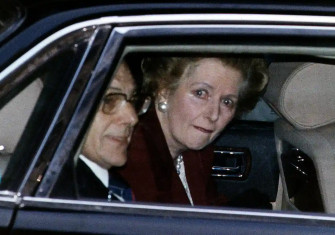