How a German colony laid the groundwork for the alliance between Nazi Germany and Imperial Japan.

Although the German colonial period was relatively short, beginning in the early 1880s and ending with the Treaty of Versailles in 1919, German colonialism shared many characteristics with other European empires: the belief in a ‘civilising mission’, economic interests and, perhaps most importantly, a system of racial superiority. Racial segregation was a feature of all imperial systems, but it was a particular preoccupation of German imperialists, which resulted in, for example, legal prohibitions of intermarriage that were unique to the German empire.

However, questions of racial segregation and hierarchies were much less clear cut than contemporary racial theorists claimed, especially when tested against economic realities. The German colony of Qingdao provides a fascinating glimpse into the interplay of racial hierarchies and questions of culture.

Qingdao, situated on the Shandong Peninsula in eastern China, was part of the German empire between 1898 and 1914. Yet, even by the end of its occupation, the German share in trade through the port city was only eight per cent and the Japanese had significantly more commercial power in the colony. The extensive Japanese presence and influence confronted the German colonisers with a challenge, particularly regarding Qingdao’s racial segregation.

Qingdao was strictly ordered according to racial hierarchies that differentiated between ‘white’ and ‘yellow’ inhabitants of the city. The native Chinese were forbidden from entering the inner part of the city that was exclusively designated for whites, effectively leading to two segregated societies with two different legal codes. The Japanese, however, were able to live in the part of town that was reserved for Westerners. Moreover, Japanese members of the colony were accepted into German social circles. German-Japanese marriages, for instance, were announced in the official gazette of the government and the local press.

However, around 1900, German racial theorists regarded the Japanese and the Chinese as parts of the ‘yellow race’ and the discourse of the ‘yellow peril’, while mostly focusing on China, made no real difference between them. Why, then, were the Japanese treated differently from the Chinese in Qingdao? Politically, at least, since its rapid modernisation during the Meiji Restoration (1868-89) and especially after its victory in the Russo-Japanese war (1904-05), it became disadvantageous to treat the Japanese like the Chinese. As Japan assumed the status of a world power, the racial classification of the Japanese people remained widely debated both in Japan and the West. Yet the modernisation of the country and its refined culture, among other things, led, at least in the Western public consciousness, to the separation of the Japanese from other Asian nations and to the bestowal of the status of ‘honorary whites’, also as a way to maintain a system of Caucasian superiority.

Japanese and Western thinkers used ‘culture’, rather than racial classifications to explain Japan’s rise to a modern state and its political and economic power. German and Japanese contributors to the periodical East Asia, a German-Japanese newspaper published in Germany by Japanese writers, stressed that Japan’s adoption of Western culture, paired with its ancient tradition, elevated the nation over other Asian countries. Various German and Japanese thinkers ascribed to Japan the status of Kulturnation (‘culture nation’) on a par with European countries.

The shift from race to culture as the defining marker of the Japanese people had real political consequences. In German New Guinea, for instance, Japanese citizens were exempt from Germany’s legal system for ‘natives’ because they were seen as members of a ‘civilised’ nation and defined, in 1900, as ‘non-coloured’.

Culture was intrinsically connected to questions of imperialism. The Treaty of Versailles stripped Germany of its colonial possession, reasoning that Germany had not proved itself civilised enough to remain a colonising nation. Article 22 of the League of Nations reinforced the civilising aspect of colonialism when stating that colonial ‘development’ was the task of ‘a sacred trust of civilisation’. Germany’s colonial possessions in Asia, most importantly Qingdao, fell to the Japanese. Thus, Japan, on the side of the victors in the First World War, was clearly deemed such a ‘civilised nation’.

Although German and Japanese relations consequently deteriorated, the two nations continued a largely one-sided cultural exchange, with Japan sponsoring various events in Weimar Germany that perpetuated the discourse of Germany and Japan as culture nations. A shared German-Japanese culture was exemplified through real or imagined similarities between both nations, such as their perceived status as latecomers to the global stage, the emphasis of a shared spirit of chivalry, or a lack of living space for their respective peoples.

The National Socialist fixation on racial purity and hierarchy made it imperative to downplay race questions to ensure successful cross-cultural collaborations with Japan. In 1933/4 a lecture to the German-Japanese Society (DJG) claimed: ‘The worth of a race is determined less by physical characteristics (e.g., colour) as by cultural and ethical achievements.’ In November 1938, two years after the signing of the Anti-Comintern Pact that tightened German-Japanese political relations, Germany and Japan agreed on a culture pact aimed at improving the two nations’ co-operation in the areas of science, art, music, literature, youth engagement, sport and film. Resulting exchanges emphasised a shared culture by employing tropes such as the blood-and-soil-myth and by creating parallels between Germany’s occupation of Europe and Japan’s imperial expansion in Asia.

The effort to forge links between German and Japanese culture continued until almost the end of the Second World War. As late as 1945, the DJG organised events to promote cross-cultural understanding between the two nations, among them an essay contest asking Germans to write about Germany and Japan. The submitted essays employ a variety of myths and a mutual symbolic imaginary that supposedly linked the two nations through a shared identity as ‘soldier people’ (Soldatenvölker), drawing a direct line between Japanese samurai and German medieval knights. Divisive issues of race were pushed to the background in favour of images of shared heroic and moral virtues, a strategy that was also employed in various other productions, such as the 1937 German-Japanese film The Daughter of the Samurai and numerous German novels set in Japan, and that can be traced back to the German empire and Qingdao.

Christin Bohnke has a PhD in cultural history from the University of Toronto with a focus on German-Japanese imperialism. 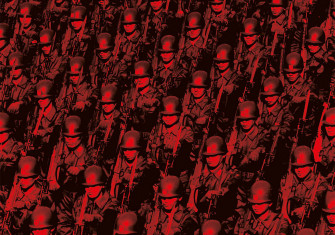 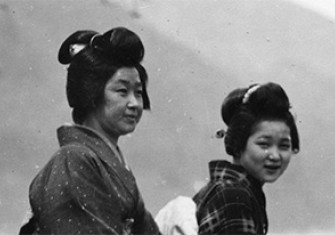