The contribution of the witnesses from the Battle of Algiers to the debate on contemporary history.

Defining contemporary history is fraught with difficulties. One immediate problem is periodisation. Does the contemporary period begin in 1945 at the end of the Second World War, or with the advent of consumer society in the late 1950s? Or, more complicated still, does it begin with those events where there are still people alive to provide eye-witness accounts? This last definition not only stretches the contemporary period somewhat, taking us back to the First World War, it also underlines how contemporary history is a shifting entity, open to constant re-evaluation. Then there are those who would argue that the notion of a separate period called the 'contemporary' is a misnomer, since all history is contemporary. After all who would wish to deny the continuing significance of 'distant' events such as the French Revolution or the Crusades in moulding present day attitudes?

If contemporary history as a period is hard to define, what contemporary history actually is is somewhat easier. For leading practitioners, such as Peter Hennessy through his work on post-1945 Britain, and Brian Brivati with his recent biography of the former Labour leader, Hugh Gaitskell, it means connecting the past and present, putting contemporary events into a proper historical context. Yet the validity of such an approach has been challenged by more traditionalist historians. For the latter what is being proposed is not the stuff of history proper, but rather political speculation. In the meantime historians are too close to the recent past to produce a meaningful overview. Whatever they write will be at best impressionistic, at worst distorted.

The problems with contemporary history are exemplified in the study of the Franco-Algerian war 1954 to 1962, and in particular the pivotal event of that war, the Battle of Algiers. In an effort to end French colonialism, in place since 1830, Algerian nationalists launched a war of liberation in November 1954. Through terrorism the National Liberation Front (FLN) aimed to bring the plight of Algeria to the attention of the world, and in 1956 this campaign spread to the colonial capital, Algiers. Confronted with spiraling violence the French government gave the paratroopers a free hand to restore law and order in January 1957. What followed was a desperate cat-and-mouse game with no holds barred. The FLN deliberately chose attractive young girls to place bombs in crowded cafes, whilst the paratroopers resorted to every conceivable form of torture to obtain information. Summary executions, the raping of women prisoners, the dropping of bodies from helicopters: all of this became a matter of routine in the battle against terrorism.

To those on the intellectual Left horrified at such methods, the army commanders replied that conscience was a costly luxury. For them all that mattered were results, and during 1957 the number of terrorist bombings fell dramatically, from 112 in January to twenty-nine in March. Steadily the net also closed in on the FLN leadership. In February Larbi Ben M'Hidi was captured and killed. In September Yacef Saadi was arrested. Then in October the last remaining FLN leader at large, Ali la Pointe, was cornered within the casbah. When he refused to surrender he was blown up. With his death the FLN command structure was finally destroyed and the terrorist bombings ceased. The Battle of Algiers was now over.

Although in the short term the Battle of Algiers was a victory for the paratroopers, in the long term it was a political defeat. The international outcry against torture led to French isolation within the United Nations, and was a decisive factor in winning Algerian independence. For this reason post-1962 it was difficult for both the French and Algerians to see the Battle of Algiers in a dispassionate manner. Given the climate of recrimination, this makes Gillo Pontecorvo’s 1965 film, The Battle of Algiers, all the more remarkable. An Italian-Algerian co-production, shot in grainy black and white, the film re-enacted the terrorist bombings of crowded cafes, graphically representing the consequences of FLN violence. Equally poignant was the sympathetic portrayal of the para commander, Colonel Mathieu. Humanist, veteran of the Resistance and Indo- China, respectful of his opponents, Mathieu explains to journalists that he and his men are neither sadists, nor monsters, but if France wants to remain in Algeria, then everybody must accept hard-line methods, torture included. Nevertheless, however well balanced Pontecorvo’s representation was, it was still unpalatable to the French authorities. The film was banned in France until 1971.

1971 also saw the publication of General Massu’s book, The Real Battle of Algiers, a vigorous defence of his paratroopers’ actions. Yes, he admitted, they had tortured, but this was a lesser evil when compared to blind terrorism. Through it the paratroopers had procured information that had saved thousands of innocent civilians from FLN bombers. Furthermore he wondered what erstwhile opponents of torture had to say about FLN violence, above all the practice of cutting off the noses, ears and genitalia of any Muslim who dared oppose FLN orders. Massu’s arguments provoked a furious exchange of views within the columns of Le Monde. One of the first to respond was the historian Pierre Vidal-Naquet, whose book, Torture in the Republic, documented how and why torture had become institutionalised in Algeria. The issue, Vidal-Naquet argued, was personal and collective responsibility and in this respect, given the numbers killed, Massu was not as guilty as Eichmann, but more so than Barbie.

In the ensuing years the argument surrounding the Battle of Algiers refused to go away. It resurfaced in 1985 when the French paper, Liberation, accused the leader of the far right National Front, Jean-Marie Le Pen, of torture. A paratrooper officer during the Battle of Algiers, Le Pen’s reaction was revealing. Although flatly refuting the charge, he still justified its usage, thus highlighting the connection between the practices of the war and the resurgence of anti-Algerian racism within France. Then in 1987, as defence lawyer for the SS officer Klaus Barbie, Jacques Verges provocatively used the memory of the Battle of Algiers to turn the tables on the prosecution. Given the atrocities committed by the French army in Algeria, Verges argued, what moral right had France to judge Barbie for crimes against humanity.

These bitter exchanges reveal the difficulty of disentangling the recent past from polemic and recrimination. Moreover, trying to situate the Battle of Algiers as an event in contemporary history underlines another problem, namely that of sources. On the one hand, given the sensitivity of the subject, there is the paucity of traditional archive material. The private papers of many of the key players, such as those of General de Gaulle, are out of bounds to researchers. Access to government sources is highly restricted. Worse still, with the military archives accused of deliberately losing the written orders legitimising torture, the reliability of official sources has been called into question.

Conversely there is the richness of uniquely contemporary documents. Television images, radio, living witnesses, opinion polls: all of these can be used by the historian to produce innovative insights, especially with respect to the everyday experience of the war. Yet, before the mid-1980s honest historical accounts, which drew upon these sources to break away from the mythology of, either the national liberation movement, or the French army, were few and far between. The majority of books published took the form of unrepentant memoirs, in the main by ex-army officers for whom Algerian independence was an act of betrayal.

At the end of the 1980s it was possible to discern a change in attitudes among professional French historians, as a concerted attempt was made to see the Algerian war in a more detached light. Instrumental in this move was the Contemporary History Institute in Paris (Institut d'Histoire du Temps Present) which organised a series of conferences, analysing the many different ways, political, social and economic, the war had impacted upon French society. One thing this initiative underlined was the difficulty of separating contemporary history from political commitment. Although never openly articulated as a methodological problem, large numbers of the historians involved, such as Jacques Juilliard and Michel Winock, had taken a clear ideological political position during the war and undoubtedly this carried over into their interpretations thirty years on.

With the thirtieth anniversary of the end of the war in 1992 the new openness extended to the media when French television featured the historian Benjamin Stora’s four part series, The Algerian Years, followed by Richard Copan’s documentary dealing with French opposition to the war, whilst at the cinema Bertrand Tavernier’s film portrait of French conscripts, The Undeclared War, prompted comparisons with the plight of Vietnam veterans. Combined with a fresh spate of conferences and history books, these documentaries opened up the complexity of the event, revealing the limitations of any history encrusted in accusation and counter-accusation.

Seeing the Algerian war as an objective event has been no less difficult in Algeria. Termed a war of liberation, the official memory of the conflict constructed a monolithic image which, in glorifying the FLN, ignored internal divisions during the war, as well as the contribution of rival political forces. Confronted with state censorship, challenging this mythology was a courageous task, limited largely to dissident historians in exile, most notably Mohammed Harbi. In this context the political impact of October 1988, when anti-government riots led to the demise of the one party system, was enormous.

The rapid liberalisation of the press that ensued allowed Algerians to examine the period 1954-62 in a more open manner, leading a younger generation of historians, such as Hassan Remaoun, to ask new questions about the past. Thereafter the confrontation between the army and the Islamic Salvation Front (FIS), following the former’s cancellation of elections in January 1992, has merely reinforced this spirit of enquiry. Faced with intensifying violence, where questionable methods used by the army to crush Islamic terrorism have created the dilemmas about ends and means experienced by Massu’s paratroopers forty years earlier, the new Battle of Algiers has given Algerian historians a clear imperative. More than ever, they have to link the past with the present, tracing the roots of the continuing crisis back to the period 1954-62 and beyond.

A recent conference at Salford University brought together historians and eye-witness participants, including professional officers, conscripts, as well as intellectual opponents of the war, to explore the image, experience and memory of the Algerian conflict from the viewpoint of the French army. Logistically speaking this was far from easy. Some former anti-war activists were suspicious that the conference was being used to rehabilitate the French army’s actions in Algeria. Nonetheless, once in motion it was a fascinating example of contemporary history in practice. Paul Leger, the expert in counter-insurgency warfare; Georges Mattei, the young reservist whose revulsion at the war led him eventually to side with the FLN; Sigg the deserter: forty years ago they would have been at each other's throats, yet now they were willing to sit together and talk openly about their actions and motivations.

Concluding the conference, the prominent anti-war intellectual, Andre Mandouze, was blunt and uncompromising. Given the continuing consequences of the conflict, the need for serious historical reflection is greater than ever he warned. Speaking thus Mandouze reminded us of the duty of contemporary historians as citizens. First and foremost they must stand back and bring a historical consciousness to the present day, saying difficult things which have political implications and risks. As such it is a duty not merely limited to contemporary Algeria, but also to current events in Ireland, Zaire and the former-Yugoslavia.

Martin Evans is a lecturer in French and European studies at the University of Portsmouth. With Ken Lunn he is the editor of War and Memory in the Twentieth Century (Berg,1997). 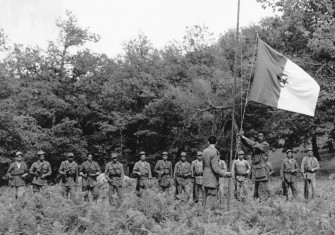 French Resistance and the Algerian War 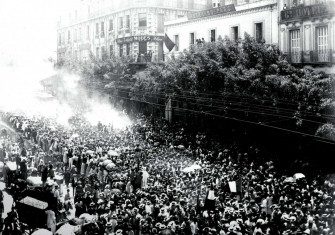 The Rights of France