Hanging on to Hanover

Three hundred years ago, in August 1714, the Protestant Elector of Hanover ascended to the thrones of Great Britain and Ireland, becoming George I. Graham Darby describes the latter phase of the personal union, which lasted until 1837. 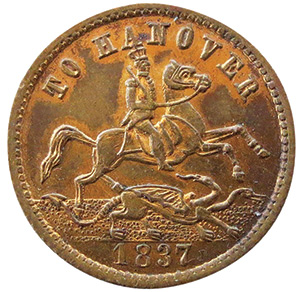 The personal union between the monarchs of England and the state of Hanover, the outcome of the Protestant Settlement signed in 1701, came to an end with the death of  William IV in 1837. The foreign secretary, Lord Palmerston, was delighted:

The Hanoverian Dynasty, and German prejudices which belonged to it, and which for a century have embarrassed and impeded our march both at home and abroad will cease. The Sovereign of England will no longer be hampered by considerations belonging to the petty state of Hanover; and I believe that since the accession of George I, these German politics have more or less continually had their influence on the Councils of England.