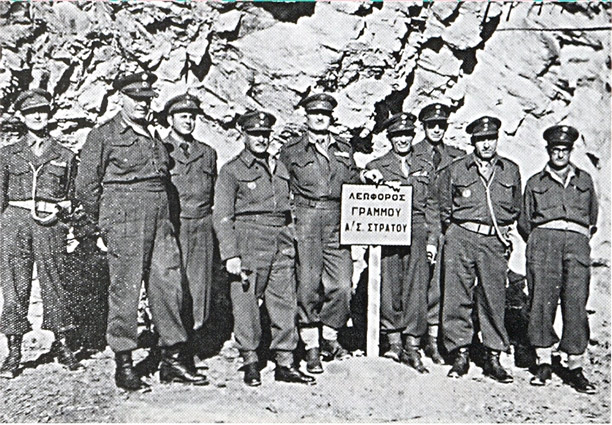 The postwar tension between the Western and Communist worlds came to bloodshed in Greece in the savage civil war of 1946-49 between the Greek Communist Party (KKE), fresh from jockeying for power in the resistance movement against the German occupation, and the royalist government restored by plebiscite in 1946. Estimated to have taken more than 80,000 lives, it made some 700,000 people homeless. The civil war inflicted worse damage on Greece than the Second World War itself and even by the 1990s the wounds had not entirely healed.

The Communist spearhead was the so-called Democratic Army of Greece, organised in the northern mountains by a former resistance leader, Markos Vafiadis, which preyed on the local villagers with what proved to be counter-productive effect. Men and women were forcibly conscripted and thousands of children were seized and sent to Communist countries to be educated as Marxist-Leninists. Markos received substantial aid from the Communist regimes in Yugoslavia, Albania and Bulgaria, while the royalist government was given arms, equipment and massive help by the Americans, who believed that the KKE was backed by Stalin, while the Greek Communists themselves complained angrily about lack of support from Moscow.

The rebel hit-and-run tactics scored many succcesses at first. At the behest of his political commissars, however, Markos tried to seize towns near the northern border in Greek Macedonia as the seat of a provisional Communist government, but conventional warfare did not suit his guerrillas and he was unable to hold his ground. The KKE made a serious mistake in 1948 when it took Moscow's side in the split between Stalin and Tito. This meant that aid from Yugoslavia stopped. After bitter internal rows Markos was purged as a 'defeatist' and disappeared, to be replaced by his rival Nikos Zakhariadis, the KKE's veteran Moscow-trained secretary-general.

In July 1949 Tito closed his frontier to the Democratic Army. In the following month, government infantry with artillery and air support decisively defeated the Democratic Army in the Grammos Mountains on the frontier with Albania. The rebels fought bravely and some positions were held to the last man. Most of the Communist remnant retreated into Albania and on October 16th the KKE announced through its 'Free Greek' radio that its forces had temporarily ceased operations in order to avoid 'the complete annihilation' of Greece. The war was not resumed. Deposed as secretary-general in 1956, Zakhariadis ended his life in exile in Siberia, where he died in 1973.