Hasankeyf - A City in Peril

Turkish archaeologists work against the clock to discover the secrets of ancient Hasankeyf before it is flooded by the waters of the proposed Ilisu dam. 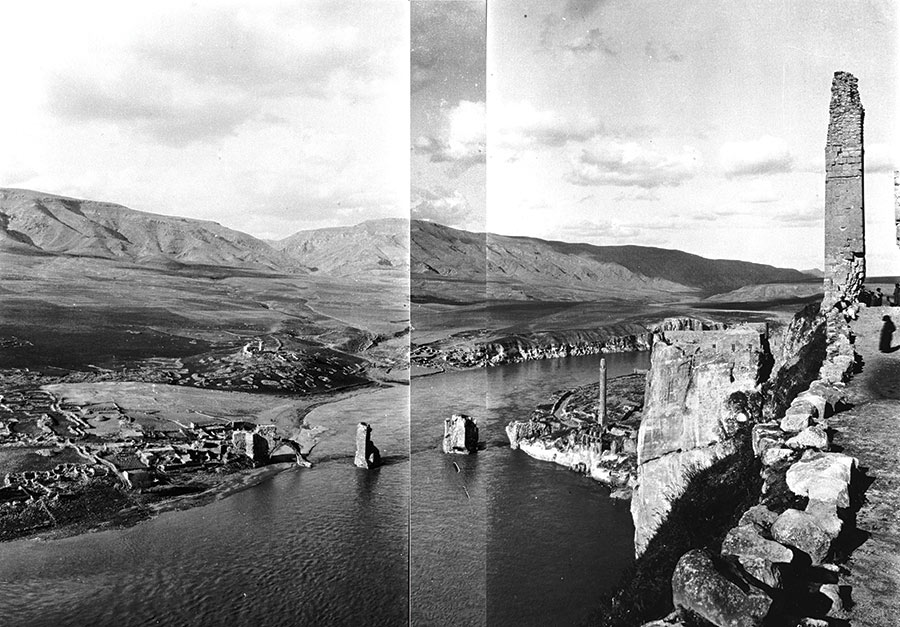 ‘Try to imagine a steep cliff rising from the water and crowned by a decaying castle, the whole face of it perforated with cave-dwellings of a very early date in which the present inhabitants live; and at the end of the cliff a ruined mosque with a minaret, from the side of which a grandiose and now broken medieval bridge stretches over the majestically winding river to the opposite shore.’

This is how Dr S. Guyer described his first sight of Hasankeyf as he sailed down the River Tigris through south-eastern Turkey, heading for Iraq. The German adventurer made his journey in the early 1920s, although if he went back today, little would have changed. What he would find is a small army of Turkish archaeologists working against the clock to discover the secrets of ancient Hasankeyf before it is flooded by the waters of the proposed Ilisu dam. The Turks say their aim is to have the dam operational by the next decade.

‘Ephesus is celebrating its 110th anniversary of excavations,’ says Professor Olus Arik, who is leading the dig at Hasankeyf. ‘We need a minimum of fifty years here and we have just nine or ten – unless of course we can stop the dam.’

Few people have even heard of Hasankeyf. For the past decade, the small town and much of the area around it in south-eastern Turkey has been practically inaccessible because of the Turkish-Kurdish civil war. Now, owing to the row over the building of the Ilisu dam and its potential impact on the environment, archaeologists and journalists are flocking to Hasankeyf to see what Professor Arik describes as the most ‘valuable, exciting, unique historical site in Turkey’.

The ruins and rock-cave houses of Hasankeyf tell of a history going back 2,000 years, although the original settlement could have dated back to the seventh century BC and the late Assyrian and Urartu times. The Romans called their frontier town Cephe (Rock) and fortified it against the Persians. In the Byzantine period, it was called Kiphas and became the seat of a Syriac Bishopric in the fifth century AD, and the centre of the Eastern Christian churches in the sixth and seventh centuries before it was occupied by the Arabs, who called it Hisn Kayfa.

The town was a staging post on the Silk Road and was fought over by the Damascus-based Omayyads, Abbasids from Baghdad and various Turkoman Seljuk tribes. It had its Golden Age as the splendid capital of the Artukids throughout the twelfth century. It was during this period that Fahreddin Kara Arslan built the magnificent bridge across the Tigris. The four monumental remnants of the sturdy archways are those that are seen today.

The Ayyubids, descendants of the great Kurd Saladin, captured Hasankeyf at the beginning of the thirteenth century. They were succeeded by the Mongols in 1260, who smashed the city badly, although Lt Colonel Chesney still described it as one of the ‘principal towns of Mesopotamia’ in the first of his four-volume survey of the Rivers Euphrates and Tigris, which he carried out by order of the British government in the 1830s.

There are three distinct areas in Hasankeyf: the citadel, the middle and lower towns. At all levels, there are remains of ancient hamams, water systems, mosques, monasteries and churches and public and private buildings. On the southern bank is the beautiful Ayyubid cylinder-shaped Zeynel Bey Tomb, decorated with blue-glazed brick and crowned with an onion-shaped dome. Today, the villagers live in and among the ruins of Hasankeyf in their mellowed stone houses with flower and vegetable gardens, flocks of sheep and herds of goats. It all creates a vast, living, open-air museum.

Hasankeyf is Professor Arik’s heartbreak and professional challenge. He began exploring in the early 1960s. ‘It was marvellous,’ he said. ‘Nobody had touched it. It was an original ruin. But they laughed at my plans. The Turks had a fixed, conditioned idea about heritage. The best meant only antique and anything else was unimportant.’

He began digging on his own initiative in 1986 when he learned about the plans to build the Ilisu dam and flood the area. He located a city centre by finding the crossing of two main streets and identified three districts with several levels – early Christian, early Islam, Seljuk and Ottoman. There were at least six large buildings from the Seljuk period in the lower city alone.

Just when he had gained the support of the Turkish authorities, all work stopped in 1991 because of fighting between the Turkish army and members of the Kurdistan Workers’ Party. Excavations only started again this summer.

Although Turkey is stuffed with such sites, Professor Arik says Hasankeyf is unique not just because of its stunning visual impact but because of the styles of architecture which can be seen there. Asian and eastern-Iranian concepts of building met Roman and Arabian designs. But there was no amalgamation or blending of the architectural styles. They simply existed, side by monumental side.

Although Professor Arik knows every stone and contour, his favourite pastime is to walk around Hasankeyf trying to read the secrets that lie under the ground. He showed me three levels of a floor and then pointed out that the first level was higher than the rest of the site to start with.

‘What’s underneath here is an important building, a church maybe or a temple,’ he said. ‘It’s got to be of major significance because of the difference in the levels. We’ve got to find out, dam or no dam.’

The Ministry of Culture is spending about £76,000 on archaeological explorations throughout the area to be flooded by the Ilisu dam and related works downstream. The Hasankeyf team will get about £15,000. Professor Arik compares it to a glass of water in the desert.

Part of the citadel area will remain above the water. The official idea is to preserve as much of it as possible and make it into a national museum, with artefacts and selected buildings rescued from the lower and middle towns. Professor Arik is sceptical. ‘We need a proper restitutional project. You can’t just carry stones away,’ he said.

If Hasankeyf were in western Europe, it would be a premier site, attracting thousands of tourists every year. Its mayor, Vasap Kusen, speaks for many people when he talks about the sadness of losing such a historical place. But the Turks say that they need to build the equivalent of twenty Ilisu dams over the next ten years if they want to meet the growth in the demand for electricity. The loss of such a cultural treasure as Hasankeyf seems a high price to pay.