John Paul II was elected on October 16th, 1978. He was the first non-Italian pope to be elected in four centuries. 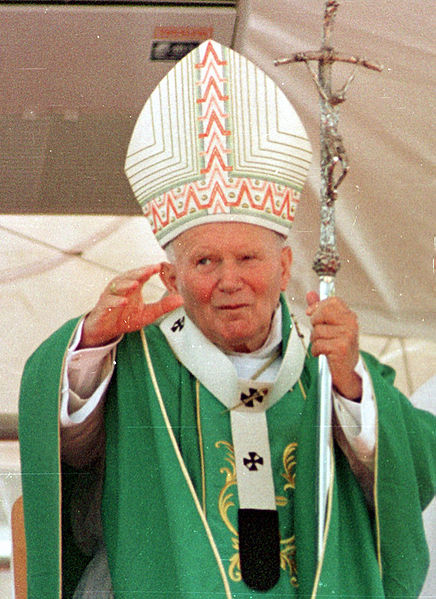 The first non-Italian pope to be elected in four centuries, and widely regarded as one of the most memorable, was born Karol Jozef Wojtyla in 1920 in a small town in Poland, near Krakow. His mother died in 1929, when he was a schoolboy of eight. His studies at university in Poland were interrupted by the German invasion in 1939, but he was ordained priest after the war, in 1946, and went on to hold a university professorship at Lublin. Rising in the Church hierarchy, he was Archbishop of Krakow from the end of 1963 and was created a cardinal in 1967 by Pope Paul VI.

Paul VI died in 1978 and was succeeded in August that year by John Paul I, the former patriarch of Venice, who died on September 28th after the shortest pontificate in modern times, lasting only thirty-three days. The cardinals gathered again on October 14th, a Saturday, behind the sealed doors of the Sistine Chapel to choose his successor. There were 111 electors present (cardinals over eighty were not allowed a vote). The figures vary, but according to one tally there were twenty-five from Italy and thirty from the rest of Europe, nineteen from Latin America, twelve from North America, twelve from Africa, nine from Asia and four from Oceania. Lots were cast for the nasty little rooms in the Apostolic Palace in which the cardinals slept on borrowed hospital or seminary beds, with a bedside light too dim to read by, a wash-basin, a slops bucket, a writing table and a kneeler for prayers. Each was issued with one roll of toilet paper, two ballpoint pens, two very small towels, one bar of soap and an ashtray. The point was to encourage the cardinals not to dally over their choice;  one of them said it was like being buried alive.

The conclave lasted through three days and eight ballots. Voting was strictly secret and reports of the proceedings have to be taken with some salt. The leading candidates were both Italian: Cardinal Giuseppe Siri, archbishop of Genoa, who has been described as ‘the archconservative’s archconservative’, and Cardinal Giovanni Benelli, the more liberal archbishop of Florence. According to his secretary, Siri came within a handful of votes of election at one stage, but support for him and Benelli was so equally divided that it grew clear that neither was likely to gain the necessary majority of two-thirds of the votes plus one, which meant 75. Late on the second day of the conclave, the archbishop of Vienna, Cardinal Franz König, suggested Cardinal Wojtyla as a compromise candidate. Some of Siri’s supporters joined with some of Benelli’s and most of the American cardinals in voting for Wojtyla. The tide swung Wojtyla’s way and he was elected on the eighth ballot with more than 90 of the 111 votes. He said in response, ‘With obedience in faith to Christ, my Lord, and with trust in the Mother of Christ and the Church, in spite of great difficulties, I accept’.

Observers saw the white smoke curling up from the Sistine Chapel soon after 6pm and the result of the conclave was announced according to custom in Latin from the balcony of St Peter’s Basilica. Some of the waiting crowd thought from the new pope’s surname that he must be an African, but at 7.15 pm he appeared on the balcony and made a speech, in almost flawless Italian, in which he told the crowd that he had been dismayed at the nomination, but had accepted it ‘in the spirit of obedience to Our Lord and with total trust in his Mother, the Most Holy Madonna.’

The new pope, who was fifty-eight, was installed on October 22nd and took the name of John Paul II in honour of his predecessor, who had himself taken the names of both his predecessors – John  XXIII and Paul VI. At sixty he survived an assassination attempt in Rome in 1981, when he was shot in St Peter’s Square.

John Paul II was noted for conservatism, strength of character, phenomenal energy and zeal for hard work. As well as Polish, Latin and Italian, he spoke English, French and German, and, instantly recognizable in his ‘popemobile’, he travelled widely, attracting enormous crowds and addressing huge and enthusiastic audiences. He was probably seen by more people than anyone before in history.

After a pontificate of twenty-six years, John Paul II died in 2005 in Rome, aged eighty-four. He had canonized more saints, more widely spread around the world, than any of his predecessors and named 150 new cardinals from all five continents. He had made a powerful impact on the world’s religious faiths and millions went to Rome to see his body lying in state in St Peter’s.