Did the first Christian Roman emperor appropriate the pagan festival of Saturnalia to celebrate the birth of Christ? Matt Salusbury weighs the evidence. 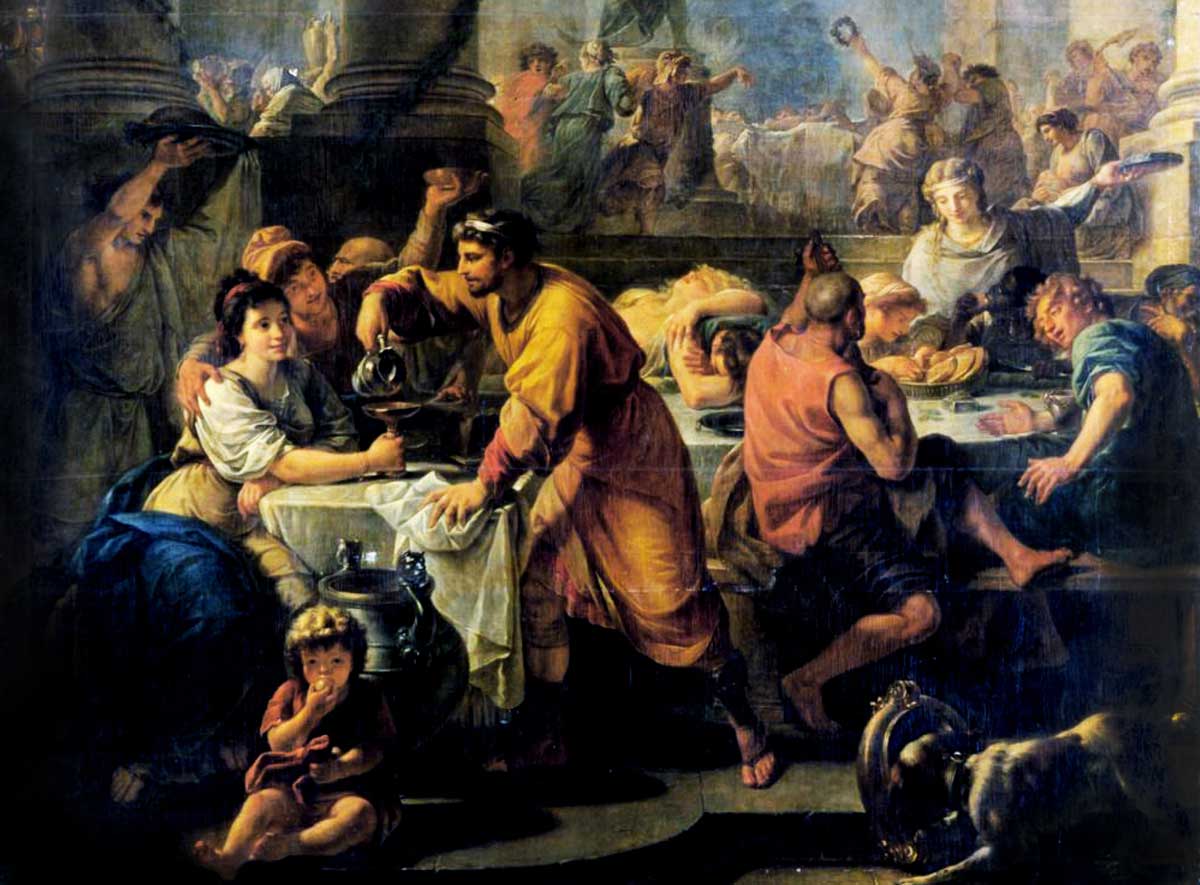 It was a public holiday celebrated around December 25th in the family home. A time for feasting, goodwill, generosity to the poor, the exchange of gifts and the decoration of trees. But it wasn’t Christmas. This was Saturnalia, the pagan Roman winter solstice festival. But was Christmas, Western Christianity’s most popular festival, derived from the pagan Saturnalia?

The first-century AD poet Gaius Valerius Catullus described Saturnalia as ‘the best of times’: dress codes were relaxed, small gifts such as dolls, candles and caged birds were exchanged.

Saturnalia saw the inversion of social roles. The wealthy were expected to pay the month’s rent for those who couldn’t afford it, masters and slaves to swap clothes. Family households threw dice to determine who would become the temporary Saturnalian monarch. The poet Lucian of Samosata (AD 120-180) has the god Cronos (Saturn) say in his poem, Saturnalia:

‘During my week the serious is barred: no business allowed. Drinking and being drunk, noise and games of dice, appointing of kings and feasting of slaves, singing naked, clapping … an occasional ducking of corked faces in icy water – such are the functions over which I preside.’

Saturnalia originated as a farmer’s festival to mark the end of the autumn planting season in honour of Saturn (satus means sowing). Numerous archaeological sites from the Roman coastal province of Constantine, now in Algeria, demonstrate that the cult of Saturn survived there until the early third century AD.

Saturnalia grew in duration and moved to progressively later dates under the Roman period. During the reign of the Emperor Augustus (63 BC-AD 14), it was a two-day affair starting on December 17th. By the time Lucian described the festivities, it was a seven-day event. Changes to the Roman calendar moved the climax of Saturnalia to December 25th, around the time of the date of the winter solstice.

From as early as 217 BC there were public Saturnalia banquets. The Roman state cancelled executions and refrained from declaring war during the festival. Pagan Roman authorities tried to curtail Saturnalia; Emperor Caligula (AD 12-41) sought to restrict it to five days, with little success.

Emperor Domitian (AD 51-96) may have changed Saturnalia’s date to December 25th in an attempt to assert his authority. He curbed Saturnalia’s subversive tendencies by marking it with public events under his control. The poet Statius (AD 45- 95), in his poem Silvae, describes the lavish banquet and entertainments Domitian presided over, including games which opened with sweets, fruit and nuts showered on the crowd and featuring flights of flamingos released over Rome. Shows with fighting dwarves and female gladiators were illuminated, for the first time, into the night.

The conversion of Emperor Constantine to Christianity in AD 312 ended Roman persecution of Christians and began imperial patronage of the Christian churches. But Christianity did not become the Roman Empire’s official religion overnight. Dr David Gwynn, lecturer in ancient and late antique history at Royal Holloway, University of London, says that, alongside Christian and other pagan festivals, ‘the Saturnalia continued to be celebrated in the century afterward’.

The poet Ambrosius Theodosius Macrobius wrote another Saturnalia, describing a banquet of pagan literary celebrities in Rome during the festival. Classicists date the work to between AD 383 and 430, so it describes a Saturnalia alive and well under Christian emperors. The Christian calendar of Polemius Silvus, written around AD 449, mentions Saturnalia, recording that ‘it used to honour the god Saturn’. This suggests it had by then become just another popular carnival.

Christmas apparently started – like Saturnalia – in Rome, and spread to the eastern Mediterranean. The earliest known reference to it commemorating the birth of Christ on December 25th is in the Roman Philocalian calendar of AD 354. Provincial schisms soon resulted in different Christian calendars. The Orthodox Church in the Eastern (Byzantine) half of the Roman Empire fixed the date of Christmas at January 6th, commemorating simultaneously Christ’s birth, baptism and first miracle.

Saturnalia has a rival contender as the forerunner of Christmas: the festival of dies natalis solis invicti, ‘birthday of the unconquered sun’. The Philocalian calendar also states that December 25th was a Roman civil holiday honouring the cult of sol invicta. With its origins in Syria and the monotheistic cult of Mithras, sol invicta certainly has similarities to the worship of Jesus. The cult was introduced into the empire in AD 274 by Emperor Aurelian (214-275), who effectively made it a state religion, putting its emblem on Roman coins.

Sol invicta succeeded because of its ability to assimilate aspects of Jupiter and other deities into its figure of the Sun King, reflecting the absolute power of ‘divine’emperors. But despite efforts by later pagan emperors to control Saturnalia and absorb the festival into the official cult, the sol invicta ended up looking very much like the old Saturnalia. Constantine, the first Christian emperor, was brought up in the sol invicta cult, in what was by then already a predominantly monotheist empire: ‘It is therefore possible,’ says Dr Gwynn, ‘that Christmas was intended to replace this festival rather than Saturnalia.’

Gwynn concludes: ‘The majority of modern scholars would be reluctant to accept any close connection between the Saturnalia and the emergence of the Christian Christmas.’

Devout Christians will be reassured to learn that the date of Christmas may derive from concepts in Judaism that link the time of the deaths of prophets being linked to their conception or birth. From this, early ecclesiastical number-crunchers extrapolated that the nine months of Mary’s pregnancy following the Annunciation on March 25th would produce a December 25th date for the birth of Christ.