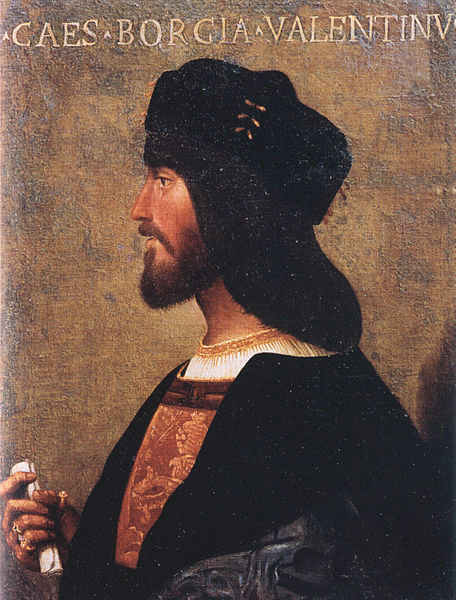 Cesare Borgia (1475-1517) was the most brilliant, ambitious and forceful of the illegitimate children of Cardinal Rodrigo Borgia, who became pope as Alexander VI in 1492. Ten years later, in his mid-twenties, Cesare was known for the beauty of his person, his clothes and his women. He was also captain-general of the papal army and busy, with French help, in campaigns north of Rome to re-establish papal authority in Central Italy and carve out a principality as a permanent Borgia family power base. Adopting the motto Aut Caesar, aut nihil (‘Either Caesar or nothing’), in 1499 he took the cities of Imola and Forli, in 1500-01 Rimini, Pesaro and Faenza. In June 1502 Urbino surrendered, its previous master and faithful ally of Cesare, Guidobaldo da Montefeltro, forced to flee in the night with nothing but the clothes on his back.

Cesare moved on to Imola in September, from which he intended, with the technical assistance of Leonardo da Vinci, to take Bologna, the biggest city in the region. Some of his captains, however, had become alarmed by the scale of his ambitions, which threatened their own lordships in central Italy. They hatched a plot to take Cesare unawares with their own men. The leaders were Vitellozzo Vitelli, the syphilitic lord of Citta di Castello, who was said never to have done a warm-hearted act in his life, Oliverotto da Fermo, who for power had murdered his own uncle, Francesco Orsini of Gravina, and Paolo Orsini, lord of Palombara, who was known unkindly as ‘my lady’.

News of the conspiracy leaked to Cesare, who sent word to the plotters, assuring them of his continuing regard and promising them substantial rewards if they remained true to him. He also arranged for more French troops and hired a body of Swiss mercenaries. With him from October was an ambassador from Florence, Niccolo Machiavelli, who was not much older. His experience of Cesare at first hand in this situation had a powerful influence on Macchiavelli’s picture of the ruthless and cynical Renaissance prince.

In October, Cesare brought his charm to bear on Paolo Orsini and gave him a formal treaty of reconciliation, which each of the leading conspirators was to sign. After tortuous discussions and emendations, while Cesare bided his time, Orsini brought the signed pact back to Imola late in November. Cesare now moved to Cesena and ordered the conspirators to take Sinigallia on the Adriatic coast. Three days before Christmas – to lull the plotters into a false sense of security, according to Machiavelli – Cesare sent most of his French reinforcements away. The conspirators entered Sinigallia on December 26th, and suggested Cesare join them, as the citadel would surrender only to him. Cesare marched there, sending orders that the plotters were to withdraw their men from the city to make room for his troops, leaving Oliverotto to hold it.

Early on December 31st, Cesare arrived at Sinigallia with his army. He beamed graciously upon the conspirators, who were solicitously surrounded by smiling friends while his army neatly cut them off from their men. More friends went to reassure Oliverotto. They all went into a selected house in the town where at a signal from Cesare, the smiling suddenly stopped and the conspirators were overpowered.

He let them stew until that night. In the early hours of the next morning, Vitelozzo and Oliveretto were brought up and seated back to back on a bench with a cord tied round both their necks. An iron bar was put through the cord and turned until it strangled them both to death, comrades to the end. The Orsinis were garrotted the following month.

Europe rang with Cesare’s praises for a master stroke of subtlety and craft. Machiavelli called it ‘a rare and wonderful exploit’. Venice and Florence sent messages of congratulation and approval. The king of France called it ‘worthy of ancient Rome’.