Recent restrictions on the right to abortion in the United States imitate policies enacted 150 years ago.

A new law came into effect in the state of Texas on 1 September 2021, which criminalised abortion after the sixth week of pregnancy. This is an addition to the recent cascade of state legislation – at least 90 laws in the first six months of 2021 – designed to undermine the 1973 landmark Roe v Wade decision by the US Supreme Court, which had made abortion more accessible. Supreme Court Justice Sonia Sotomayor, in her entreaty to overturn the act, described how the ‘Texas legislature has deputised the state’s citizens as bounty hunters, offering them cash prizes for civilly prosecuting their neighbours’ medical procedures’. The law promises a financial reward of up to $10,000 (approximately £7,200) to anyone who aids the successful prosecution of someone for defying the so-called ‘Texas Heartbeat Act’. Potential targets could include: a pregnant person; an abortion provider; insurance companies; and, it has been suggested, taxi drivers who transport these patients. In Justice Sotomayor’s words, the act ‘takes the extraordinary step of enlisting private citizens to do what the state could not’.

Supporters of the Texas Act hope that, by conscripting citizens to surveil those seeking abortions, they will ward off legal challenges against state employees. This measure is the latest attempt to overcome the fact that abortion is incredibly difficult to police, as its history proves. Abortion has posed a challenge to conventional policing methods for a number of reasons: medically, spontaneous miscarriage and induced abortion can be indistinguishable; practically, abortion occurs in private spaces beyond the traditional reach of law enforcement; and, legally, any potential witnesses to a procedure would typically be implicated in the crime and, therefore, invested in shielding the act from the state’s punitive gaze. Because of these various obstacles, throughout history officials have invented new methods to intervene in women’s reproductive lives.

The state-by-state advance of abortion restrictions in the 21st century imitates the first wave of anti-abortion legislation, which began more than 150 years ago. Abortion was widely practised and tolerated for much of American history prior to 1850. Hitherto, medical, legal and popular understanding held that a pregnancy began at the point of ‘quickening’, when a mother first felt the foetus move, typically around the 16th week. Before that point of gestation, a spontaneous or induced miscarriage was akin to a skipped menses. In the late 19th century, doctors embarked on a campaign to outlaw the practice, motivated by a desire to solidify their professional power and extend their medical monopoly to childbirth. Previously, pregnancy and delivery were the preserves of midwives, who, unlike most professionalising physicians, tended to be women trained via traditional autodidactic methods. Also, unlike doctors, midwives in the US typically held an important role within the communities they served and to which they belonged, namely working-class, immigrant and African American families. In campaigning to criminalise abortion, predominantly white male physicians attempted to claim the right to decide when a pregnancy was viable, wresting this authority from the hands of women. By the turn of the 20th century they had succeeded and abortion at any stage of gestation was a crime in all states.

From these beginnings, efforts to police abortion distorted the doctor-patient relationship and transformed clinicians into investigators. In early 20th-century Illinois, when a woman presented in a hospital following an abortion gone awry, doctors, in concert with the police, questioned her about her medical and sexual history – who was responsible for this pregnancy? – and the circumstances of the abortion – who performed the procedure and what technique did they use? As women lay in a hospital bed on the brink of death, they endured intimate and coercive questioning to serve the aims of prosecution, as the pre-eminent historian of abortion Leslie J. Reagan has demonstrated. This testimony would serve as a woman’s ‘dying declaration’ to enable state lawyers to pursue those who supported and provided the abortion.

Policing priorities in abortion cases often mirrored broader power inequalities in society. As in contemporary Texas, to meet the regulatory challenges posed by abortion, law enforcement agents engineered innovative and often insidious means of surveillance. In the 1910s, the New York Police Department assigned its first female employees to investigate abortion. ‘Special Squad No. 2’, which handled these cases, consisted of a team of women experienced in investigating ‘female’ crimes and criminals, such as fortune-tellers and ‘quack’ doctors. This squad included Isabella Goodwin, the first female detective in the United States. To gather evidence in these cases, the police went undercover, posing as pregnant women seeking an abortion. Extant prosecution records reveal that investigations did not target affluent, white doctors and their genteel clientele, but rather focused on midwives from central, southern and eastern Europe, who furnished crucial care to women and children from working-class, immigrant communities. In order to meet the legal threshold of intent, policewomen needed to induce a midwife to agree to perform an abortion for them. To do so, they used foreign language skills to tell a story of vulnerability to convince the midwife that they were in desperate need of her services. After securing the midwives’ consent and undergoing a pelvic examination, the police officers arrested the practitioner.

During this initial period of illegal abortion, officials often declined to prosecute the women seeking abortion. Nonetheless, investigations proved a punishing process for many of the women they ensnared. In the 1930s and 1940s, policing efforts expanded to large-scale abortion outfits that had sprung up in urban centres, providing highly medicalised services in private offices. Among the most prolific of these underground networks was the Pacific Coast Abortion Ring (PCAR), which ran abortion outfits in California, Washington and Oregon. As Alicia Gutierrez-Romine showed in From Back Alley to the Border: Criminal Abortion in California, 1920-1969 (2020), PCAR was staffed by doctors and experienced abortionists trained in the comparatively safe ‘vacuum aspiration’ technique, which is still widely used today. Police orchestrated raids on premises such as those operated by PCAR, which got extensive coverage in sensationalised press accounts. The New York Times reported such arrests under the headlines ‘Abortion Mill Case Is On’, ‘Physician and Woman Lawyer Who Ran “Assembly Line Mill” to Serve Concurrent Terms’ and ‘Abortionist Sentenced: Judge Denounces Park Avenue Doctor for Ingratitude’. While the state rarely prosecuted women for seeking abortions, the investigative process punished these women by forcing them to partake in protracted court proceedings – which could last years – and pressuring them to reveal intimate details of their private medical and sexual lives.

From the mid-century, doctors sought to reassert their authority over abortion by establishing ‘abortion committees’ in hospitals. These committees consisted of a range of physicians, including obstetricians and psychiatrists, who met to assess patients’ abortion requests and judge whether the procedure was medically necessary. These boards sought to navigate the legal quagmire abortion represented for doctors and were a defensive measure to protect the profession from allegations of disrepute, as the historian Rickie Solinger has shown. Some physicians justified the success of these committees with reference to the decrease of hospital abortions. These abortion committees transformed doctors into judges and effectively placed women seeking therapeutic abortions on trial.

In 21st-century cases we see the historic trends converge: medical relationships transformed, inequalities perpetuated and women punished. In 2015 Indiana prosecutors charged Purvi Patel with illegally inducing her own abortion under the ‘feticide statutes’ on the state’s law books. Having driven to her local hospital as she was bleeding heavily following a miscarriage, Patel underwent emergency surgery. When she awoke, she found police officers by her bedside; her doctor had reported their suspicions that Patel induced an abortion. The case proceeded to court and the judge initially handed down a sentence of 20 years, which was later overturned. It is notable that this excessive police and prosecutorial vigour, which is reminiscent of a Margaret Atwood novel, targeted an Indian American woman. As the National Asian Pacific American Women’s Forum highlighted, these reproductive prohibitions are felt most acutely by women of colour, immigrant women and those from low-income backgrounds.

For state legislatures, abortion has proved a locus for policy innovation, both historically and today. In turn, policing efforts have upheld existing power hierarchies in society and reinforced gendered, racialised and socio-economic inequities. As we near the 50-year anniversary of Roe v Wade in 2023 and laud its role in ending over a century of devastating policing practices, we must face the reality that many women are living through a second era of criminal abortion in the United States today.

Elizabeth Evens holds a PhD from University College London, where her research focused on the relationship between gender, medicine and policing. 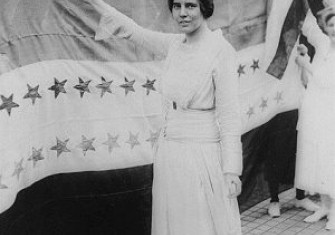 The Rise and Fall of the Equal Rights Amendment 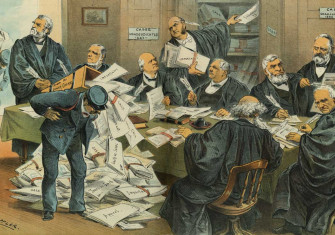