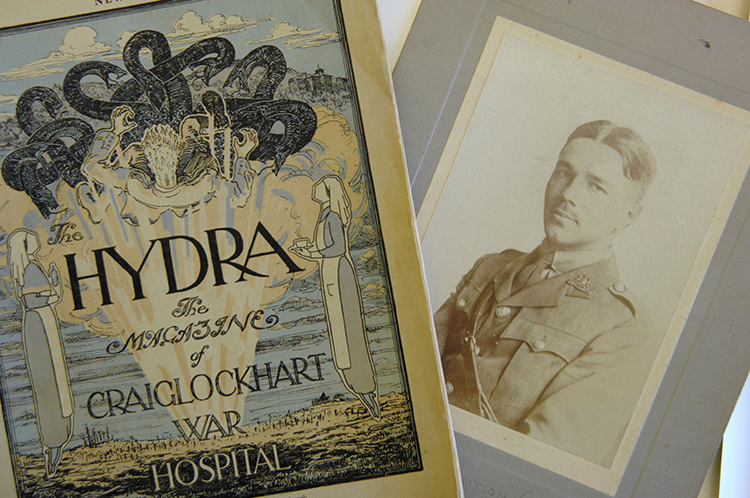 During the First World War, specialist hospitals were established, intended to ‘cure’ patients of shell shock and send them back to the front. One curative approach was ergotherapy, or ‘cure by functioning’, a treatment we would today identify as occupational therapy, which encouraged patients to remain active and take part in work and recreational activities.

This emphasis on activity as cure is rooted in the changes to mental health care which began with the work of ‘mad-doctor’ William Battie in the 1700s. Care for ‘the insane’ shifted away from the more oppressive methods employed in early asylums, towards humane care and moral discipline.

One of the key changes – alongside an emphasis on regimen, work and recreation – was the prioritisation of patients’ creative expression. In the long 19th century, patients at sanatoria were encouraged to paint, knit and write poetry and prose as part of their care.

As a result of this, a number of establishments, from 1837 until the mid-20th century, produced patient-led hospital magazines. Craiglockhart War Hospital, a military psychiatric hospital in Edinburgh, introduced a hospital magazine in 1917, for which some soldiers wrote as part of their therapeutic treatment.

It was called The Hydra, in reference to the hospital’s prewar role as a centre for hydrotherapy, where the Victorians had come for water treatments. It also evoked the many-headed monster of Greek mythology, reinforced by its cover image of the terrible creature – a reference writer John Garth says was ‘wry humour by officers suffering from war trauma’.

Edited for a time by Wilfred Owen and including poems by fellow writer Siegfried Sassoon, who referred to the hospital as ‘Dottyville’, The Hydra served as a platform for patients to express their creativity. Sassoon’s poem ‘Dreamers’ was first published in its pages, and Owen’s poems ‘Dulce et Decorum est’ and ‘Anthem for Doomed Youth’ were written during his time at the hospital.

The Hydra was, and still is, a valuable document for understanding the inner lives of those suffering from shell shock and seeking psychological amelioration through the arts. It also enabled patients to showcase their creative interpretations of the war to a wider audience. The team behind the magazine was aware of this and delighted in it: one editorial proclaimed, ‘The Hydra has already acquired a footing in the world outside, and when we found a copy reposing bashfully in a hairdresser’s shop we were overcome with joy.’

Craiglockhart is thought to be a key hospital in revolutionising mental health care after the First World War and the double outcome of The Hydra – in its advocating of patient care and its prioritising of patients’ voices – played an important role in this. Through The Hydra, patients could unite their voices with others advocating change.

The historian Tracey Loughran has suggested that shell shock provided a powerful impetus for reform of the mental health care system, demonstrating a need for effective and immediate treatment for those suffering from what we now call post-traumatic stress disorder. Although there was a strong movement for reform, the Mental Treatment Act, which made provision for voluntary treatment at outpatient clinics, was not passed until 1930. Likewise, despite this prominent challenge to the government’s inadequate mental health care facilities, it appears that attitudes within the military did not change.

Institutional improvements were very slow, which meant that individual doctors had to carry the lessons learned from helping shell-shocked patients into their postwar careers. Mental health was not a priority for the government, nor did military authorities maintain a psychiatric service, despite the fact that 80,000 officers and ordinary soldiers had suffered a debilitating mental disability by the end of the war.

Today’s system for providing mental health care is much more robust and it is recognised that creativity can play a key role in psychological wellbeing. This, however, is jeopardised by continuous cuts to arts funding and to the National Health Service. April 28th marks 100 years since the first publication of The Hydra and it is worth using this centenary to think about the battles which have been fought over the last century to advance understanding of, and provision for, mental health care.

Emily Turner is a PhD student at the University of Sussex, researching creativity in mental health.