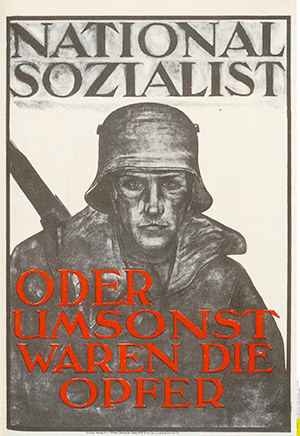 Few words in regular use in historical writing can have been abused as much as the word ‘Nazi’. At the very least it has proved a persistent grammatical challenge for generations of students who fall into the trap of writing ‘Nazi’s’ or ‘Nazis’  ‘ as the plural of Nazi and ‘Nazis’ as the possessive without an apostrophe, when it should be the other way around. This has become so widespread a practice that the mistake profits from a growing linguistic inertia. Soon it will be designated as an anomaly we can all live with, like the misuse of ‘impact’ as if it were a verb – as in ‘the Nazi’s impacted the German political system’.

In truth this is the least of the problems. The real issue is the indiscriminate use of the term ‘Nazi’ to describe anything to do with German institutions or behaviour in the years of the dictatorship between 1933 and 1945. It is common practice to talk of the ‘Nazi Army’, or the ‘Nazi Air Forces’, or ‘Nazi atrocities’, or ‘the Nazi economy’ as if everything in Germany under Hitler was uniquely and unambiguously National Socialist. The result is a complete lack of historical precision. ‘Nazi’ becomes a shorthand term that obscures more than it explains. Historians who write about the Soviet Union under Stalin do not usually describe its features as ‘Commie this’ or ‘Commie that’, any more than historians of British party politics in the interwar years talk about ‘Tories’ and ‘lefties’ rather than the Conservative Party and the Labour Party.

The term originated in the 1920s when contemporaries searched for some way of getting round the long-winded title of the party – the National Socialist German Workers Party (NSDAP). It was used chiefly by the enemies of the party and never by the regime itself. The term ‘Nazi’ or ‘the Nazis’ had strongly negative associations; it was employed as a quick way of describing a movement popularly associated in the mind of left-wing critics outside Germany with authoritarian rule, state terror, concentration camps and an assault on the cultural values of the West. Psychologists even suggested that there was such a thing as a ‘Nazi mind’ to explain why members of the party were so brutal, aggressive and mendacious. The term then, and now, was loaded.

There are many ways in which the uncritical use of  ‘Nazi’ distorts the German reality during the Hitler years. The NSDAP incorporated only a fraction of the German population. Even those in the notorious SA (Sturmabteilung) did not have to be members of the party. The career policeman who was appointed to head the Gestapo, Heinrich Müller, was not even a party member. In 1933 two thirds of Germans had voted for other parties and if they had to pay lip-service to the new regime this did not necessarily make them into ‘Nazis’. There was also a clear line between the NSDAP and the state, though there were many officials, policemen and lawyers who had a foot in both camps. For many Germans who were not enthusiastic for the new regime – schoolteachers, civil servants, businessmen – membership of the party became more or less a requirement. Significantly, members of the German armed forces could not at the same time be party members, though during the war the rule was not applied absolutely. The ‘Nazi army’ was certainly used by the regime for its own purposes, but it was predominantly a German army, not an army of Nazis.

The failure to use the term with more precision has important consequences for the way the history of the Third Reich is written. It implies that the regime and the party dominated German institutions and social groups to an unprecedented extent; which is why the Allies in 1945 were so keen on a comprehensive national programme of ‘Denazification’ and re-education for the German population. The indiscriminate use of the term also abstracts the dictatorship from the history that went before it and the history that followed Hitler’s defeat. The blanket assumption of ‘Nazi’ characteristics obscures the wide variety of institutions, organisations, cultural events and social tensions that can be found at every level under the Hitler regime. These phenomena need to be understood, and to do so they require a more sophisticated historical vocabulary.

The obvious response is to ask what terms should be used instead? German scholars have always used the acronym NSDAP or the shorter ‘National Socialist’ prefix (as in NS-Regime) or simply the term ‘National Socialism’. These are more cumbersome and less easily recognised than ‘Nazi’, but they do open the way to the employment of a less strident language for understanding the dictatorship and its component parts. This is not to suggest that a different language would make many of its policies any less intolerable or wicked, but it would assist a more careful reconstruction of the narrative of dictatorship and the many contradictions that existed under the umbrella of ‘totalitarian’ control.

It might also be objected that to challenge the use of the term ‘Nazi’ outside Germany is futile, when the universally pejorative view of the Hitler dictatorship and all those Germans who went along with it seems to justify its use. Sloppy language is nevertheless an enemy to proper historical explanation. It is not mere nit-picking to argue that ‘the Nazi army’ or ‘Nazi industry’ are meaningless terms, but instead a recognition that the popular obsession with everything as ‘Nazi’ fails to advance our understanding of how the dictatorship was possible and how its historical impact on German society can be judged. Perhaps it is time to say ‘goodbye to the Nazi’s’.

Richard Overy is Professor of History at the University of Exeter. His book, The Bombing War: Europe 1939-1945, is published by Allen Lane in September.