The Treaty of Fontainebleau saw Napoleon exiled to Elba. Why was he treated so lightly? After losing the Battle of the Nations (or Leipzig) in October 1813, Napoleon Bonaparte was deposed; but by the Treaty of Fontainebleau of  April 11th 1814, he was made ruler of the island of Elba, with an administrative staff and a guard of 400 men. Why he was treated so lightly? After all, he had subjugated most parts of Continental Europe, threatened Britain with invasion, and burned Moscow. No effort was made either by the French or by the international community, to bring him to justice. Furthermore, Elba was only 40 miles from his native Corsica, 150 miles from mainland France and even closer to Italy, where his family continued to hold power.

If he had been content to busy himself with improvements to the island and with writing his memoirs, Napoleon might have spent his remaining years in comfortable retirement; but he was only 45 in 1814 and, given the highly active life that he had led, it is hardly surprising that he was not so content. In fact, he stayed on Elba for only 300 days, before escaping.

Though there are many who would still defend Napoleon as a great revolutionary, law-giver and polymath, there have always been others who have condemned him as a tyrant. He faced severe criticism, even within in France, from Chateaubriand and Mme de Staël, and would have faced more if he had not had an efficient police force and imposed strict censorship. It was hence conceivable that someone, or some group of powers, might have tried to bring Napoleon to justice, and many of his former servants were punished.

Why were no steps taken against their master? The answer is partly political, partly legal. Politically, we have to remember that at the beginning of 1814 Napoleon had been defeated in the field, but he still remained Emperor of France, recognised as such by many previous treaties. Moreover, he was married to Marie-Louise, daughter of the Austrian Emperor and an empress herself since 1810. The victorious Allies wanted to restrain Napoleon’s ‘ambition’, but not to crush him entirely, let alone punish him. From a legal perspective, there was then no  machinery, for bringing a defeated head of state to trial. Accordingly, the discussion of Napoleon’s ‘guilt’, as summarised and analysed in Pieter Geyl’s great book, Napoleon For and Against, had to be conducted in terms of politics and morality, rather than the law.

Stephen Cooper is a retired solicitor and historian. Ashley Cooper resumed his interest in history after retirement from business. 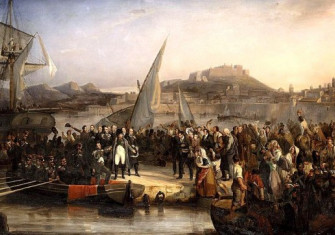