The AK-47 and the Evolution of War 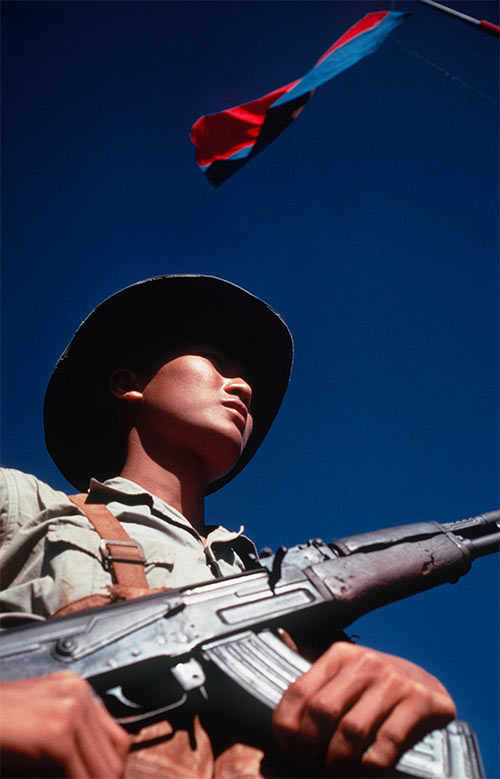 Few guns achieve iconic status. One that indubitably has is the AK-47 – the Kalashnikov. Simply engineered, reliable and easy to use, it is now nearly ubiquitous, with an estimated 100 million currently in circulation. Instantly recognisable the world over, it is a subject of political iconography from the gable-ends of Belfast to the flags of Hezbollah and Mozambique and is the weapon of choice for generations of freedom fighters, terrorists and jihadis. It has become ‘the people’s gun’.

With the book market teeming with ‘micro-histories’ of everything from cod to sugar to the Atlantic Ocean itself, it was perhaps inevitable that someone should seek to tackle a brand as powerful and as malevolently cool as the AK-47. Yet, C.J. Chivers’ book goes further than retracing the story of the weapon’s development and its subsequent emergence as an icon – fascinating though it is. This, he claims, is a gun that has changed the very nature of warfare and has even altered history itself.

It is certainly a remarkable story. According to the Soviet mythology, Mikhail Kalashnikov – himself the son of an exiled kulak – was the original proletarian hero: a man whose patriotism and class consciousness, fired by service in the Second World War, had led him to single-handedly design the most successful weapon of all time.

As ever, the truth is rather more prosaic. As Chivers relates, the gun was a hybrid of existing rifle technology and was the product of more minds than one. Thus, though Kalashnikov certainly played a central role in its development, there were some who later questioned whether his name should have been appended to the weapon at all.

The gun’s real, large-scale debut would be in Vietnam, where its rivalry with the American M-16 would carry with it much wider connotations: capitalist versus communist, peasant versus professional soldier. The Kalashnikov won hands down. More reliable, more hardy and cheaper to produce, it garnered many plaudits, even being preferred by some US marines to their standard-issue weapon.

Chivers writes very well, as one would expect from a Pulitzer Prize winner. His descriptions of setpieces, such as a jungle fire-fight or an attempted assassination, are exemplary. He also works hard to disentangle the mythology surrounding the weapon’s development and is admirably clear when explaining technological matters.

Yet there are a couple of caveats. For one thing, the book is rather overlong and would have benefited from some judicious cutting. Though impeccably researched and engagingly presented, it spends fully four chapters explaining the background history of automatic weaponry, when surely one would have sufficed. Also, the book’s episodic, impressionistic feel – shifting from Vietnam to Afghanistan to Iraq and elsewhere – tends to rob it of a narrative focus and definable structure.

More seriously, Chivers seems to wrestle rather unconvincingly and inconclusively with the wider aspects of his story. The overarching context of the book is that of the profound changes wrought by the miniaturisation, simplification and democratisation of automatic weaponry, as exemplified by the AK-47. The original automatic gun – the Gatling – resembled an artillery piece and required a crew of men to fire it, while the Kalashnikov is about the size of a tennis racquet, the weight of an axe and can be had for around $200. There is a very valid point to be made here, but Chivers does not quite make it coherently or explicitly enough, almost preferring the argument to materialise incidentally as he goes along.

Yet, these complaints should not detract from a formidable feat of research and writing. Chivers’ story of the Kalashnikov is a fascinating and complex one, which encompasses both the darkest days of the Cold War and the asymmetric warfare of the early 21st century and features illuminating asides on technological developments and wider strategic concerns. He has marshalled these myriad sources well and has surely produced the final word on one of the most brutally effective and iconic weapons of our times.