On the morning of October 21st, 1805, writes Christopher Lloyd, Nelson’s crushing defeat of the combined naval forces of France and Spain won for Britain an unchallenged mastery of the seas that was to last for over a hundred years.

“It is only necessary for me,” wrote Joseph de Maistre when adumbrating a theory of history later adopted by Tolstoy, “to cite for you those modern battles, famous battles, of which the memory will never perish, battles which have changed the face of Europe, which were only lost because such or such a man believed they were lost. It is morale which loses battles, and it is morale which wins them.”

Trafalgar, as much as Austerlitz, is an admirable illustration of this view. On two critical occasions, Admiral Villeneuve, over-conscious of the weakness of his fleet, turned back from what he had set out to do, thereby delivering himself into the hands of an enemy whose morale was such that enormous risks could be taken with impunity.

“Perdidos!” exclaimed a Spanish captain, as he turned his men up to prayers when Villeneuve ordered the Combined Fleet to wear in succession on the morning of October 21st, 1805. 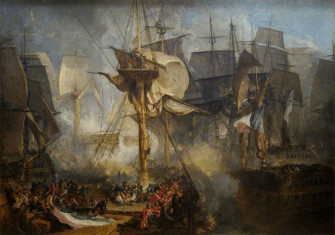 Nelson, Trafalgar and the Meaning of Victory 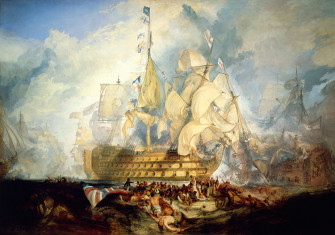 The Navy and the Napoleonic Wars