The head of Japan's Second World War government was executed on Dec 23rd, 1948 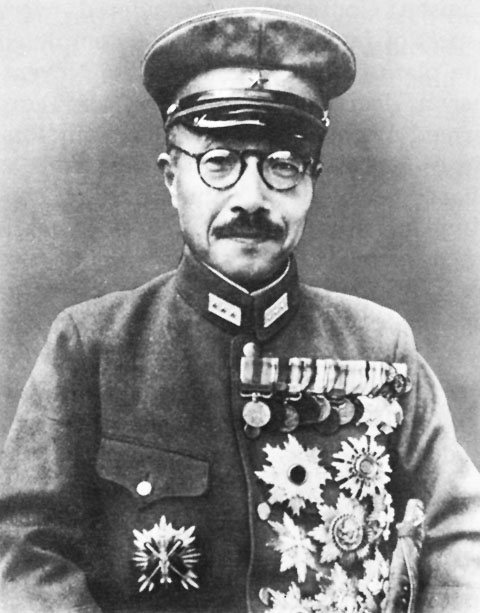 The dropping of the atomic bombs on Hiroshima and Nagasaki in August 1945 forced the Japanese government into unconditional surrender and the country, which was in a state of collapse, was occupied by Allied forces under an eleven-nation commission headed by the United States, the Soviet Union, China and Britain. In practice, however, Japan was ruled by the Americans under General Douglas MacArthur who, so far as he took orders at all, took them from Washington. His authoritarian style would cause far more resentment in Washington than it did in Japan.

The main purposes of the occupation, achieved in remarkably short order, were the disarming of the Japanese armed forces, the introduction of democratic institutions and the repair of the devastated Japanese economy. Meanwhile, there was the question of the prosecution of Japanese war criminals, headed by Tojo Hideki, nicknamed ‘Razor’, a high-ranking army officer from a military family. He had been minister for war from 1940 to 1941 and then prime minister until 1944. Regarded as a personification of ruthless Japanese militarism, he was held responsible for the murder of millions of civilians in China and the Far East and of thousands of Allied prisoners of war.

When his arrest was ordered in September, Tojo tried to commit suicide. According to one story, he got a doctor to put a charcoal mark on his chest to indicate the right place to shoot himself in the heart and fired a shot into his body, but somehow the bullet missed his heart and ended up in his stomach. According to another, he fired four shots at himself without success. Lying bleeding profusely when the military police and accompanying journalists burst in, he was heard to murmur a polite apology for taking so long to die. The press photographers put the gun back in his hand and told him to hold on to it before snapping their pictures of him. He was taken to hospital and patched up, before being moved to the Sugamo Prison in Tokyo. He was bitterly condemned by some Japanese for failing to kill himself as honour demanded.

The trial of twenty-five ‘Class A’ war criminals by an international tribunal with judges from eleven countries began in Tokyo in May 1946. The chief prosecutor for the US, Joseph Keenan, issued a statement that ‘treaty-breakers should be stripped of the glamour of national heroes and exposed as what they really are – plain, ordinary murderers’. In November 1948, all the accused were found guilty. There were misgivings at the time about whether all the right people had been tried. Some thought that Emperor Hirohito should have been in the dock, but MacArthur considered it essential to protect him so that the changes the Americans were introducing in Japan would enjoy the imperial blessing. With hindsight he was surely right, but the decision was distinctly controversial.

There were other notorious figures who were not prosecuted. One of them was Ishii Shiro, who had been head of Japanese bacteriological and chemical warfare research. His notorious Unit 731 in Manchuria had carried out vicious experiments on captive Mongolians, Koreans, Russians and Americans, some of them prisoners of war, some civilians, and some Japanese criminals. The experiments included injecting American prisoners with bubonic plague. The Americans have since been accused of protecting Shiro and his subordinates in return for getting the results of the experiments.

On the whole, MacArthur and the Americans were agreeably surprised by Japanese acceptance of the trials. Indeed, there were some who were horrified by the atrocities the trials revealed. In December 1947 the monthly magazine Van caustically commented: ‘When those war advocates now called “war criminals” first appeared on the stage, we welcomed them with loud applause. When they fell, we followed along and spat on them. And now we have virtually forgotten about them.’

In the end, Tojo was found guilty on various counts of waging wars of aggression in violation of international law and of ordering inhumane treatment of prisoners of war and others. He and six other defendants were sentenced to death and the rest to prison sentences. Many others were tried in other proceedings and either executed or imprisoned.

MacArthur declined to commute the death sentences, a decision he found very difficult to make, and Tojo and the six others were hanged in the Sugamo Prison. On the scaffold they wore American army work clothes with no insignia of any sort. It was a few days before Tojo’s sixty-fourth birthday. His remains were buried in the Yasukuni Shrine with those of more than two million Japanese war dead, including more than 1,000 convicted war criminals.

Visits to the shrine by Japanese prime ministers and leading politicians still cause controversy. The Sugamo Prison was demolished in the 1970s and all that is left of it is a stone inscribed in Japanese with the words, ‘Pray for eternal peace’.