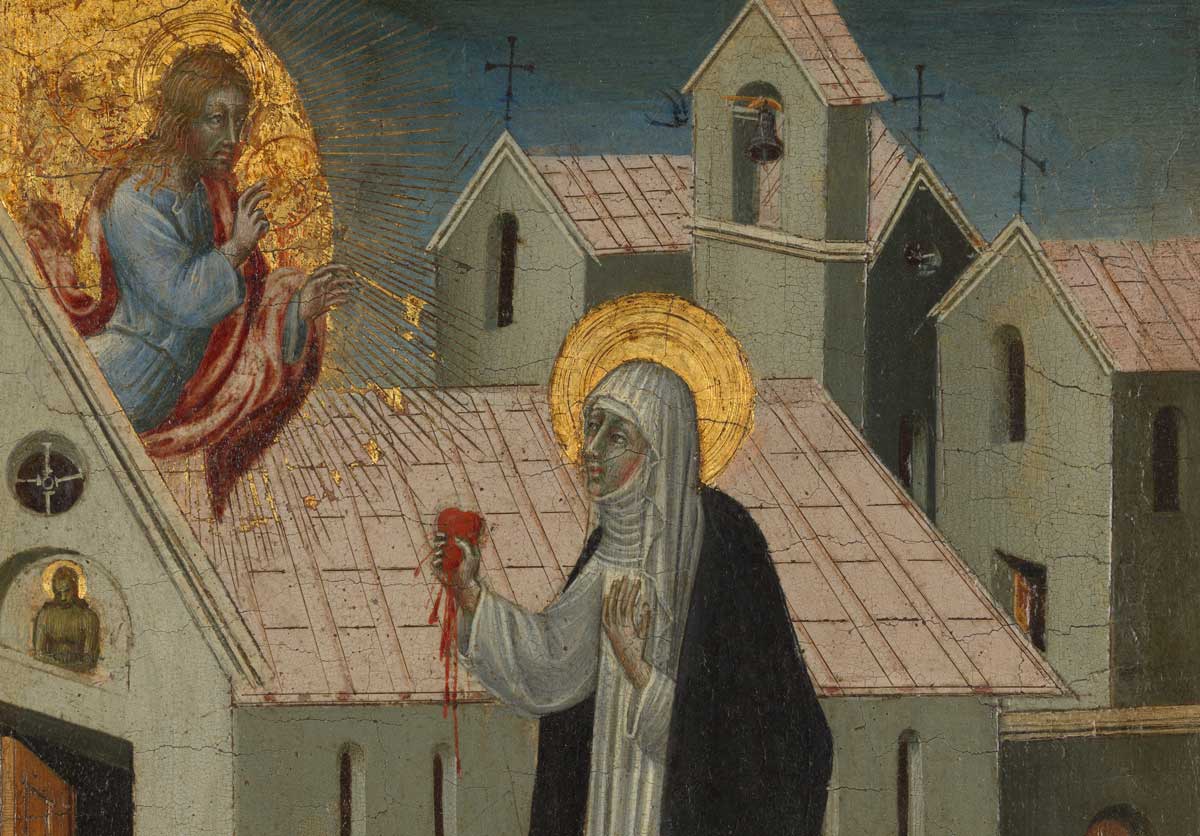 The saint’s family home can still be seen in Siena. Her father, a comfortably off dyer called Giacomo di Benincasa, had already had 22 children when she was born, with a twin sister who did not survive. The generally accepted date is 1347. Catherine early showed an intense fascination with Christianity, accompanied by invincible determination to have her own way. She later recalled a vision of Christ in majesty she had as a child, which inspired ecstasy. In her teens she utterly refused to consider marriage and learned to overcome opposition by fasting until her parents gave way and let her do as she wished.

Still living at home Catherine joined the Dominicans’ women’s section as a Sister of Penitence. In or about 1368 she experienced a ‘mystical marriage’ with Christ, who told her to emerge from her withdrawal at home and enter the world. As she would say in a letter years afterwards: ‘My life is consumed and distilled into this sweet Spouse, so that I in this way accomplish what the martyrs did with their blood.’ Still practising austerities and experiencing mystical ecstasies in private, she devoted herself to helping the poor and the sick and her magnetic personality attracted followers. Fasting became a habit with her and she often vomited up what little she had eaten. (Today she would be diagnosed with anorexia.)

Catherine and her disciples started travelling about, calling on people to repent and embrace total love of God and campaigning for peace in Italy and a new crusade against the Turks. She started dictating letters – she may never have learned to write – to people in authority, including Charles V of France, and wrote to Pope Gregory XI, urging him to move the papacy from Avignon back to Rome. She went to Avignon to see him in 1376 and he did restore the papacy to Rome before his death in 1378. His successor, Pope Urban VI, facing schism in the Church, called her to Rome to support him. She had now completed her Dialogue or spiritual testament and she died in Rome at her house on today’s Via di Santa Chiara on a Sunday in 1380 at the age of 33.

Catherine was buried at Santa Maria Sopra Minerva in Rome, from which miracles were reported. In 1383 her head was taken to Siena in a reliquary and carried through the city to the Dominican church in procession, attended by her mother, now 89 years old, and other members of the family. Her biography was completed in the 1390s by her devoted friend Raymond of Capua, who was now Master General of the Dominicans, and she was canonised in 1461 by Pope Pius II, who was himself Sienese.