Maggie Black takes a look at the seasonal celebration of All Saints and serves up a Hallowe'en recipe. 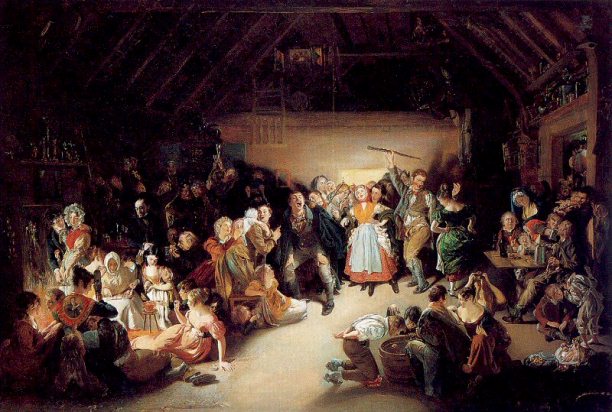 The traditional celebration of Hallowe'en with its turnip-lanterns, mulled ale and noisy, cheerful, slightly risky games involving 'playing with fire' seems a curious way to start the short yet solemn Church feast of Hallowtide, which consists of the eve and feast of All Saints followed by All Souls' Day (October 31st to November 2nd).

It should not surprise us, because Hallowmans was the feast which the early Church took over most completely from the great pagan, Celtic feast of Samhain which celebrated the end of summer and the harvest, together with the start of winter and the New Year. The Celts believed that, on the eve of the festival (our own Hallowe'en), the dead returned to walk the earth for a night and a day and with them came the spirits of evil, at their most potent. Fires blazed on every hilltop to purify the land, defeat the evil ones and encourage the wasting sun to revive. Ceremonial dancing, noisy games and harvest-end rituals took place around these fires with drinking of the herbal ales for which the Celts were renowned. Seizing their chance to question as well as to honour and propitiate their dead, the Celts chose this time for divination rituals too.

The force and vigour of the ancient beliefs overrode all newer ones and these practices survived the advent of Christianity, in barely translated form at first, and only very gradually died out. The evil spirits became witches, and the bonfires burned them in effigy (for instance the Shandy Dann at Balmoral where, we are told, Queen Victoria much enjoyed the fun). A great number of divining rituals and games, often involving apples, nuts and fire, persisted; apples and nuts were the last-harvested fruits. Even the old herbal ale: survived as mulled ale or punch with roasted apples floating in it.

The more significant pre-Christian practice of impersonating the dead and other spirits and by so doing protecting oneself and others from their spectral power also continued. Sometimes this was acted out by processions of young adults (later children) wearing or carrying grotesque masks and often headed by a youth carrying a horse's skull (as, for example, the Lair Bhan in co Cork, or the Hodening Horse in Cheshire). They went from door to door or visited friends and neighbours, collecting money for food. Before Christian times, such largesse had no doubt been given to feast the dead spirits in return for the promise of fertility and protection from evil provided by the visit. But in pre-Reformation Christian Europe, it provided candles and masses for the dead and snacks for the living.

We have transferred the ancient Tenalas or Hallowmas bonfires to Guy Fawkes Night, and children beg pennies with blackened or masked faces on November 5th too. But what seems more significant is the very large number of local Hallowe'en customs, widely varied but all expressing the same ancient pagan hopes and fears, which still take place, almost unchanged, on October 31st, both in annual folk ceremonies in scattered hamlets and in the (now frivolous) Hallowe'en games we still know. Their variety and noisy, cheerful vitality are the more marked if we compare them with the customs connected with the Feast of All Souls immediately after All Hallows. The object of this feast, created by the early Church, was to remember the dead, and to seek alms to pay for prayers for those in Purgatory, to ease their way to Paradise – not back to earth.

In Catholic and Orthodox Europe, this attempt to divorce respect for the dead from the idea of their return to earth failed completely. The souls in Purgatory, so men still believed, were all allowed home for two days, although without their pagan familiars. Candles were lit – and still are – on their graves and in the windows of houses to light them home. Fires were kept burning to warm their cold bones. Food and drink were left ready.

In Britain, the alms took the form, not of cash for candles but cake. Bands of 'soulers' went from house to house singing ancient 'souling' rhymes; and small loaves, quickbreads or cakes were handed out to them to be eaten hot while saying a prayer for the departed. Even after the Reformation, when prayers were officially no longer thought necessary to ease the passage of souls to Heaven, the idea that the giving and receiving of food by the living somehow benefited or pleased the dead persisted, for 'souling' continued, although the souling rhymes became straight begging-songs.

An old 'soul-caking' play (in fact a mummers' play) survives in Cheshire. The songs have lasted too, but with little meaning now because the soul cakes once baked in great batches, as described by John Aubrey, are no longer made. At least, I have not been able to trace an old original recipe still being used. The sole survivor seems to be the traditional parkin now eaten at Hallowe'en which is still sometimes called Har Cake or Soulmas Cake.

Perhaps the soul-cakes disappeared because they varied too much from place to place to become widely familiar and thus traditional. If there had been just one kind of 'soul-cake' the commercial bakeries might have taken it up when home baking declined. It seems more likely however that with diminished religious significance, 'souling' and the giving of 'soul-cakes' came to seem something of an anti-climax after the cheerful, noisy festivities of Hallowe'en with their hinted spire of danger in 'playing with fire'.

Set the oven to 325 degrees F / 160 degrees C / Gas Mark 3. Grease two 9 1/2 x 7 1/2 inch Yorkshire pudding tins or one larger roasting tin. Warm the fat and treacle in a pot in the oven to melt them. Mix all the dry ingredients except the bicarbonate of soda in a bowl. Mix the bicarbonate into the milk to dissolve it.

Pour the melted fat mixture into the dry goods, and add the bicarbonate and milk. Stir thoroughly, turn into the tin(s) and level the top. Bake in the smaller tins for 1 1/4 hours, in the larger one for 1 1/2 to 2 hours. Cool in the tin(s). Keep, well wrapped, in a cool place for at least 2 weeks before cutting. Serve cut into squares or bars.