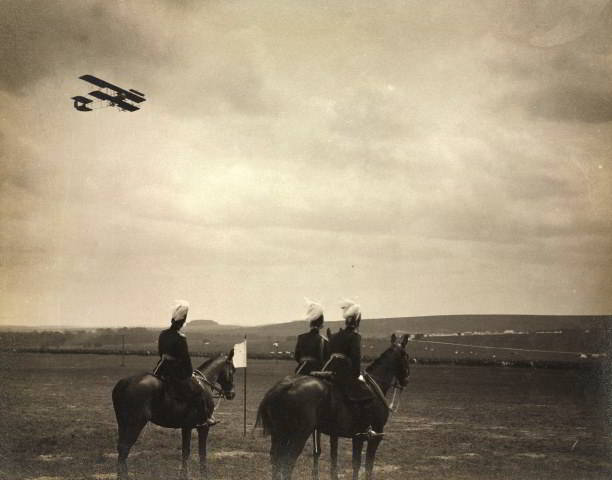 The development of aviation in the early 1900s raised the possibility of using aircraft in war. Attention at first focused on employing planes for reconnaissance, to spy on enemy troop dispositions from the air and to help direct artillery fire. Aerial combat and bombing came later.

In Britain the Royal Engineers already had a unit that used balloons for observation and in February 1911 the War Office ordered the formation of a small air battalion, equipped with aeroplanes. Curiously the battalion was to come formally into operation on April Fool’s Day. Pilots could come from any branch of the army but had to have a flying certificate from the Royal Aero Club.

Later in the year the Italians used aircraft in action against the Turks in their conquest of Libya. The Imperial General Staff in Britain set up a subcommittee, which in February 1912 recommended the creation of a new flying arm with separate military and naval wings. In April the Royal Flying Corps (RFC) was founded by George V. It would last until 1918, when it became the principal element of the Royal Air Force.

The air battalion of the Royal Engineers became the RFC’s military wing, with both balloons and aeroplanes. Number One Squadron of the RFC manned the balloons. Numbers Two and Three flew the aeroplanes. Confusingly the air battalion’s aeroplane section became Number Three Squadron RFC, but claimed precedence over the others, as it had been the first unit to fly heavier-than-air machines, not balloons. Number Three’s motto stated the matter firmly: Tertius primus erit (‘The third shall be first’). By 1914 two more squadrons, Four and Five, had been created. The naval wing was separated off in 1914 as the Royal Naval Air Service (RNAS).

The new organisation’s motto was Per ardua ad astra, which the RAF would inherit. It is often rendered as ‘Through adversity to the stars’, but ardua is sometimes ‘struggle’ or ‘hardship’. In July 1912 the RFC suffered its first fatal crash, on Salisbury Plain. The pilot and the observer were both killed, but an order was promptly issued: ‘Flying will continue this evening as usual.’ That began a lasting tradition.

The Germans invaded Belgium on August 3rd, 1914 and Britain declared war the following day. Around mid-August the RFC flew its aeroplanes across the Channel to join the British Expeditionary Force (BEF). The RFC was hugely outnumbered by the French air force, but it quickly began to make its contribution and early in September the BEF commander Sir John French commented approvingly in an official dispatch on the vital help RFC reconnaissance had given his operations in Belgium. In that month the RFC began taking aerial photographs and in 1915 J.T.C. Moore-Brabazon of the RFC designed the first efficient aerial camera. The first RFC planes had Union Jack badges, but in 1915 the roundel of three circles, red at the centre surrounded by white then blue, was adopted from the French air force badge, with the colours in reverse order.

The RFC became increasingly aggressive, especially under Hugh Trenchard, a former infantry officer who was its commander in France from August 1915. The casualty toll mounted accordingly. RFC planes had no parachutes. Dogfights between Allied and enemy pilots swooping about the sky in flimsy-looking biplanes became more common and Allied pilots took to strafing German troops and installations with machine guns or bombs. The word ‘strafe’ was coined from the German verb strafen, ‘to punish’ (as in Gott strafe England).

RFC personnel won shoals of decorations and some fighter aces became national heroes, including Captain Albert Ball VC, who crashed and died in 1917; Captain Lanoe Hawker VC, who was killed in 1916 in a dogfight with the German ace Baron von Richthofen; and Major Edward ‘Mick’ Mannock VC, killed in action in his Sopwith Camel in 1918. Those who survived to play leading roles in the Second World War included Hugh Dowding, Arthur ‘Bomber’ Harris, Charles Portal and the Canadian ace Billy Bishop VC. Other RFC figures included the cricketer Jack Hobbs, who joined up as an air mechanic in 1916; Biggles author W.E. Johns; and the ballroom dancer Vernon Castle, who was killed in a crash in 1918.

On April Fool’s Day 1918 the RFC and the RNAS were reunited into the Royal Air Force, under the newly created Air Ministry. By the end of the war the total RFC, RNAS and RAF casualties were more than 9,000 killed or missing and more than 7,000 wounded.