A series of archaeological discoveries off the coast of Sicily reveal how Rome turned a piece of lethal naval technology pioneered by its enemy, Carthage, to its own advantage, explains Ann Natanson. 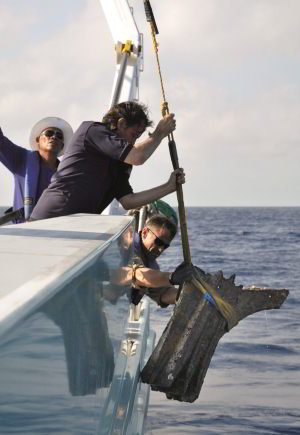 In September last year a bronze naval ram was brought to the surface near Levanzo, one of the small Egadi islands off western Sicily. This was the third ram to be hauled up in that area in the last ten years. Although no wood from shipwrecks has been found nearby, these bronze objects of puzzling shape have provided convincing proof that the Battle of the Egadi took place there.

This was the battle, fought in 241 bc, that ended the First Punic War. It was Rome’s first decisive naval victory; Carthage was no longer Queen of the Seas. Polybius (c. 200-118 bc) called the conflict ‘the longest and most severely contested war in history’. This epic struggle between Carthage and Rome lasted 23 years during which, it is estimated, more than a million combatants lost their lives. The peace treaty gave Rome control at last over the prosperous and productive island of Sicily, Spain and the western Mediterranean. Much valuable booty was paraded in Rome. For the Carthaginians it was a bitter defeat with long-lasting effects. Following Punic custom Admiral Hanno was crucified on his return to Carthage.

The Roman republic’s attempts to defeat the Carthaginians on land and sea had continued over the years since the war started in 264 bc, in spite of many defeats and only a few minor victories. Finally, to learn their enemy’s secrets, a captured Punic warship was dragged ashore and precisely copied section by section; particularly intriguing was the powerful bronze beak or ram that was attached to the ship’s bows at water level.

Sharp rams made of wood had been fitted on warships for several centuries before then, as shown on Attic vases of the 6th century bc. The rams made in the 3rd century bc, however, were different: they were cast in bronze with complicated internal construction allowing them to be tightly riveted to the outside of the bows. The rams resemble three stout shovels cast together, presenting a triple-bladed weapon to the enemy boat. The effect could be lethal. With expert rowers trained to turn their vessels sharply, they could aim for the flank of an enemy ship, cutting through banks of oars and boring a metre-wide hole at sea level, quickly sending the galley to the bottom.

At the Battle of the Egadi the Romans had 300 ships, the Carthaginians 700, of which 250 were battle galleys and the remainder were supply ships. The final tally was said to be 50 Carthaginian ships sunk and 70 captured with their crews; the rest escaped. Until recently no precise clues had fixed the location of the battle. Some believed it had taken place close to Favignano, the largest of the Egadi islands. One of its beaches, called Cala Rossa, was a reddish colour; a myth arose that it had been stained by Punic blood.

More convincing evidence was discovered in 2004 after Sebastiano Tusa, a Palermo-based archaeologist, studied documents detailing weather conditions on the day of the battle, March 10th, 241 bc (rough and windy) and the placement of Punic settlements in the area. A convoy of Carthaginian ships had set out to bring urgently needed supplies to a Punic encampment close to Mount Erice. Their route, with a westerly wind, would have taken them close to the smallest Egadi island, Levanzo.

Tusa knew the Egadi area very well. He listened to locals from the port of Trapani and to divers exploring the Sicilian coast and discovered that a large bronze ram had been dredged up by fishermen near the Egadi that year and sold to a Trapani dentist. The divers reported a huge pile of lead anchors underwater on the east side of Levanzo. This fitted with the story that the Roman admiral, Lutatius Catulus, had given orders that anchor ropes had to be cut instantly on his signal, freeing his ships to make a surprise attack.

The dentist’s ram was seized by police responsible for protecting antiquities and put on show in Trapani and in Rome’s Castel Sant’Angelo. This ram became known as Egadi 1. It was 89 cm long and weighed 100 kilos, a handsome if mysterious object. The ram’s exterior bore Latin inscriptions on the top fin mentioning the names of two quality control experts who had checked its manufacture, proving also that the ram had belonged to a Roman ship.

Following the interest generated by Egadi 1 Tusa made an agreement with an American research team, the RPM Nautical Foundation headed by George Robb, allowing use of its research vessel Hercules, equipped with a multibeam echosounder and a small underwater vehicle, referred to as a ROV, which was used to explore anomalies. With this system there is little need for divers.

In June 2008, while scanning the seabed around Levanzo from the ship above, a second ram was seen half buried in the sand. It was winched to the surface from a depth of 80 metres. It had obviously been damaged in combat and was missing more than 40 per cent of its upper fin. Egadi 2 was 90 cm long and weighed 80 kilos.

The third ram, Egadi 3, was found last summer by the same team, three miles to the north-west of Levanzo. It was lying on its side on the sandy seabed at a depth of 80 metres. Larger than the other two at 113 cm long and weighing 130 kilos, it was in perfect condition. The inner channels of the ram had small pieces of wood still adhering to the inside, important for carbon dating. Also, quite uniquely, it bears the fingerprints of a bronze-worker who had pressed the mould into position at an early phase of the casting. Fine, stick-like engraving on one side of the upper fin turned out to be Punic writing with a dedication ‘May this weapon destroy the enemy ship’.

After finding the rams, Tusa said:

I was completely convinced my theory was proving correct. Having read historical accounts and knowing the area’s topography, it was impossible that the Carthaginian fleet had been aiming to land at Trapani, as some believed. The only possibility for them to land safely was some distance to the north. The first good landing point was Bonagia Bay on the north-west coast of Sicily beyond Erice.

The Romans knew the importance of rams or rostra. After victories against ships equipped with them, captured bronze rostra were set up on a column to commemorate the event, along with a description of the battle and the name of the commander responsible.

One such colonna rostrata was on show for centuries in the Roman Forum, inscribed:

Caius Duilius, the consul, was the first of the Romans to celebrate a triumph for a naval victory, after having defeated the Carthaginians with his fleet. For that reason, a statue was erected to him in the Roman Forum together with a column of rostra as a result of a decision of the Senate, as various authors have related.

The inscription was copied by Antonio Lafreri in 1575 for his illustrated guide to Rome, Speculum romanae magnificentiae.

To date four rams have been found around Sicily, including one, unrelated to the battle of the Egadi, found off Messina. There is another in Tuscany which has not yet been studied. Other countries have found or bought rams. There is one in Bremen, one in Piraeus and one that was in Cambridge, found by a British navy diver off the Libyan coast. This was returned last year to the Museum of Libya in Tripoli. The ninth, the largest and possibly the most beautiful, was found underwater close to Athlit in northern Israel. It has some precious remains of the ship’s wood in its interior.

The search for rams is a work in progress, exciting interest in scholarly circles. Robb and his vessel return to Sicily in September when the hunt for more rams starts again, memorials to an epic victory.

Ann Natanson is a journalist based in Rome who specialises in maritime subjects.