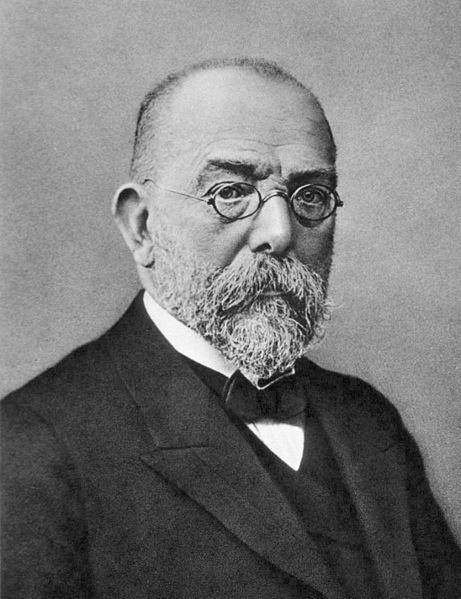 Few of its recipients can have deserved the prize more than Robert Koch. At the time it was considered extraordinary that he had not been given it already, and his biographer Thomas D. Brock said ‘one cannot even imagine how medicine would have developed without Koch’. One of the founders of modern bacteriology, he identified the tuberculosis and cholera bacilli, traced the life cycle of anthrax and discovered how sleeping sickness is transmitted. ‘Koch’s postulates’ are the fundamental basis for the study of all infectious diseases and his work was hugely influential in the field of public health. The Nobel Prize was presented to him in Stockholm the day after his sixty-second birthday.

Koch started his career as a doctor in German provincial towns. He was in practice in Wollstein (later Wolsztyn in Poland) when his wife gave him a microscope for his thirtieth birthday. He created a small laboratory for himself in part of his consulting room, curtained off and equipped with the microscope and a home-made incubator. A local outbreak of anthrax inspired him to study organisms related to the disease and he established the disease’s lifecycle and succeeded in transmitting it to mice.

As a result, in 1880 Koch was appointed to a post at the Imperial Health Office in Berlin, where he turned his attention to tuberculosis. In 1882 in a lecture to the Berlin Physiological Society he anounced that he had isolated and succeeded in cultivating the tubercle bacillus, responsible for all forms of the disease. He spoke slowly and haltingly, but his audience listened in stunned admiration and Paul Ehrlich, who would win the Nobel Prize for Medicine himself in 1908, called it ‘the most majestic scientific event in which I have ever participated’.

In 1883 Koch travelled to Egypt and India to investigate the causes of cholera, discovered the cholera bacillus, tracked its transmission by way of polluted water and pointed out that it could be controlled by keeping drinking water clean. In 1890 he announced the discovery of a cure for tuberculosis, but in the major disappointment of his career, it turned out not to work. However, as head of a new Institute for Infectious Diseases in the 1890s Koch investigated leprosy, bubonic plague and malaria with fruitful results. In 1896 he went to Africa to study rinderpest in cattle and developed a vaccine against it. After his return from Stockholm he led the German Sleeping Sickness Expedition, which studied the disease in Africa and traced the tsetse fly’s role in it. He continued hard at work until his death in Baden-Baden in 1910, aged sixty-six.