Robert Grosseteste, Bishop of Lincoln, died on October 9th, 1253, at his favourite manor house at Buckden in Huntingdonshire. 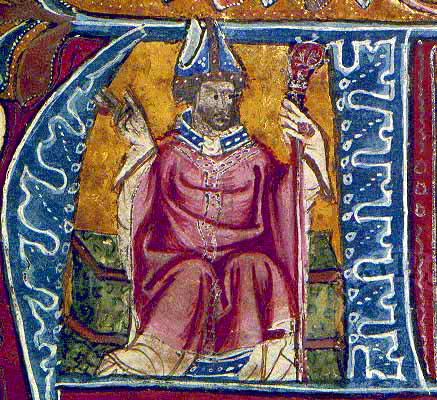 Described as ‘a medieval Dr Johnson in his powers of mind and personality’, Robert Grosseteste (Bighead or even Fathead), Bishop of Lincoln, was probably in his eighties when he died at his favourite manor house at Buckden in Huntingdonshire. A leading Biblical scholar and commentator, he also wrote extensively on philosophy and science, and his translations included Aristotle’s Nicomachean Ethics and Physics.

Grosseteste came from the lower ranks of society. He hauled himself up by his own bootstraps and he believed that the fundamental duty of the Church was pastoral, the care of souls. He explained what he meant at Lyons in 1250. ‘The pastoral charge does not consist merely in administering the sacraments, saying the canonical hours, celebrating masses, but in the truthful teaching of the living truth, in the awe-inspiring condemnation of vice and severe punishment of it when necessary. It consists also in feeding the hungry, giving drink to the thirsty, covering the naked, receiving guests, visiting the sick and those in prison … By the doing of these things is the people to be taught the holy duties of the active life.’

Lincoln was the largest diocese in England, stretching from the Humber to the Thames and containing about one fifth of the entire population of the country. Appointed bishop in 1235, Grosseteste descended on it in the spirit of a bull ushered into a nice, neat china-shop. According to the chronicler Matthew Paris, he regarded himself as personally responsible for the spiritual welfare of every individual in the diocese. Anything that stood in the way – civilised precedents, hallowed customs, accepted bendings of the rules – he attacked with a brutal truculence that aroused resentment and opposition, and he quarrelled fiercely with the clergy of Lincoln Cathedral. He had an equally high-handed way with the monasteries in his diocese and in his first year as bishop deposed no fewer than eleven abbots and priors. Grosseteste had no gift for compromise. The king and the pope would both feel the lash of his tongue and Pope Innocent IV eventually gave him up as unmanageable.

Matthew Paris observed the new bishop from the safety of the great abbey of St Albans, which was effectively protected by papal privileges against interference from even the most fearsome prelate. As time went by, the critical chronicler began to warm to a man of indomitable independence of judgement, affable friendliness and massive spiritual presence. He particularly approved of the bishop’s repeated scathing attacks on the worldliness, greed and corruption of the papacy.

At the papal court in Lyons in 1250 Grosseteste denounced the pope and the cardinals to their faces for ‘acting contrary to Christ’. The papal see, he told them, ‘the throne of God, the sun of the whole world…has been perverted and it has become a source of perdition and destruction.’ The pope and the cardinals were well accustomed to abuse and it seems clear that at the end of his life Grosseteste believed he had failed. On his deathbed he spoke bitterly of the state of the Church and even wondered whether Innocent IV might be Antichrist. A century later, he was rediscovered by Wycliffe and revered by the Lollards, but their opponents also found plenty to suit them in his work. His biographer, Sir Richard Southern, said that, ‘He was a man difficult to please and difficult to follow.’