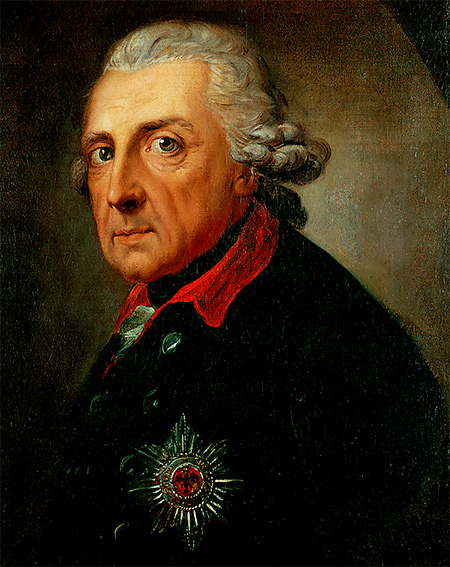 At his accession in 1740 Frederick the Great of Prussia launched a struggle with Austria for the mastery of Germany which was  not settled for another hundred years. Highly intelligent and cultivated, he had the advantages of a large and efficient army, a well-filled treasury and a complete lack of scruple.

The contest with the Hapsburgs was sharpened by the fact that Frederick and Maria Theresa of Austria personally loathed each other. Prussia  gained territory in the War of the Austrian Succession in the 1740s. The Seven Years War of 1756-63, which would involve Prussia and Britain on one side against Austria, France, Spain, Sweden and Russia on the other began when Frederick invaded Saxony in 1756.

Frederick knew that a formidable coalition of European powers had assembled against him and decided to attack first. Announcing that Maria Theresa’s hostile intentions had forced him into action despite his well-known love of peace, he led 58,000 men into Saxony, telling his sister Wilhelmina that he was off to pay a little visit to his fat neighbour, the Saxon Elector. On the face of it, Frederick was not invading, but merely passing through on the way to Bohemia, which was Hapsburg territory, but the Prussians  swiftly took Leipzig and Dresden, while Frederick’s sanctimonious talk about protecting Protestantism pleased his British allies, as it  was meant to. The Saxon army took refuge on the heights of Pirna, near Dresden, where the Prussians  settled down to starve them out. They were short of supplies and the Prussian commander wrote to Frederick on September 12th: ‘I hope to get them cheap in a few days’ time.’ On the following day Frederick led his main force on into Bohemia, where he would set siege to Prague.

A fierce seven-hour battle against the Austrian  army at Lobositz in Bohemia on October 1st gave the Prussians at least a nominal victory and on October 14th the Saxons at Pirna capitulated. Their officers went free, but in a previously unheard-of step, the men were conscripted into the Prussian army and organized into ten regiments under Prussian officers (many of the Saxons deserted later). Frederick’s siege of Prague did not succeed, but he defeated the French, the Austrians and the Russians in 1757 and 1758, and the war, which turned out hugely to Britain’s advantage, weakened Austria and France, and made Prussia a first-rate military power. By ­Frederick’s death in 1786 he had doubled ­Prussia’s size. 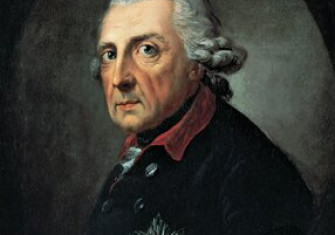