The creator of modern Turkey died on November 10th, 1938. 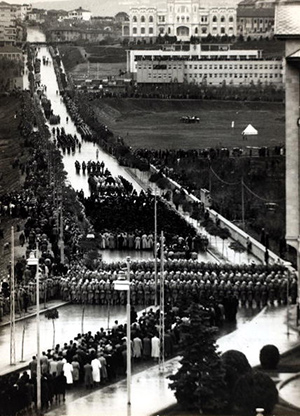 The key figure in the creation of modern Turkey was born in 1881 in Salonika in the Ottoman Empire (now Thessaloniki in Greece) to a Turkish Muslim family in modest circumstances. His father was a minor customs official. The boy was nicknamed Kemal (‘the perfect one’) by a teacher at school and kept it all his life. He became an army officer whose record in the First World War, notably including the repulse of the Allied attempt to force the Dardanelles at Gallipoli, made him a national hero. The Ottoman sultanate, which had chosen the wrong side in the war, was on its last legs and Istanbul was occupied by British, French and Italian troops, while the Greeks invaded Anatolia. Mustafa Kemal was the most effective leader of Turkish resistance and he and his supporters established a new Turkish government and capital at Ankara in 1920. Many prominent Turks joined him and under his lead a national assembly met and abolished the Ottoman sultanate. The Greek forces were driven out and the Republic of Turkey came formally into existence in 1923 with Mustafa Kemal as its president.

The new regime embarked on a dramatic policy of westernisation and secularisation, which included the building of roads and railways, the development of state-owned industry, the introduction of the Latin alphabet in place of Arabic script and the western calendar instead of the Muslim one. The traditional Islamic religious schools and courts were abolished, as were the dervishes. The regime also moved away from the traditional subordination of women, who were encouraged to shed their veils, given the vote in assembly elections and allowed to stand for seats.

Mustafa Kemal believed in Islam, but in a speech in 1925 he said that Turkey’s age-old political unity based on religion needed to be replaced by one based on nationality, with an acceptance of contemporary western civilisation. He disliked the fez, a symbol of faithfulness to Islam, which he considered a sign of backwardness and ignorance. ‘If we will be a civilised people,’ he said, ‘we must wear civilised international clothes.’ He himself went about in a panama hat and a suit, while the assembly passed the Hat Law, which made wearing the fez a criminal offence and the police confiscated them. Turks hurrying to obey put more or less anything they could find on their heads and in one village apparently the men grabbed a pile of women’s summer hats from a shop and hastily donned them, complete with ribbons and feathers.

The salaam was also outlawed and the handshake took its place. Surnames were introduced in 1934 and the assembly gave Mustafa Kemal the surname Ataturk (‘Father of the Turks’), which no one else was permitted to use. The country was brought into the 20th century and the western world, while a strong new sense of Turkish national identity and pride was effectively fostered. Opposition was forcibly suppressed.

In his later years Ataturk lived in the stupendous Dolmabahce Palace in Istanbul, on the northern, European side of the Bosphorus, which had been one of the grand residences of the sultans. He had always been a lone wolf and while the regime was run by his trusted ministers he grew ever more reserved, solitary and remote. Long a heavy drinker (who enjoyed dancing, poker-playing and women as well), he suffered from cirrhosis of the liver and its associated problems, including attacks of grim depression and nervous tension. He spent his final months in severe pain.

Cirrhosis was not diagnosed until January 1938 and, when it was, Ataturk took little notice of his doctors. In March he came down with pneumonia. By June he could scarcely stand and, after some months resting on his yacht, when he returned to his palace in Istanbul he could not climb the stairs. Refusing to be seen on a stretcher, he had himself carried upstairs in an armchair, just managing to walk the last steps to his bedroom. After a coma in September he relapsed into unconsciousness again on November 9th. He died the next day, aged 57 and the bedroom clock was stopped at 9.05am, the time of his death, as it remains to this day.

His death drew a gigantic outpouring of grief from the Turkish people. His body was carried through a mourning Istanbul on its way to Ankara, where it was temporarily laid to rest, while a magnificent mausoleum was erected, with a museum in his memory. Begun in 1944, it was finally completed in 1953 and is visited by millions of people every year. Portraits of Ataturk hang in homes and offices, statues of him abound in town squares and he appears on Turkish banknotes and postage stamps. He is still far from forgotten.