The diarist began his work on January 1st 1660. 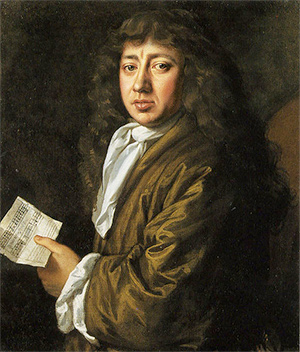 Starting out as the son of a poor London tailor, Samuel Pepys became his country’s top naval civil servant, a Member of Parliament and President of the Royal Society. He was also the author of the most famous and bestloved diary in the English language, renowned for its vivid picture of his times, his London and himself. Combining coverage of major political events with plenty of gossip and intimate details of his personal life, he wrote about his pleasures and sorrows, successes and failures, virtues and failings, finances, friends and acquaintances, sex life and bowel movements, quarrels and household crises, clothes and meals. Items range from the Great Fire of London to his first-ever cup of tea and being kept awake by the cat on a rainy night. He was interested in everything, especially in himself.

Pepys was 26 years old when he began the diary. He and his 20-year-old wife Elizabeth were living in a house in Axe Yard off Whitehall at that point. They had a live-in maid of 14, Jane Birch, and Pepys was working as a clerk in the office of a Treasury official. In December 1659 Pepys bought a notebook in a stationer’s shop, took it home to Axe Yard and painstakingly ruled margins in red ink on each of the 282 pages. He began the diary on a Sunday, on what was already widely regarded as New Year’s Day, though officially the year still started on March 25th. He made his entries with a quill pen in black or brown ink, using Thomas Shelton’s popular system of ‘tachygraphy’, or shorthand, which was described by its publisher in the 1630s as ‘the most exact and compendious method of Shorthand Swift Writing that hath ever yet been published’.

Pepys may have used shorthand for privacy; he kept the diary’s existence secret from almost everyone and in particular knew that his wife, with whom he had a loving but tempestuous relationship, would not be able to read it. In the summer of 1660 he moved up in the world when he was appointed clerk of the acts to the Navy Board at a salary seven times higher than before and he and Elizabeth moved to a house in Seething Lane, in the City of London.

Pepys continued his diary for a little over nine years, to May 31st, 1669, when he was worried about his eyesight, by which time it ran to one and a quarter million words (or an average of some 350 words per day). Fortunately for posterity, in his respectable old age he decided to preserve the diary. It was left to Magdalene College, Cambridge, and was first published in part in 1825.