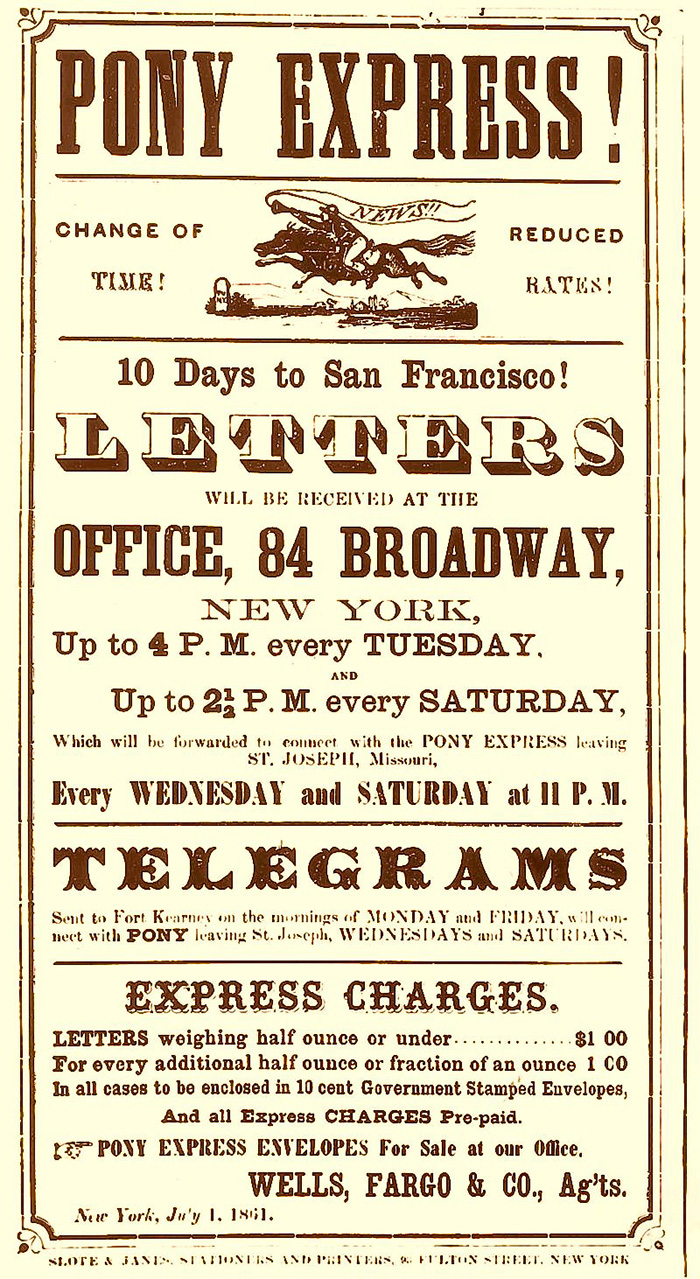 Although it lasted less than two years, the courage, stamina and resourcefulness of its young riders, careering day and night across prairies, mountains and deserts, heedless of storms, accidents and dangerous Indian country, gave the Pony Express a lasting place in the history and mythology of the Wild West.

By the 1850s the railroads from the east coast had reached the Midwest. From there freight, mail and passengers were carried on west by stagecoaches. The Pony Express was the brainchild of William Hepburn Russell, head of the lengthily named Central Overland California & Pike’s Peak Express Service Company, which ran stagecoaches from Kansas to California. It was not as profitable as Russell would have liked and he hit on the idea of carrying the mail far more quickly than a stagecoach could, by using individual riders. With the backing of a Democrat senator from California, William M. Gwin, Russell won a federal government contract.

Russell bought 500 suitable horses and stationed them along the route at intervals of about ten miles – the most a horse could gallop at full tilt – while advertising for ‘skinny expert riders willing to risk death daily’. There was no shortage of applicants, including the 14-year-old William Hickok, later the famous gunfighter and lawman ‘Wild Bill’ Hickok. Each of the 190 or so stations on the route had stables and a well. The riders were paid $25 a week, which in those days was good money. Each carried a gun, a waterbag and the mail, in a pouch specially designed to survive even if the horse and rider did not. Riders changed to a fresh horse at each station along the way and handed over to a new rider every 75 to 100 miles. The route ran close to 2,000 miles from St Joseph, Missouri, across Nebraska to Fort Laramie in Wyoming, on to Salt Lake City and Carson City, Nevada and then through the Sierra Nevada mountains to Sacramento in California. From there the mail went on to San Francisco by steamer on the River Sacramento.

The first riders set off from each end of the route at about 7.15pm on April 3rd, 1860. In St Joseph, Missouri, Russell and the mayor made speeches and when the first horseman to reach Sacramento arrived there on the 13th an excited crowd had turned out to greet him. In his pouch he had 49 items of mail and a copy of the St Joseph Gazette.

The service was brilliantly organised, but it was no match for the new transcontinental electric telegraph, whose first message was tapped out across the country in October 1861. Russell and his partners went bankrupt and the Pony Express was consigned to history.