The Spanish explorer landed in the New World on April 3rd, 1513. 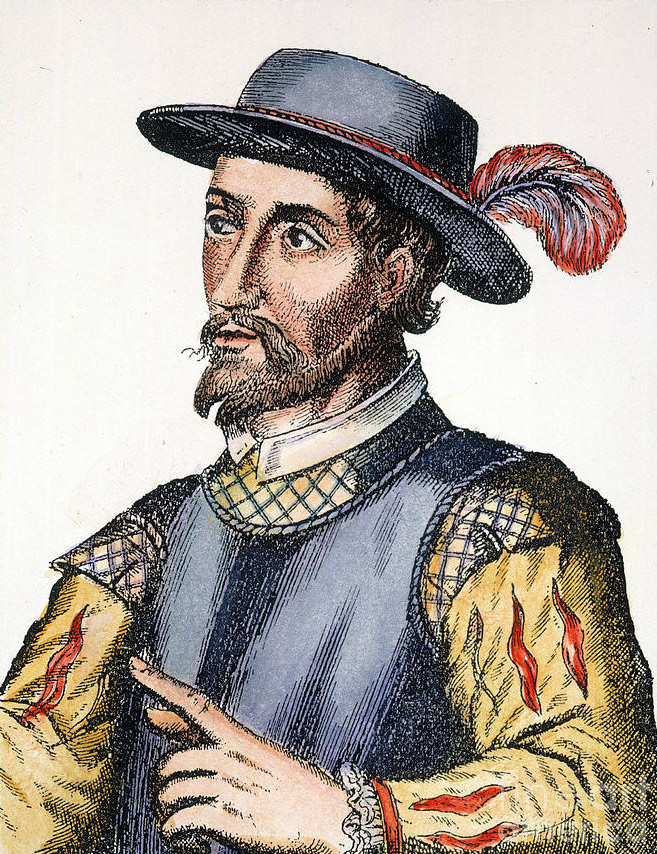 The most engaging story about the Spanish adventurer who discovered Florida for Europeans is that he went there in search of the fabled fountain of youth, which restored vigour and sexual energy to those who drank its water. Most historians now dismiss the tradition as itself a fable, but it is still alive and well in Florida. There is a certain irony in the fact that the Sunshine State has long been a favourite retirement haven for elderly Americans, who move there for their declining years.

Juan Ponce de León was born to a noble family in Spain in 1474 and in his teens fought against the Moors in Granada. In 1493 he sailed as a volunteer on Christopher Columbus’ second voyage to the New World, which took him to the island Columbus named Hispaniola (today split between the Dominican Republic and Haiti). He settled there and in 1508 led an expedition to what is now the island of Puerto Rico in search of gold, which he and his men duly discovered. He founded the Spanish colony there and was appointed governor. In 1513 he led three ships on an expedition that reached the east coast of Florida, according to tradition on April 3rd at the place where the city of Saint Augustine stands today. He named his discovery La Florida because it was close to the Christian ‘festival of flowers’, or Pascua Florida, and allegedly as a reference to the new flowering he expected to enjoy from the fountain of youth. After a few days Ponce de León sailed down the coast past the future site of Miami and further on south before returning to Puerto Rico.

In 1521 he led an expedition of 200 settlers with horses, cattle, farming implements and seeds for planting to establish a Spanish colony in La Florida, but when he and his party started to build a settlement they were attacked by the local Indians and he was mortally wounded by a poisoned arrow. He and his people retreated to Cuba, where he died. His body was taken back to Puerto Rico and given honourable burial before the high altar of the Dominican church in San Juan, the island’s principal Spanish settlement. His remains were later transferred to San Juan cathedral.

After further explorations and attempts to colonise Florida by the Spaniards and by French Huguenots, Pedro Menéndez de Avilés arrived in 1565 and founded a Spanish military base at Saint Augustine. He slaughtered the French and established the first permanent European colony on the mainland of what would become the United States. Saint Augustine is the oldest city in the continental US.

The story about Ponce de León and the fountain of youth, it seems, only developed after his death. The idea of such a fountain goes back for centuries in the Old World. Herodotus placed it in Ethiopia and other authors in India. The early Spanish empire builders in the Caribbean heard from local tribespeople about a rich and paradisal region called Bimini and Ponce de León’s voyage in 1513 was undertaken on the orders of the Spanish royal court to search for and colonise Bimini and any other undiscovered lands. The official document talked of finding gold and said nothing of a reinvigorating fountain, but the two ideas had already become linked. In 1535 a history of the West Indies by Gonzalo Fernández de Oviedo y Valdés said that Ponce de León had been hoping to find the rejuvenating waters of Bimini when he landed in Florida.

The tale was repeated by later authors and the tradition developed that the Indians in the Saint Augustine area enjoyed unusual longevity and that they showed Ponce de León the spring they used. He thought it must be the fountain of youth and drank its water himself. Long afterwards, in 1868, a man who bought land close to the harbour in Saint Augustine found a spring with a stone cross by it. In the early 1900s Mrs Louella Day MacConnell of Saint Augustine (known in the city as ‘Diamond Lil’) and her husband contrived to discover a document that described Ponce de León placing a stone cross beside the same spring, which enabled them to create a lucrative Fountain of Youth tourist attraction.

In 1934 workmen planting orange trees at the site came across human remains. The Smithsonian Institution in Washington DC sent a team of archaeologists, who discovered more than 100 skeletons there, dating from European and pre-European times. The result is today’s Fountain of Youth National Archaeological Park on the site of the old Spanish fort, with a reconstruction of the original Indian village. Visitors still drink the water from the spring and the park is one of Saint Augustine’s most popular attractions.